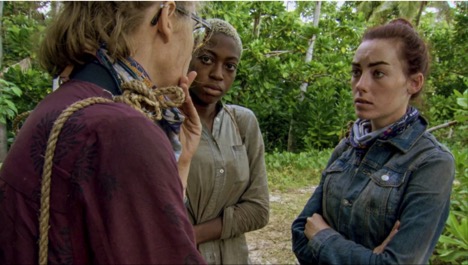 Sometimes post-merge flips on the majority alliance can be exciting. Sometimes they can feel like a slow march toward death. As soon as Desiree shares her story of the time in her life she was homeless, sparked by a bizarre confession of a starvation-induced dream Domenick had in which he and Laurel ate egg sandwiches prepared by Martin Sheen, I knew this episode would be the latter. Desiree accurately identifies that she is on the bottom of the Naviti alliance, and goes to the Malolos with the notion to flip, along with Angela and Chelsea, to take out Wendell, Domenick, and Kellyn, settling on Kellyn as her first target. The problem is that she is unaware of the tight bonds Laurel and Donathan have with Domenick and Wendell, making this a riskier plan than she had intended. These flips from the bottom to the top can work, but only if the people you want to flip with have nowhere else to go. This move makes sense for the Jennas and Michaels of the world who have nowhere else to go, but not for Laurel and Donathan who clearly have a path to the end, albeit with two people who are likely to beat either one of them at final tribal council.

The anguish of Laurel and Donathan over their two groups, the original Malolos and the Wendell/Domenick duo, seems as though it will loom large every episode until they are forced to make a choice, which gets delayed another episode due to Desiree’s insurgency. The conundrum they face is that, at this point in the game, they are losing next to at least one member of either alliance, since I find it hard to believe the jury wouldn’t vote for the handsome teenager who has pulled out several immunity idols, successfully lied about his age through the entire game, and survived despite being an underdog. To be clear, I don’t think that any of this makes Michael a particularly good Survivor player. None of these things are that hard, especially when one of the idol plays was a total waste, and there has always been someone lower than him on the totem pole to eliminate to help him survive (RIP Stephanie Johnson), but it does make for a flashy game, and how impressive your game actually was matters little in the eyes of the jury when compared to how impressive your game seems. The best case scenario for my dream team of Laurel and Donathan would be to go the distance with the Malolos and manage to escape the final four with Jenna at the end, though this road seems impossible at this point, unless they can pick up the stragglers in Angela and Chelsea, who still remain on the bottom of Naviti, but with one fewer ally. The good news for Laurethan (Donathel?) is that men are incapable of winning immunity challenges this season, which is slight consolation for the fact that women are incapable of finding idols.

At the reward, Donathan is left out of the schoolyard pick which is extremely rude and I will be having harsh words with each member of the cast for making this happen, and Angela winds up going to Ghost Island. Sebastian, Michael, Kellyn, Chelsea, and Jenna ride on a helicopter to have a picnic on the top of a mountain, and there are many jokes to be had about Sebastian talking about being high. Michael makes an obligatory effort to talk to them about shaking things up, which is promptly brushed off, reassuring Kellyn that her Naviti alliance is still in tact, the first of many times this episode in which Kellyn will demonstrate her confidence.

Meanwhile on Ghost Island, which Angela simply refers to as “Ghost” because she is a busy lady and doesn’t have time to say words, she gets to gamble her vote for a ⅔ chance at an advantage. She correctly takes it, knowing that within her alliance her vote will not be necessary. This is important because it demonstrates that prior to the reward challenge, Angela was unaware of Desiree’s plan. Desiree’s proposition hinges on Chelsea and Angela going with her, but this demonstrates that that was simply an assumption, and not something she talked to at least Angela about yet. This matters, because while the episode tries to convince us that Kellyn is oblivious and cocky to think Chelsea and Angela would never flip on her, she is potentially correct about Angela. Chelsea does end up voting for Michael, proving that Kellyn was at least partly mistaken, but it’s possible Kellyn completely had her finger on the pulse regarding Angela, and Angela never would have flipped. I hope she can use this to her advantage in bringing Angela even closer, ensuring that she is loyal to her over Domenick, who did not trust her not to flip and believed that she would, if and when the divide between Kellyn and Domenick/Wendell eventually materializes.

Another note about Kellyn and Domenick’s differing reactions to the news from Laurel of Desiree’s betrayal: While Kellyn has faith in her allies which may be a bit naive, Domenick’s reaction is downright demeaning. He refers to all of the women rallying together as “the weaker players,” coming after “the big players,” i.e. himself and Wendell. For now, he keeps it to confessional, but this kind of attitude is exactly the kind of thing that can come back to bite a finalist from the jury – thinking of yourself as superior to the others and more deserving, while brushing off any gameplay those he perceives to be beneath him have contributed. It’s condescending and honestly a little silly in modern Survivor to think that laying low is an invalid strategy, or an indication of “weakness.” This type of behavior, I believe, is why Desiree identified Kellyn as the biggest threat of the three power Naviti players. She has all of the strategic chops of Dom and Wendell, plus the challenge prowess and a sheer likability that at least Domenick may not possess. She has the ability at the final tribal to demonstrate a respect and kindness for the games of the jurors that is scary to someone who doesn’t want to sit next to her. Though Desiree made the wrong choice in targeting someone who was clearly loyal to her, to the point where Kellyn didn’t even believe Des was capable of flipping, rather than someone like Domenick who took Laurel’s word at face value, the logic of Kellyn being the biggest threat certainly tracks for me.

Michael and Donathan go on an idol hunt that is flushed with ridiculous hyperbole. Upon Donathan joining Michael on the search, Michael tells us he is chagrined because sharing that you have an idol with someone else is “one of the biggest mistakes you can make” in the game, which is patently false, since many successful idol plays have been executed when allies have the knowledge that you have it. Additionally, when Donathan finds the idol, which turns out to be Scot’s have of the super idol from Kaoh Rong, the note says that Scot trusting Tai to play his half was considered “one of the biggest betrayals in Survivor history” which is definitely true if Kaoh Rong was the first season of Survivor that you have ever seen. Donathan has to find the other half of the idol underneath the shelter, which appears to be not as difficult as one might think considering he can just reach underneath and grab it while sitting on top, but it provides some fun character moments for Donathan and deepens my disbelief that the editors have so criminally underused him in confessional.

After the immunity challenge, Desiree gets wind from Kellyn that her plan has been leaked. She immediately says, “Do you think this might be coming from Donathan or Laurel?” which is a weirdly specific and guilty-seeming accusation in an effort to throw blame on someone else. Desiree turns it around on Laurel in front of Wendell, saying that she is spreading lies, culminating in some deep confusion by Kellyn, who, because she is the sole steward of my own wants and desires, is still hell-bent on getting Michael out. I’m mad at Desiree for doing this now instead of waiting just one more week until another Malolo was out, when she still would have had the numbers, so that we could do this all without Michael in the picture. I must say, even with Desiree’s treasonous intentions, I still think getting out Michael is the right move here. Desiree has no army. As was proven this episode, Chelsea is her only real ally, whereas Michael could potentially have the four remaining Malolos, and has clearly demonstrated a knack for finding idols. Additonally, disregarding the information that we have as viewers of this episode, let’s say you are in Kellyn and Domenick’s shoes: You know for a fact that Michael is not working with you and will get you out at any opportunity. You have on hearsay that Desiree is working against you, and even though Dom is fairly confident, Kellyn knows that someone like Laurel who is in the minority has the incentive to start this kind of lie, should you really vote against the sketchy ally with no army, or should you vote against the confirmed enemy with idol hunting skills, a social game, and an alliance? I understand why they moved against Desiree, but I think Kellyn still had a point in arguing for Michael to go regardless of this whole situation.