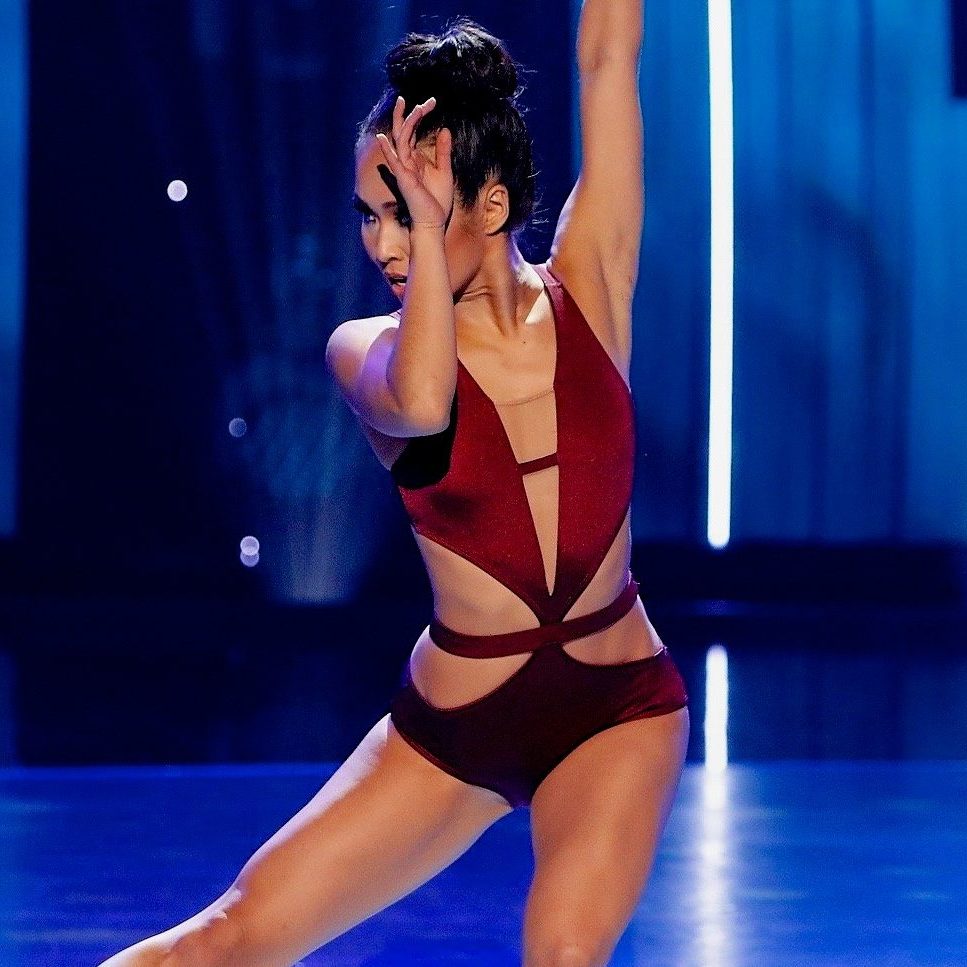 The great Lita Brillman and I covered So You Think You Can Dance for the RHAP network last summer. We avidly watched every episode and podcasted for hours about the new all-star coaches format and the excellent cast of dancers they selected from thousands of auditioners. My favourite female dancer of the season was Outstanding Reality Star nominee Koine Iwasaki, a stunning contemporary technician with a bubbly on-screen presence, a perfect connection with her coach/partner Marko, and the ability to infuse any dance with artistry and emotion whether it was an against-type hip hop, a ballroom style she’d never tried before, or a lyrical piece right in her wheelhouse. Koine ultimately placed second on her season but to me she’ll always be the real season 14 star.

How did you get started dancing?
I actually started dancing when I was two and a half. My family and I moved from Japan to Florida when I was two. My parents wanted my brother and I to get into something that didn’t require speaking a bunch of English, because of the language barrier. That was when my mom was like, “Do you wanna dance?”

I just remember being in the living room saying “Yeah, let’s dance!” Ever since then, I have not gone a day without dancing.

When did you decide to audition for So You Think You Can Dance? Had you watched it in the past?
Yes, I’d started watching that show when I was eight years old. I remember I saw it on TV, and I was like “Yeah, when I’m old enough, I’m definitely going to be on that show.”

I just waited for years till I could audition, and then finally when I was eighteen, I was planning on auditioning, but that was the season that SYTYCD decided to change it to the kids’ version. I was like, “Oh my God!” I just remember being so crushed, and the year after, they luckily brought it back to the 18 to 30-year-olds, so that’s when I auditioned.

Did you have a particular instructor or teacher who was really influential for you?
I’ve had so many different mentors that honestly shaped me to be the kind of dancer I am today, but I would have to say one teacher, Miss Jenny Waters. She has taught me since I was six, and till the age of eighteen, she was with me every single day. So Miss Jenny Waters was definitely the one that I give most of my credit to.

What styles had you trained in before you went on the show?
I’ve trained in every style except ballroom, so I did hip-hop, contemporary, ballet, jazz – everything like that, other than ballroom.

What were some of the big challenges of doing ballroom when you first got it on the show?
Those were definitely the hardest dances of the week, when I had jive, and when I had salsa. But it also became my most favourite piece that I did on SYTYCD, just because the whole process of learning a whole new style of dance was so fun. I really enjoyed it, because I felt like it was something that I have never explored, and I have so much respect for a whole new style. So it was just really cool.

What would you say surprised you most about your experience on the show – something that you weren’t able to expect from watching it on TV?
I would say all the behind-the-scenes backstage stuff that nobody else can see on TV. I would say all the moments of the choreographers in the rehearsals that aren’t taped, and just the memories that you make there. That really was the best part about it – the bonding that we had with the all-stars, and the family, and the choreographers. Just the things that not everybody can see on TV. I didn’t know that it was gonna be so great, so that definitely shocked me, how fun it was.

Let’s talk about Marko [Germar]. What was it about you two that made that partnership work so well?
I would have to say, I believe it’s our work ethic. Marko and I really had a very similar work ethic, and we just clicked straight from the beginning. We had similar views on life and things in general that made it easier for us to work together, and when we danced, we just had a great connection with each other, so it just fell into place.

You mentioned you really loved learning the ballroom routines. What were some of your favourite routines you danced in the whole time you were on the show?
Definitely the salsa routine. I also loved the hanger routine by Mandy [Korpinen] and Elizabeth [Petrin], a contemporary number that Marko and I did. That was definitely one of my favourites. I loved the African jazz routine we did with Sean Cheesman, with Marko. I would say those three are my most memorable.

Was there a particular piece of criticism from the judges that ever really stuck with you?
Yes. Mary Murphy. I don’t remember exactly which dance, but after one of my performances, she just told me how genuine I had looked onstage, and how much she could tell that I loved to dance, and just how dancing can show so much more a person’s personality than they think they know. Just hearing her say that to me was so sweet. That made my whole day. That, for sure, was the best part.

Be honest- how much did it bother you that they kept mispronouncing your name?
[laughs] Honestly, it didn’t bug me at all, just because I’m so used to getting my name messed up every day. Not every day, but it’s just so common that it really doesn’t bug me. I honestly thought it was pretty comedic, and especially when they made a video of it at the end. I thought it was great. I loved it.

What was a style you wanted to dance more of on the show?
Hip-hop. It’s just the one genre that I didn’t really get on the show. I only got it once, and it was more like a contemporary hip-hop. But I wanted to have a lot more hip-hop pieces. I love hip-hop, and I feel that that’s something America doesn’t really know about me. So I wanted that more, but I also had Broadway once, that I would love to try again. I had a Broadway piece with Lex [Ishimoto], which was really fun, and I would have loved to have that again, too.

Who was your favourite choreographer to work with on the show?
Oh, man. I loved working with Val Chmerkovskiy, which was for the salsa. I loved working with Al Blackstone, for the Broadway. And then Stacey Tookey as well, was very, very sweet. She was a very good teacher. She was very motherly. Very mentor-like. I would say those three were definitely my favourite choreographers.

Speaking of Val, you’re going out on tour with him and Maks Chmerkovskiy and Peta Murgatroyd.
Yes! I’m currently in Nashville right now for them. [laughs]

Tell us a little bit about working with them, and what we can expect from the tour.
Oh my goodness. This tour is such a different show compared to SYTYCD, or anything like that. They’ve incorporated ballroom, they’ve incorporated contemporary, hip-hop, every style in this big story of their lives, and it’s extremely personal. It’s extremely emotional. It has all different types of elements, and it’s just purely based off of real true-life stories of the three of them. We get to interpret it, and we get to put pieces of our own life in the show. It’s an amazing, amazing show. It’s awesome, and the cast is incredible. Every dancer in the cast has done so much. It’s incredible.

Since the show, you’ve also performed at events like New Year’s Eve in Times Square, and we saw you on the Grammys. What’s your dream gig?
That’s a really hard question. I thought growing up, my biggest dream was to dance with Beyoncé. But as I get older, I start to realize that every gig is so different, and so unique in its own way.

When I booked the Grammys, I was so mind-blown. But also, when I danced for Ellen, it was another mind-blown moment. So I feel like every gig for me is something that I’m just super grateful for. And I still have a couple, like dancing with Beyoncé, or dancing for someone like Sam Smith would be a dream of mine. But everything is different. I can’t say I have one huge thing that I want to do.

Do you have any upcoming projects, or anything that you wanna plug?
I will be teaching a lot in the summer, but other than that, no. Not yet. I don’t wanna say.

Where do we find out about your teaching?
Definitely on my social media. Mostly on my Instagram. I’ll be posting things. Facebook, as well, and my Instagram is koko_iwasaki, which is my last name.

Is there anything you’d like to add?
Thank you for having this interview with me, and thank you for supporting me. The nomination is really, really awesome, so I’m just super grateful.