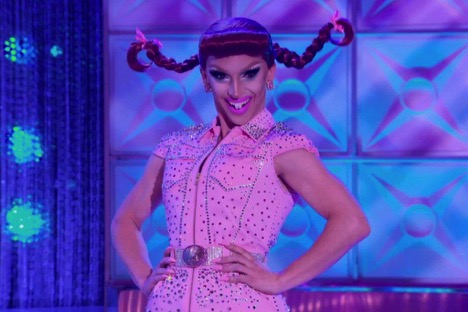 Hooray, an improv challenge! I am of the firm belief that improv comedy has very little to do with being a drag queen so these challenges are kind of silly, but RuPaul’s Drag Race is nothing if not a completely contrived vacuum where all of the conditions are dictated by one God-woman and taken as gospel, so in this Ru-niverse, improv is part of being a drag queen. Additionally, I am a self-identified improv hag which is a woman who hangs around improvisers all the time and spends a truly absurd amount of time at improv shows despite having absolutely no interest in ever participating in improv, so I’m always here for these challenges!

Before the maxi challenge, however, we have our ceremonial start of the episode whine session during which this week Asia is mad at people for not helping her even though she freely offered to help people last week and didn’t appear to need or want any help in return. How dare those other selfish queens not read her mind! I thought they were sisters! Cracker appropriately calls her out for it and we are back to business as usual with the Vixen complaining about how annoying Eureka is. The Vixen is still correct. The Vixen wins the homonationalism military themed mini challenge by defending resting bitch faces as well as wide awake bitch faces, which is finally an appropriate diagnosis for me. As her prize, she gets to pick the pairs for the maxi challenge, which will be an improvised Maury-style talk show with Bossy Rossy, AKA Ross Matthews, AKA the runner-up of Big Brother: Celebrity Edition. The Vixen picks Asia and they are assigned “Why you so obsessed with me?” for their scene. Blair and Monique will be performing “I married a cactus,” Monet and Kameron will tackle “my strange addiction,” Cracker and Mayhem will work on a deadly fear of pickles, and Eureka and Aquaria will bawl “Look at me, I’m a sexy baby.” Obviously pairing Eureka and Aquaria was Vixen’s attempt at throwing shade, since neither of them get along with her or particularly with each other, and the Vixen thinks that since they both constantly need to be the center of attention they will not allow each other to speak during the scene.

While working together, Asia articulates to us that the Vixen sometimes gets extremely salty and difficult when things don’t go her way, which is very rich coming from someone who five minutes ago was whining that no one helped her enough in the last challenge. The Vixen comes up with the idea to make the backstory of their obsession scene based on the Miz Cracker/Aquaria New York feud, where one will incessantly copy the other. In the actual scene, however, very little of this comes through. They make very few specific references to the girls they are imitating, which is perhaps for the best because with how flat the scene fell, it probably would have come off as less shady and more just plain mean without the humor. The Vixen blames the failure on Asia not responding to her in the scene and not following through on some of what they had rehearsed, but at the end of the day, even if she wasn’t the best teammate, Asia was funnier and had a better, more comfortable atmosphere than the Vixen, so at least she brought some liveliness to the scene where the Vixen didn’t.

Comedy queen Monet is worried about Kameron being too shy, which is certainly a reasonable concern considering that we haven’t seen Kameron on the show at all. However, just to touch on this week’s Untucked a little bit, Kameron did make some iffy comments about her racial preferences in terms of dating, saying that she prefers black and brown men because they have a “swagger” that white men don’t, which, coming from a white person, feels a little fetishizing and icky, so I can’t complain about her not being on the show too much. As for her performance, however, she far outshone Monet, which makes me feel really bad for Monet here, who is just trying to get it right and swings and misses under the pressure, even in her own element.

Miz Cracker has a glimmer in her eye as soon as she spots the pickle suit hanging on the rack, and comes up with the character of Dr. Dill, a picklephobia specialist who also happens to be an actual pickle. A Jewish pickle, to be exact. While the judges ate up Dr. Dill like the savory Kosher treat she is, I wish that she had played it a little more Jewish and went a little bigger with the character. The dialogue was smart though, and as Cracker herself says, there’s nothing she can do like stupid. I actually didn’t think that Mayhem got as lost in this scene as the judges did. The narrative of Mayhem not having much of a personality is annoying to me, because I do find that she has a sparkle, and she did her best to make this scene work with Cracker as clearly the more dominant character. Improv is as much about giving as it is about taking, people! Mayhem was an energetic, reliable scene partner, let her live!

Blair and Monique come up with a safe word, which of course is “Vanjie,” prior to their scene so that Blair can let Monique know if she feels like she’s being overshadowed. The problem with this format is that it isn’t actually improv if you know exactly what the scene is going to be and you can plan out things in advance. “Rehearsal” for improv usually means just doing more improv to improve your skills, not actually planning things out in advance. I somehow don’t think that Ru cares about the technicalities of improv, however, so the scene worked out just fine for the both of them.

Everyone is completely wowed by Eureka and Aquaria’s scene which is fine but the easiest of all of them. They were the only ones who were given actual characters. “Sexy baby,” is a specific character with particular traits and behaviors that they did not have to come up with. The other scenes, like a strange addiction or being obsessed with someone, requires a great deal more work in coming up with that character, so forgive me if I’m less than impressed by Eureka not wearing any drag and rolling around on the floor screaming. How inspired! She ends up winning the whole challenge and I’m bored with it.

Something I’m not bored with, however, is the runway category of denim and diamonds, which is so fun and gives the queens the opportunity to really set themselves apart and not look like everyone else in rhinestones and jeans. We are not going to talk about Shania Twain guest judging with the world’s worst possible timing given her recent media headlines, and instead will go straight to the queens. Cracker does pink the right way in a full Joanne-era-Lady-Gaga-approved denim jumpsuit, complete with buck teeth to top off the country look. Mayhem, however, does pink the wrong way in a hot pink line dancing ensemble that is cute but doesn’t even look like denim, though she assures the judges it is. This combined with her apparently lackluster performance in the challenge lands her in the bottom two for the second time. Kameron looks pretty but unoriginal, looking just like Britney with Justin Timberlake in their iconic ensembles at the 2001 American Music Awards. The Vixen does the floor-length dress better, looking not entirely distinct from the other queens when they’re all lined up, but absolutely stunning nonetheless. Asia looks pretty despite her fringe, and Monet looks like she’s wearing parachute pants which will be enough for her to get read for filth by the judges for her ill-fitting garment, particularly coming off of an underwhelming challenge performance. Blair continues to bore me; it’s hard to be impressed by her garments when she’s barely wearing any, and the ones she is wearing could be put together at a Forever 21 sale rack. Speaking of, I’m also bored by Aquaria’s minimalism, and the judges gagging over it just because she has a perfect body. Monique’s reveal is lovely, though the second look has nothing to do with denim or diamonds so I’m not sure why she chose to do this here. Her explanation is that she thought the giraffe print was a brown cow print so it would go with the denim cowgirl theme, which, even given the brown cow confusion, still makes no damn sense since the runway theme wasn’t “Denim and diamonds OR outfits inspired by things that might be associated with denim but don’t actually involve denim.”

It winds up being Mayhem vs. Monet in the lip sync which is a real bummer because you can see how badly both of them want it, and I truly believe they both have more to offer than, say, Kameron who, even in her best moments, has failed to prove anything truly special. Monet solidifies her place as a lip sync assassin and comes out with the win, due to the help of a few props and a genuine stage presence that proves why she’s such a big deal back in New York. Mayhem seems so sweet and is a real potential contender for Miss Congeniality. Even in her final episode on the show she spent time trying to make nice between Eureka and the Vixen, just wanting to keep the peace between these sisters. The conversation was uncomfortable, with Eureka unfairly comparing the Vixen’s behavior toward her to the abuse and bullying she suffered growing up, but they both come out with a little more tranquility and understanding of one another, all thanks to Mayhem, a fitting tribute to the kind of queen she was and is as she exits the runway.