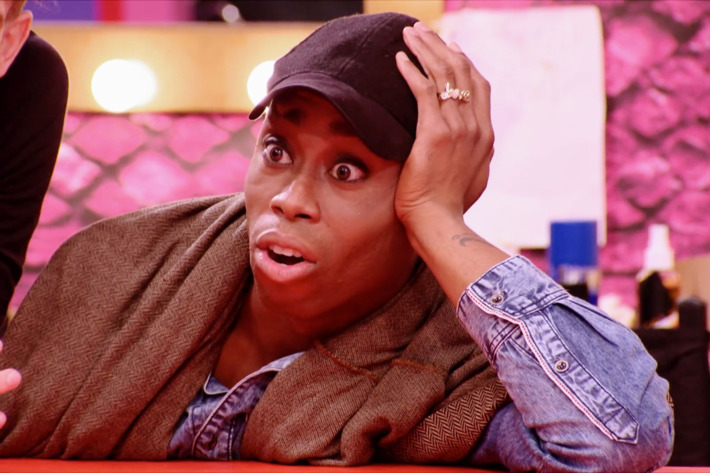 This episode starts with some residual tension between Mayhem and Monique, after Mayhem called Monique out for not being a good team leader in the last episode, which ultimately lead to Mayhem being in the bottom. I’m not really interested in Mayhem assigning any blame for her loss, nor do I find it particularly compelling drama when this just kind of seems like two queens who are sad about how things went down. I’m glad we move on from this quickly to the mini challenge, which consists of crafting a photobomb photo in which they insert themselves into a the background of a celebrity photo. Aquaria wins, which is an omen for things to come in this episode, and also indicative of her uncanny ability to ruin things, like photos or other people’s enjoyment of RuPaul’s Drag Race episodes.

For the maxi challenge, we are already jumping, well, balls deep into a ball. Right off the bad it feels early for such an ambitious challenge, not because I think Ru should go easy on these queens, but mostly because 11 people is too many people for three looks each. With 33 total outfits, even the biggest Moments are bound to be somewhat lost in the crowd. The three global-warming-induced-apocalypse-inspired categories for The Last Ball on Earth are: Alaskan winter realness, featuring bikinis and tons of skin for those hot Alaskan winters at near the end of times; Miami summer, in which queens will have to keep warm in the nuclear winter of south Florida; and Martian eleganza, for when the girls are forced to evacuate the earth and find new life in space.

It’s nice to see a purely individual challenge here. After two weeks of the queens struggling with one another between the team challenges and Untucked, we get a glimpse of what it looks like for the contestants to struggle with themselves. For Miz Cracker, this manifests itself in a fear of not being taken seriously, or not feeling respected for what she has earned. While she will later quip that unlike Aquaria, she would love to have a sugar daddy, she makes it clear in confessional that hard work has always been a foundation of her life and her drag. She relates a story about how, after winning a karate championship as a child, her father instructed her that she has to do it again so that people don’t think it was a mistake. Though Cracker did well in the last design challenge, she feels that if she fails to repeat it, it will not only mark a failure in this challenge, but will undermine the previous success as simply a fluke. This is an enormous amount of pressure on herself, and I honestly worry that for such a silly, over-the-top person in her real life, Cracker is not actually having fun in this competition. That’s okay, since taking the show seriously as both a competition and a launching pad for her career isn’t exactly wrong, it just seems not in the spirit of the show to barely crack a smile while working. I hope that Cracker can come to embrace the experience a little bit more so we can see a little more of her unmatched wit off the runway as well as on.

Dusty Ray Bottoms’ struggle with herself is more physical: She keeps injuring herself on her materials. Making an incredibly uncomfortable outfit doesn’t necessarily mean that the outfit is not going to be great – as a wise woman once said, “Don’t be afraid of a hot glue gun, bitch, you a drag queen” – but it does increase the odds of it looking homemade and arts & craftsy. Blair St. Clair knows her drag herstory and points out in confessional that all of this work and pain may not have a payoff for Dusty, since it’s common knowledge that the judges are not here for coming out in a corset and panties.

Meanwhile, Asia earns a reputation as the season mom, and the black Martha Stewart. She is helping everyone out with their costumes, all while constructing the best crossover-character outfit inspiration ever: Judy Jetson meets Effie Trinket. While Ru is making her rounds, she asks Asia about her family lineage, to which Asia clarifies she is not related to Eureka, but she still hasn’t answered my burning question which is whether or not she’s related to Phi Phi and just doesn’t want to tell anyone she is, which is exactly how you should behave if you are in the unfortunate situation of being related to Phi Phi. We learn that Asia’s role as a mother is no accident, as she lost both of her parents when she was 27, and knows what it’s like to feel truly alone and un-nurtured. Once she ultimately lands almost in the bottom after sacrificing her own polish in order to help others, this story rings even more heartbreaking. Rather than being disappointed in Asia’s performance, Ru comes off as motivating and compassionate, imploring her to put herself before others, despite how her background has informed her nurturing instincts.

On a lighter note, when Ru talks to Aquaria, she can’t even manage to repeat a good line for the cameras. Aquaria is very good at what she does but no one ever claimed she was the brains of this season, especially given that her opening tagline was “I don’t define drag, drag is defined by me,” which names no kind of sense. When talking to Vixen, she reiterates how influential she is in the Chicago drag scene, given her outspoken attitude and her unabashedly political drag, and she does indeed walk the walk. She speaks to the cameras about producing a Black Girl Magic drag show in Chicago, which is exactly the kind of thing that the next drag superstar should be doing: Lifting up other queens who may not have as much of a platform and driving drag to be more inclusive and progressive than other contemporary art forms. I stan forever.

Monet is urged to wear bigger hair, even though she likes to stick with what she knows, which is little wigs and lots of sponges. Much more interesting than Monet’s hair discussion is Monet attempting to explain to everyone that people with British accents used to sound like us, and then after the American Revolution they developed the accent to distinguish themselves from US English speakers. The thing is, Monet is actually correct! She just does a terrible job of explaining it that makes her look like an idiot, but it is so fun and I’m glad they kept this entire segment in. The only other real mirror drama besides heated accent debates is Cracker asking Aquaria to respond to accusations around New York that she has sugar daddies. Aquaria is hurt by this rumor, which is valid on the grounds that it undermines the hard work that she herself has put in, though I wish she could take down the level of disgust a little bit, given that it shouldn’t be so stigmatized to have sugar daddies, which Cracker attempts to make clear by saying that she would be happy to have one.

None of these runway looks matter because they are all immediately slayed by guest judge Logan Browning, star of the Netflix series Dear White People, who serves the best judging panel look I have ever seen and I hope that this is the year she becomes a full-blown celeb. Other than that, my favorite looks of the night were any of the Miami summer looks that didn’t involve white fur, because they all looked the same. Specifically, Miz Cracker’s pretty in pink look with the most to-die-for pink fluffy stiletto boots completely wowed me. All of the Vixen’s looks stood out, and it’s wild to me that she’s not in the top. Beyond that, she’s not in the top in favor of Kameron Michaels, who served a series of over-accessorized messes with an orangey-pink skin tone that the judges somehow enjoyed in this bizarre apocalyptic universe we have been plunged into where apparently the rules of fashion have all changed. They also love Aquaria, who ends up winning the challenge by gluing stuff to her body in a fashion that any other queen who didn’t have a perfect figure would be read for filth for for relying on her body, but that’s the last of my Aquaria digs for this recap.

The Dusty lands in the bottoms, along with Monet and Asia. She will ultimately lip sync against Monet, which already is an incredibly uneven match up, and when it’s revealed that the song is legendary bop Pound the Alarm by Nicki Minaj, it’s over before it begins. Monet puts on an absolute clinic in lip-syncing, backing up a Miz Cracker confessional from earlier detailing how Monet’s popularity is predominantly reliant on her personality and talent rather than her looks. Ru acknowledges this, telling all the other girls that that is how you lip sync for your life. Dusty attempts to blame her elimination on the fact that she’s a punk rocker and she doesn’t “do” Nicki Minaj, and while I love Dusty and am glad that we got to see as much of her as we did, it was time for this sweet girl to go.

One last note: It unfolds mostly in Untucked, but a big story brewing is Eureka vs. The Vixen, in which Eureka is a complete mean girl to The Vixen but then plays the victim and says that the Vixen has never been nice to her, and throws around the word “negative” a lot. When a white queen accuses a black queen of being mean to her “for no reason,” and calls her “negative,” then acts like she can’t have possibly done anything wrong to provoke the situation, that gets a big old “girl bye,” from me. I have no idea what Eureka’s damage is, but she started this feud and then acted like it’s all the Vixen’s fault and Eureka was just trying to be nice to everyone and wishes they could all get along like they did in middle school. Boo hoo, girl. Get a thicker skin or leave queens with actual nerve alone.