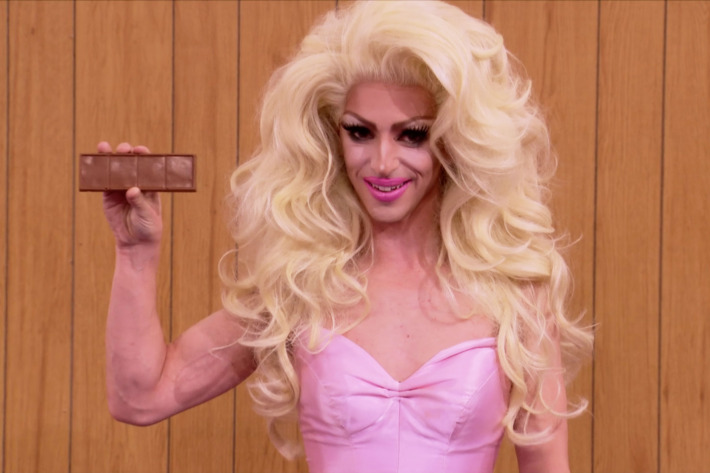 This week, the coronation of the Vixen as one of the greatest pieces of casting in recent Drag Race herstory continues, and I am so thrilled. The Vixen takes visible pleasure in calling out queens (specifically, so far, Aquaria) for their hypocrisy, shadiness, and even potential racial bias, which she touches on briefly in Untucked. The reason that this comes across as so satisfying and not uncomfortable in the way that this kind of attack could come off is because of the undeniable truth that the Vixen is right. Aquaria is picking fights that don’t matter, and coming for the Vixen in a way that seems completely unnecessary. She can be indignant all she wants about the “unfairness” of the Vixen winning a best drag runway with a wig that doesn’t belong to her, but it won’t change anything, and ultimately it doesn’t matter at all. It reads as a little boy who’s mad that she didn’t win a game so instead of accepting it she says that the other person cheated or that the rules of the game are stupid or unfair. In short, she comes off like a brat, and in this industry, you will not make it behaving like that. Some might think the Vixen went too hard on her, but in the long run this is going to be a good lesson for Aquaria to suck it up and be humble or get out of this business, or at least learn to let the little things go. A white queen having it out so specifically for a black queen for such minutiae in the grand scheme of this competition seems fishy, or is at the very least a coincidental bad look. Additionally, the other queens seem to support the Vixen, or at least the show is presenting it that way, because she has said from the beginning that she will not back away from a challenge when she feels she is being shaded, and so far her responses have been, if harsh, at least in the right moral ground. I’m so relieved the show is not making her out to be the villain, it would have been too easy, too predictable, too icky.

Anyway, to the mini challenge, which is extremely bizarre and far too long. The concept is a chocolate bar commercial audition directed by Ru which reads as a porn audition, and I found it weird and uncomfortable. At the conclusion of what felt like 45 minutes, we wind up with Blair St. Clair, Monique Heart, and Monet X Change as the team captain to shoot group commercials for made up dating apps. It’s nice to see Monique get some recognition here, though I can’t help but feel a little bored by her constant whining that she’s not in the top. I say bored and not annoyed because I actually do believe she has the talents to be in the top and she’s not wrong in that she’s unfairly been pushed to the back a bit this season, but I do think it’s never a great look to complain about seeing safe. The main points of conflict during the production of this challenge include the Vixen being driven crazy by Eureka, Mayhem losing the role she wanted to Kameron because she didn’t speak up, and Monet feeling she’s being overshadowed by Asia’s incredible ugly face in the background of their Butterface app commercial.

In the workroom, we have our usual heartbreaking story hour, which I feel like we missed out on on All Stars 3 since we already knew so much about those queens’ backgrounds. In a monologue that made my mom and me simultaneously burst into tears, Dusty Ray Bottoms talks about her hellish coming out experience and trials through conversion therapy and intense religiously-oriented attempts at rehabilitation until one day she packed her car and left. Seeing the photos of her, so handsome, so healthy, with her current fiancee, living her best self, has really cemented a place for Dusty in my heart. I still think she has a long way to go in terms of drag and don’t believe she’s long for this competition, but she’s so adorable and sweet and deserves the world. Blair, meanwhile, misses her mom and talks about the other possible reality of growing up in a conservative Christian family, but having parents that love and support her as a gay man and as a drag queen. Something that’s often overlooked in the queer community if you aren’t part of it is how generational differences exist literally within a year. The cultural gap between coming out in, say, 2005 and 2010 are massive. Even in Obama’s first presidential campaign it was too controversial for him to say he supported gay marriage, and RuPaul’s Drag Race was on a little show called Logo where I would, embarrassed, flip the channel when my family walked by, instead of on a basic cable channel at primetime on Thursdays, where many gather to watch with their families. The disparities of micro-age gaps come to light in straight society as well, whether or not someone had a MySpace account can be determined by a matter of months, but in the gay community this differences often determine the extent of one’s self-worth, the experiences and acceptances they had in their school and family lives, and, in many cases, the actual legal rights they possessed. This will continue to shift and change, and though of course age is not the only factor in determining one’s coming out reception, I hope that Drag Race continues to be an exchange of ideas between gay “generations,” even if those generations are only comprised of a few years, like we’re seeing with Blair and Dusty.

In a more fun exchange, this is also where the Vixen completely comes for Aquaria’s wig, which is saved by the grace of a spider that freaks everyone out and brings the conversation to a grinding halt, as they all shriek as macho man Kameron Michaels puts it in a cup and takes it away, making him even hotter to me which I thought was impossible. It figures that spiders, the most evil creatures that walk this planet, would be #TeamAquaria.

It’s all feathers on the runway this week, which is all very spooky and dramatic which I’m into but I also can’t help but hope these aren’t real feathers, especially the Vixen’s (amazing) peacock dress. I literally gasped when Monique came out in her gold and white Beauty-School-Dropout-Teen-Angel-But-As-A-Woman fantasy. They love Eureka’s dark look but to me hers, Kameron’s, and Yuhua’s all sort of run together, plus Eureka looks like she’s wearing the same hair as Miz Cracker’s spherical realness two weeks ago. Speaking of, Aquaria and Miz Cracker actually look kind of different this week, and both good! Aquaria doesn’t really perform the hell out of her wounded bird look but her makeup is so pretty. Dusty’s showgirl look is nice but I hate her makeup. The back of Mayhem’s dress looks unfinished but she’s wearing the absolute best shade of pink I’ve ever seen and it’s frankly BS that she lands in the bottom. Monet has absolutely no shape in her Gatsby look and it’s a miracle she’s safe and doesn’t get read for this. Asia is wearing a giant rendering of Tweety Bird and as a classic cartoons addict and lover of completely ridiculous drag fashion I’m obsessed with it and so happy she wins here. She is in the top with Eureka, who I guess the judges really wanted to give redemption to after last week’s total failure, as well as Blair whose dress looks pretty but not super fitted, and to me didn’t really stand out in the challenge but sure. Asia, of course, wins the whole thing between her iconic runway and her unforgettable ugliness in the challenge.

Yuhua, who cannot act and got completely lost in the challenge, and Mayhem, who just simply did not have enough to do, land in the bottom, even though it 100% should have been Kameron instead of Mayhem. Yuhua deserves it, though I am super irritated at heartthrob of TV Land’s amazing show Younger and real-life total weirdo Nico Tortorella’s comment from the judging panel that Yuhua’s crow look, which was tied to the symbolization of crows in Asia as omens of death, didn’t make sense and had nothing to do with the look. It read as extremely disrespectful and someone who knows nothing about drag just trying to contribute something to the conversation, and it was gross.

Anyway, Yuhua and Mayhem lip sync to a Courtney Love song because she is also there and more coherent than I would have expected, re: at all, and you know the second Yuhua busts out the air guitar that she doesn’t have a prayer. I won’t really miss her, starting off the season mixing up the black queens and laughing it off as a silly mistake without apologizing was not an excellent first impression, though she was fun while we had her and I know from social media picked up a few stans along the way. See you next week for more mischief, Mayhem, and hopefully no more spiders.