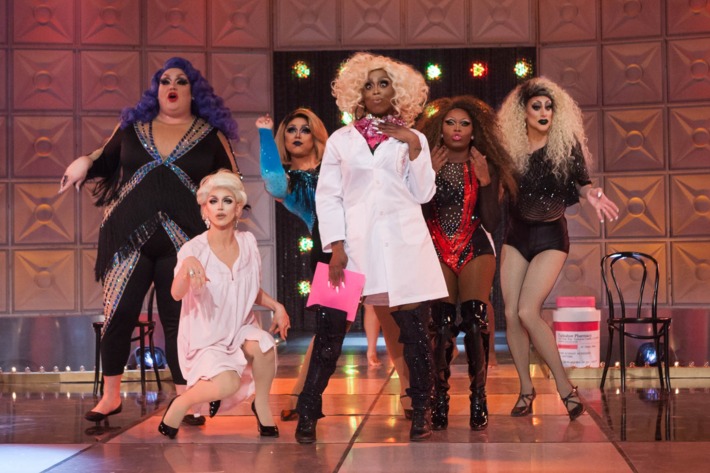 Episode 2 of season 10 was all about pharmaceuticals, but the only ailment I’m suffering from is Vixen fever and thank God there is no cure! The Vixen did not come to play this episode, stoking the flames of the Aquaria/Cracker drama without letting anyone get away with downplaying the drama from last week’s Untucked. But the Vixen is more than just a drama-starter. She backs up her pot-stirring with a double win in the mini and maxi challenges, captaining a team to victory and serving a literally fire runway look. Bitch she’s from Chicago, and I am so here for her.

Professional Milk Toast Gay and loved one of Brandi Glanville Andy Cohen arrives on the scene to implement a hoedown mini challenge which in won by Asia O’Hara in addition to the aforementioned Vixen domination. As a reward, the two get to pick their teams for the maxi challenge, PharmaRusical the musical. Eureka is the last picked because, despite her experience, the queens find her a little annoying. I relate to this because Eureka is unbearably grating in confessional and on the show in general. While the other queens cite her talkativity as her biggest flaw, I just can’t get over the whininess. She’s anxious, she’s hurt, she has PTSD from her injury, she’s sad about her family, she’s under too much pressure, she’s not being heard, it’s always something with Eureka and it’s not a winning attitude. On top of that, she doesn’t balance it out by delivering in the challenge or really on the runway. If you’re going to spend all day being a negative nancy and making bad TV, at least show us why you deserve to stay!

It’s set up to be a blowout for Asia’s team, who comes to their choreo session prepared and focused, which of course means that they will ultimately wind up losing. Because season 10 is truly blessed, Alyssa Edwards is here to choreograph and direct this lip sync extravaganza. Alyssa is the perfect person for the job because while she wasn’t known for being a stand out in the acting or comedy challenges, all this requires in terms of direction is for her to constantly shout “GO BIGGER!” at every single queen no matter how exaggerated they already are, a job Alyssa was built for. She does not go easy on the girls, who are right to be afraid of her. By all accounts that I’ve heard, Alyssa is an intense teacher and studio owner and doesn’t go easy on her girls in Texas, so she’s certainly not going to go easy on these girls who are about 3 feet taller and 15 years older than the girls Alyssa is used to working with… except maybe Aquaria. Kalorie seems to be struggling the most and is feeling overwhelmed, and though I don’t really care for Kalorie, I almost had to start stanning when she said that Jujube is her icon that helped her feel confident with herself and inspired her to pursue drag, because Juju is also my first-ever drag race fave and an excellent choice for a role model.

This whole concept is so bizarre, but in the final result both teams more or less pull it out, with the biggest issue being Eureka completely losing her words. One would think that being so scared to death about messing up and not living up to her expectations would push Eureka to be as prepared as possible, since words are something that you can and should drill until you know you’ll be flawless. I feel for her that she’s been talked over and deemed not a dancer by the other queens even though she considers herself one, but there’s absolutely no excuse for messing up a lip sync in an explicitly lip sync challenge. She predictably lands in the bottom two with Kalorie, and it appears our dreams of having a qualified big queen to finally take the crown will be dashed for another season.

On the runway, the category is Best Drag, and boy are there a lot of basic catsuits prowling around. Though Padma Lakshmi enjoys Eureka’s and think it’s the best of the bodysuits, the color changing fabric is doing nothing for me and just makes it appear torn or distressed in random places. Kalorie’s is so forgettable and is paired with black heels that I wore to my office job every day when I worked at the US government. STEP IT UP, GIRL. It won’t matter, but Monet’s catsuit is also nothing special and if this is all of their best drag I’m worried about what we’ll see from them in the future because some of these queens’ best is truly boring.

Asia looks pretty in pink and Aquaria looks like Maleficent, both looks that I am very into. As much as I tend to avoid praising Aquaria when possible, I have to be fair, and her boobless realness was giving me what I needed this time around. Mayhem’s dress is not eye-popping, but she’s serving it and she looks so glamorous in it. Blair’s dress is so ugly and barely fits her. She’s lucky she was on the winning team because for a Broadway queen she fell flat in the challenge for me and this runway look is a disaster that she manages to avoid getting read for. I predict that Blair will not last much longer in this competition. Three more weeks tops. Dusty looks like a sexy Beetlejuice, Yuhua is forgettable, and Monique serves the most iconic look of the night even without the reveal, and the reveal just perfects it. The judges are insane not to be all over this, it’s pop art Sesame Street realness and it’s everything. In a close second is Kameron, who I underestimated coming into this season but serves a rainbow fantasy that I’m obsessed with. She continues to surprise me and I hope she keeps doing what she’s doing and proving me wrong. And not just because I like to look at her shirtless. But maybe also that.

The Vixen’s team, which includes literally all of my favorites, including Cracker, Mayhem, and Monet X Change. During critiques, Yuhua demonstrates some immaturity by pushing back against criticism and making excuses for why her best drag is… not the best. She is spared however and when it’s Kalorie vs Eureka in the bottom we already know how this is going to wind up. Kalorie does look very pretty and she seems to have a lot of spunk, but no one would have felt good seeing Eureka go out 2nd after all she’s been through to get back here. Ru wouldn’t do that to her, not quite yet, though I don’t think she’s long for this world. Kalorie is out of tricks up her sleeve and with the deck stacked against her, she gracefully goes out here, having tried her best and hopefully having proved a lot to herself.

See you all next week, now excuse me as I back away slowly.