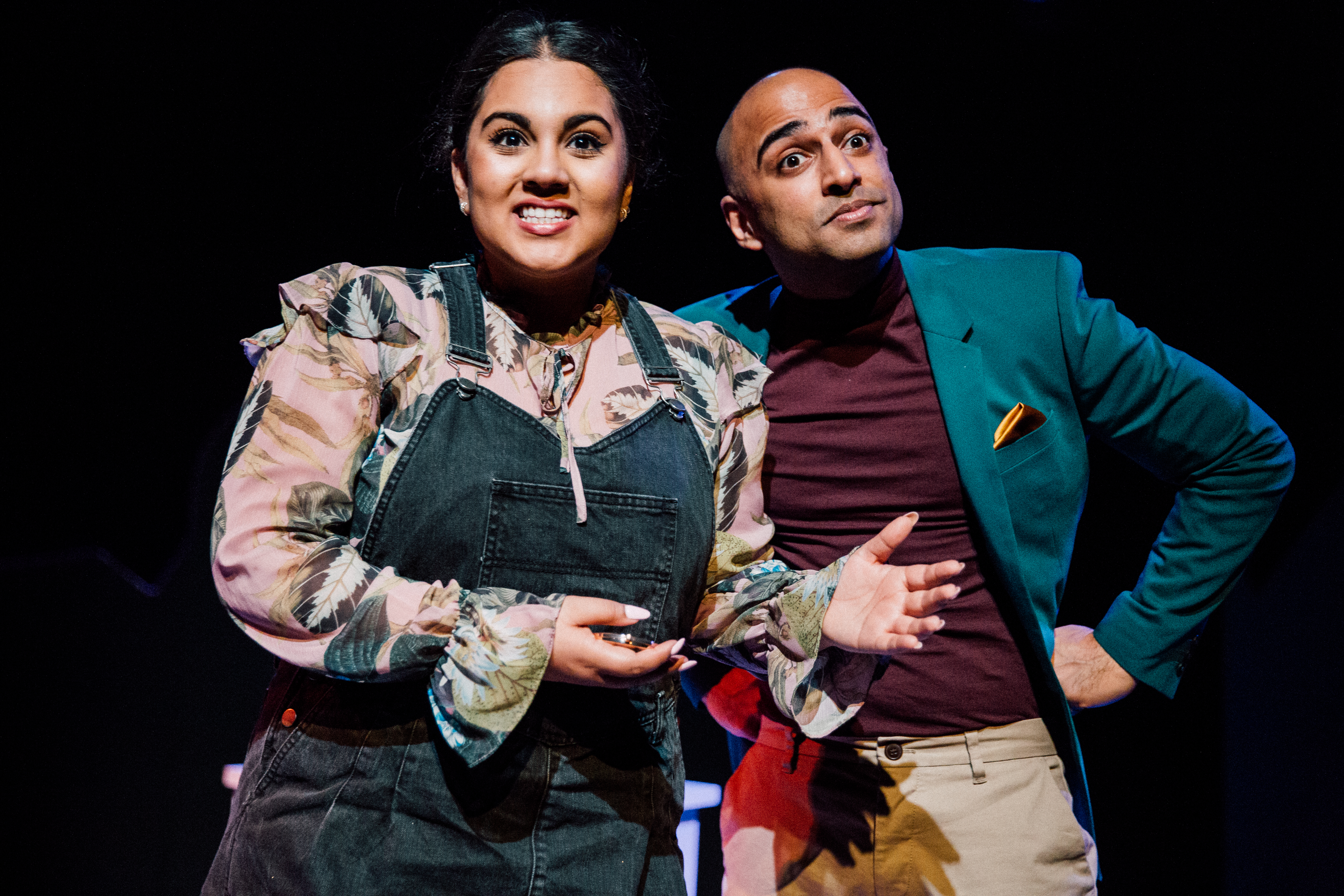 Coconut by The Thelmas and Ovalhouse

Coconut, a new dark comedy playing at the Ovalhouse, is a witty and moving portrayal of life in contemporary Britain for a British Muslim woman. Based on the real experiences of its writer, Guleraana Mir, the play explores what it’s like to navigate cultural expectations and romantic freedom, but in a very real and unpredictable way.

Rumi (Kuran Dohil) is a British Pakistani woman who meets Simon (Jimmy Carter), a white man, after a disastrous Halal dating event. They quickly hit it off, and in order to win the acceptance of her Muslim family, Simon eventually agrees to convert to Islam, leading to unexpected consequences.

With a topic like this, there is always a danger of falling into crass stereotypes, but Mir’s cleverly-sculpted dialogue feels natural and her characters have real depth. So much so, in fact, that you could easily imagine these scenes played out on screen, as the audience warms to the couple along with Rumi’s hilarious alter ego Riz (Tibu Fortes). The name ‘Coconut’ – a controversial term referring to being brown on the outside and white on the inside – hints to darker themes of control and betrayal which surface later in the play.

Making her professional debut, Kuran Dohil as Rumi is incredibly likeable. With impeccable delivery and the emotional range of an actor beyond her years – under the direction of Madelaine Moore – Dohil wins the audience over very quickly. Rumi’s bubbly personality is well-balanced by the awkward, earnest Simon, whose emotional turmoil in the second half of the play introduces a new and important dimension. Meanwhile, Fortes transitions effortlessly between the gregarious Riz and, his second part, a quietly composed Imam.

What makes the play particularly amusing is its willingness to hit awkward cultural differences head on, while avoiding the temptation to be controversial for its own sake. With Simon and Riz, Rumi is hilariously frank about the quirks of life in multicultural Britain, and they don’t hold back either.

Very occasionally there were lines that fell, whether from weaker timing or tone, and weren’t quite as slick. These were quite rare, though, especially for a new production, and fail to undermine the strong chemistry which exists between the characters.

The set (by Baska Wesolowska) and lighting (by Jennifer Rose) are suitably simple, making sure to never detract from the action but adding a few nice features, like a beautiful backdrop of stars used in a couple of scenes. Similarly, Madelaine Moore’s music keeps up the right mood between scenes while never becoming too much of a feature.

After a largely light-hearted first half, the play ultimately becomes more hard-hitting but without losing sight of the comedy. Even in the darker parts there are funny moments to provide some relief, and the balance which Coconut strikes is a good one.

The Thelmas theatre company want to tell the stories of those underrepresented in the arts, and with this production they have done their mission real justice. We all need to see more plays like Coconut.