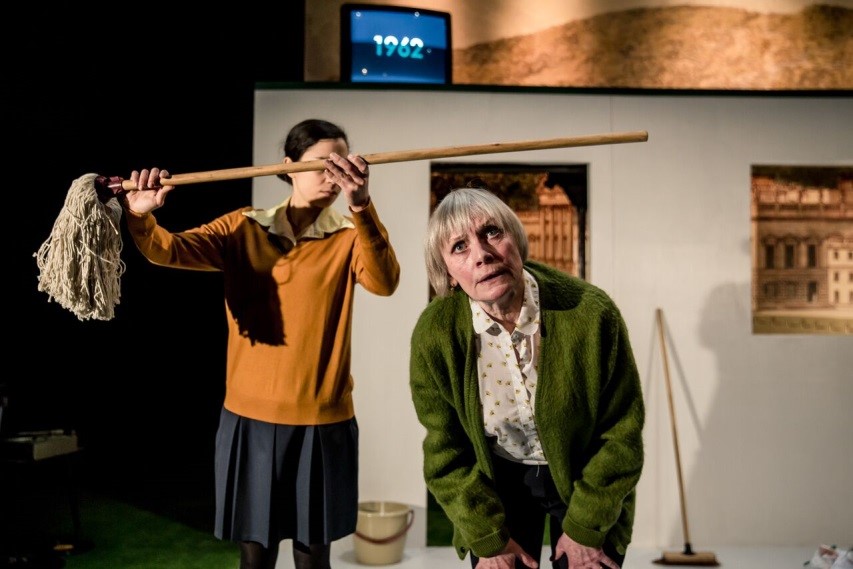 Britain’s housing crisis is an incredibly relevant premise for a play. Trap Street, a term also derived from cartographers designing fictitious maps in order to exploit plagiarists, addresses the housing crisis for the working class from the post-war period through to the current day (1967-2017). This Kandinsky production takes us on the journey of Valerie Welch (Amelda Brown) and her two children who move into the Austen Estate. It seeks to demonstrate the issues a working class family faces through financially hard times. The term Trap Street works rather well here – it conveys the sense of loss Valerie and her family feel as the streets/estates develop; the residents change, their ownership is undermined and their sense of belonging subsides. Trap Street demonstrates how streets may not be ‘real’ in a sense, but the foundations that a community builds upon make it real for the residents themselves – until their homes are shattered (quite literally).

Writers James Yeatman and Lauren Mooney seek to convey current societal issues but fail to deliver on the execution. The premise itself, whilst relevant and thought-provoking, is poorly executed jumping back and forth to various time periods throughout the already short 80 minute duration. With three characters playing not only the working class family but also adopting other roles along the way, it becomes distracting when following the overall narrative and you can’t help but end up feeling as lost as they feel when embarking on their journey. Hamish MacDougall (who plays Graham) is the strongest of the three actors; the diverse roles he adopt are both engaging and believable. This is particularly true when he takes on roles of authority, where sympathy for the family’s situation is lacking; ultimately being governed by societal rules. Amelda Brown, who plays Valerie, also adopts a strong character although you can’t help but feel a bit too drained from all the anger and frustration that she expresses throughout, perhaps a tad over dramatized.

The score, both composed and delivered by Zak Gvirtzman and played intermittently throughout, is subtle but also slightly unnerving at times. The set design, showing the outside of the Austen Estate on the back wall, depicts a thriving and wealthy residency. This is cleverly juxtaposed by its interior, using brushes as props for doors, highlighting the perhaps increasing strain on the property and the people’s lives within it. Eventually one door falls down denoting this idea of collapse; perhaps expressing the fragility of social institutions. Using VR, the production attempts to show the contrast of the utopian/dystopian nature of housing from post-war period until 21st century, but fails to achieve a full sense of what the Welsh family and perhaps residents in real life really look for in a home.

Ultimately Trap Street has a lot of potential in addressing something that most Londoners may in empathise with, for example unaffordable housing, and raises some issues that are relevant and also engaging for its audiences. However, it fails to clearly execute these issues and the narrative almost becomes subject to falling in to its very own ‘trap’.