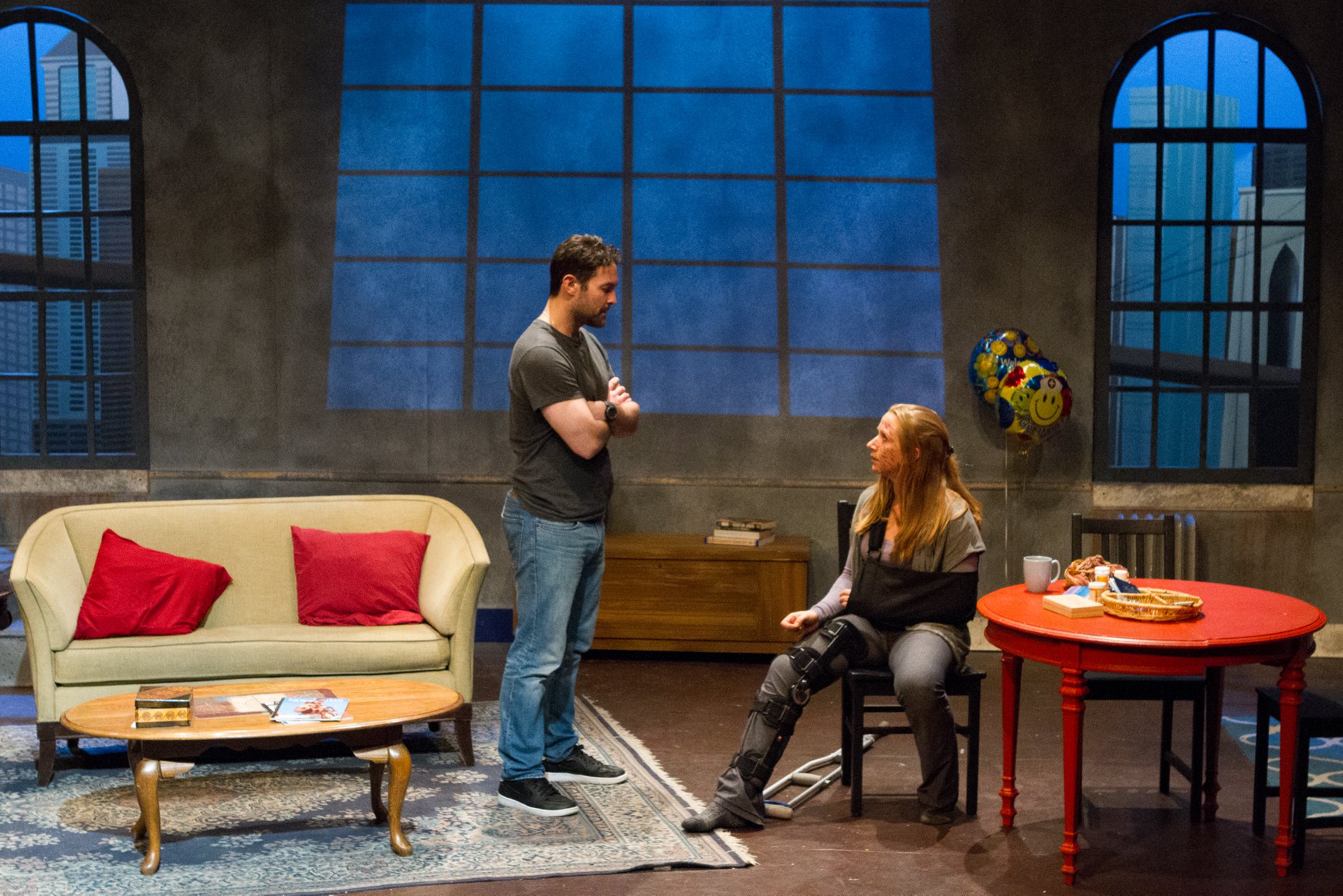 Four-person plays with two couples typically include a few familiar elements: Jealousy. An affair. Unspoken conflict. A past relationship between characters no longer romantically involved. And of course, there’s usually a catalyst that brings all the issues to the surface.  But what makes Donald Margulies’s masterful Time Stands Still so unique is that, while it incorporates all the necessary dramatic elements, the play never relies on them to tell the story. In doing so, the play avoids many clichéd tropes. The top-notch acting and chemistry between the actors also brings to life the underlying demons the characters face. And while the play occasionally meanders, it is ultimately a treat to watch as characters come to life as we learn more with each ensuing scene.

Time Stands Still, written by Mr. Margulies (Pulitzer Prize-winning playwright for Dinner With Friends) originally premiered on Broadway in 2010 and was nominated for two Tony awards. The play is in good hands under the direction of Joan Kane where the play is showing at the Theatre for the New City.

The play begins when Sarah (Maggie Alexander), a war photographer, returns from Syria to recover from injuries she sustained from a roadside bomb. She returns scarred, both literally and figuratively. She limps back to the Brooklyn apartment she shares with her longtime boyfriend and war journalist, James (Timothy Weinert). He left Syria a few weeks before the bombing that injured Sarah, but returned to Syria to bring her back.

Sarah is more comfortable in the war torn streets of Damascus than a Brooklyn loft. Maggie Alexander has really tapped into this character, maintaining a rough edge in her portrayal of Sarah, while continuing to provide glimpses of her doubts about her romantic life and her career. As Sarah adjusts to a life absent the adrenaline and ever-present danger of a war zone she had clearly become accustomed to, while trying to get back on her feet both physically and professionally, her relationship with James grows strained. The acting of Ms. Alexander and Mr. Weinert is so poignant, that even inside a calm Brooklyn apartment, the struggles each faced abroad in Syria covering a war are blatantly apparent. They don’t simply recite what happened to them, but carry the trauma with them in the dialogue and in their mannerisms.  The reactive facial expressions and body language of both actors foreshadow how they feel about their roles as journalists and what that ultimately means about their relationship with each other.

The drama is further heightened when Sarah is visited by her photo-editor and old friend Richard (Malcolm Stephenson) who has recently begun dating a much younger woman, Mandy (Connie Castanzo). At first blush, Sarah and Mandy could not be more different. Sarah is the battle-scarred expert in her field, strong-willed and often reserved. Mandy is a twenty-something event planner whose naiveté and openness (or tactlessness) in sharing most of her passing thoughts creates a number of awkward and humorous moments.

Thankfully, the play avoids falling into the trap of pitting the younger, lighter girl against the older, serious woman. Rather than setting up the conflict directly between these women, Sarah delivers her critiques of Richard’s mid-life crisis girlfriend when Mandy is out of earshot (“There’s young,” she chastises, “and then there’s embryonic.”).

And, indeed, it is the unassuming Mandy’s non-cynical and “embryonic” opinions that act as the catalyst that propels much of the remainder of the play forward. In a memorable scene, Mandy questions Sarah’s photographing of a dying boy. Why didn’t she help instead of standing by and photographing the tragedy? While the “adults” in the room initially dismiss her question as an innocent but misguided query, Mandy effectively pushes the line in inquiry to a point where the other characters and the audience are also forced to reconcile the role of those reporting on the front lines.

This theme is continued when later James lambasts an anti-war play they all attended. What was its purpose, he wonders? Was it simply a way to “assuage liberal guilt”?  Through James, the play confronts the audience, asking them to question the role that we each play stateside in how we should be covering atrocities. And, ultimately, the audience and characters in the play are forced to reconcile whether photographing atrocities serves the victims at all.

In confronting these questions, the two main protagonists come to find they approach these questions very differently. Sarah pushes for a full recovery as soon as possible so that she can return to the field and continue photographing. James is racked with guilt about leaving Syria early. He no longer seems capable of returning to a war zone – both after facing the atrocities of war, and also after becoming somewhat cynical about how much good, if any, can even be done. But the play does not try to force a right answer on us.  Instead of portraying Sarah as a do-gooder or reducing Mandy to a vapid character, we see gradations and difficult choices along with complicated motives behind these decisions.  The acting skills of the cast help to provide the nuance necessary to explore the full spectrum of these motives.

Time Stands Still is a gripping tale, which tackles big issues but is grounded by addressing many of these big issues in the context of a couple trying to deal with questions that are present in almost every relationship and in each of our decisions about how to interact with one another, the news and the state of the world. There are no easy answers. But one thing is certain, seeing this play is worthy of your time.