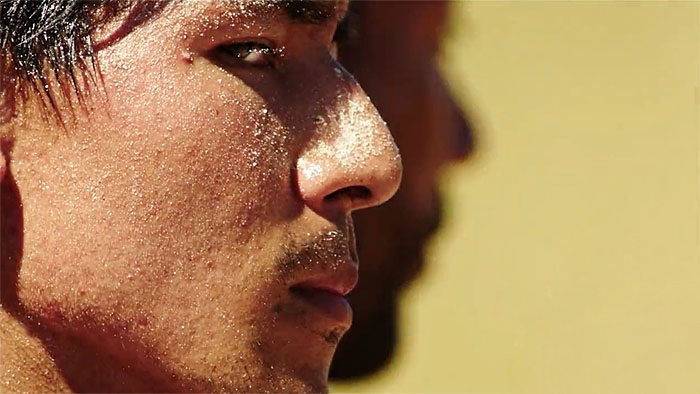 Welcome back to Survivor: Ghost Island, minus the Ghost Island this week. The Angkor Memorial Swap Into Three Tribes twist is here and it’s time to shake things up, by which I mean keep things exactly the same by maintaining a 3-2 Naviti majority on all three tribes. Exciting! It is truly telling that in lieu of potential storylines about many of the interesting characters that we haven’t seen too much from yet, or even dedicating time to the actual events at hand, we are still subjected to the tiresome and pointless feud between Chris and Domenick. Every single episode we have these two alphas trash talking each other and getting other people’s perspectives on their rivalry, and they’ve never even been to Tribal Council together. This narrative better have one hell of a payoff for me to waste my time watching the editors prioritize a nothing storyline just because there are two alpha males going at it and production thinks we will like them as characters as much as they like themselves. I understand that we’re not supposed to like Chris – he does get the dodo clown music behind him while he’s talking about being a model and we’re supposed to laugh at him saying that he doesn’t like to tell people he’s a model because they might get the crazy idea that he’s self-absorbed. He comes out to Laurel as a model and talks about how charismatic he is and it’s all supposed to be very amusing but I just can’t bring myself to care. Laughing at an arrogant dude is fine but not when it’s at the expense of exploring so many of the diverse and intriguing characters whose confessionals and conversations are left on the cutting room floor so that we can gawk at Chris Noble. It’s a no from me.

Domenick also spends this episode conspiring against Libby, calling her “the devil in an angel’s body” and comparing her to Parvati, which is an insane amount of credit for a girl who has literally done nothing this entire season.

Speaking of relationships that really don’t matter to me, literal cartoon character Sebastian is now best friends forever with Wendell because he brought him a shell from their old beach. Sebastian also pronounces “conch” like “conk,” which made me wonder if there’s some sort of elusive Florida accent that I don’t know about or if I’ve been wrong this whole time and no one has corrected me. Likely, Sebastian is just a moron.

The newest iteration of Malolo is by far my favorite tribe because Kellyn, Desiree, and James are all on it, so of course that means they are going to go to tribal council and one of them is going to get voted out. On this tribe, James attempts to make inroads with Angela who could be a swing vote since Dom did try to vote her out, which concerns Kellyn. Desiree too is worried about her flipping over to join Michael and James because she plays somewhat emotionally. As we know, Angela thinks of her Survivor experience as akin to her army days, where she relied on those around her as family members. Angela herself tells us that in her own life she often feels very alone, so having those around her that she can truly trust and make her feel wanted is important to her. James does his best to put in the work and there was a brief moment where I thought maybe Angela’s need for inclusion would drive her to work with him, but unfortunately I think her propensity for loyalty outweighed her desire to be cared for, and James paid the price.

Because this was an episode that was created to annoy me as much as possible, the immunity challenge is a blindfold challenge which are not fun to watch and lead to a lot of personal injury. My favorite tribe loses and right when I need it most, we have decided to entirely skip Ghost Island with no explanation this episode. We return to camp and I’m very nervous for my husband James and confused about why it seems to be between him and Des and not between him and Michael. It appears as though Kellyn and Des just decided on him without weighing the pros and cons of him vs. Michael. I wonder if they’re still scared that because Michael had one idol he might pull out another one. I maintain that I have no reason to believe that Michael is anything above an average Survivor player, and I don’t understand why everyone is giving him so much credit for sticking around when we haven’t actually seen him put in any work with these people and just seems to get chosen to stay each week.

Desiree feels bad about not being able to prove herself in the challenge. Watching this episode, I felt terrible being forced to root against her. She’s so likable and charismatic and it would thrill me to no end to see all three black people make it to the merge this season. My only glimmer of hope was the notion of Kellyn and Des being so sketched out by Angela and her potential to flip that they vote out the swing vote, a la Christy Smith in Survivor: The Amazon. But alas, the three Naviti ladies stick together and that snake Michael voted with them against poor James. I knew it was coming from the way they gave him the space to tell his story this episode, but I’m glad that they did. He tells us about being in this country having no one, and making his life and finding so much success out of that experience. It is true that in this episode he had no one, no allies, no luck, no advantages, but he did come out of the experience with the burden and the privilege of being a role model to so many with stories like his, stories of being first or second generation in a country that isn’t always receptive to your attempts to blend in or win allies. I am glad that James has had more success in life than he did on Survivor. On a note of sincerity that comes from genuine admiration rather than simply my appreciation for his rocking bod, I will really miss him and hope that we get to see many more examples of positive representations of Asian masculinity on this show, because they are so lovely and so sparse.

A closing thought: I’m still firmly convinced Kellyn wins this season. This notion was only solidified when Jeff asked everyone on the tribe whether they make decisions with their head or their heart, and Kellyn, asked last, responds with a resounding: “Gut.” She’s set apart from the rest, and if there’s something Survivor loves more than any brainy, brawny, or emotional player, it’s a gutsy player. With that in mind, I’ll see you next week, where hopefully I will have recovered from the loss of my greatest Survivor crush since Ethan Zohn.