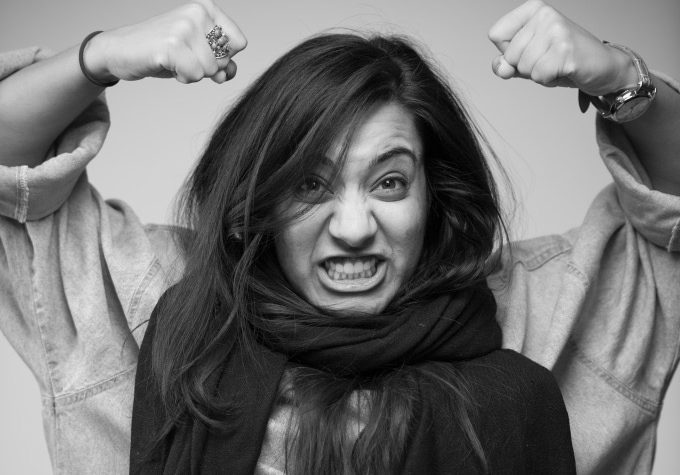 Anusree Roy’s Little Pretty and the Exceptional was a part of Factory’s 2017 season, tackling the daunting but relevant themes regarding the stigma and the realities of mental illness within an immigrant family in downtown Toronto. Shruti Kothari brought her robust talents to the role of Jasmeet, managing the unexpected feat of capturing emotional depth and a contrasting comedic brightness in her portrayal of a younger sister who witnesses her sister’s mental health deteriorate.

You mentioned your parents in one of your online bios. In what ways did they support your dream to be an actor?
Oh, boy. In so many ways – my parents took me to the theatre. That was the biggest thing. My parents loved the theatre. When they were dating, they went to the theatre, and I heard about them dating and going to the theatre together, first off. But then they took my sisters and myself to the theatre, and it was constant. So there was that. The fact that they shared their love with us.

Secondly, they didn’t laugh in my face when I was three years old saying “I loved Midsummer’s Night’s Dream! I want to be an actor!” But they are Indian parents, so of course they were like, “Oh, make sure you have a backup!” [laughs] So there was that.

So many different things. I went to a performing arts school. I got to pursue my dream, and I wasn’t berated for it, or ever made to feel that that was not worthy. So I was given by them a gift of valuing my own opinions and my own desires. That’s why.

How did you get involved in Little Pretty and the Exceptional?
A number of years ago, I had the great pleasure of working with Iris Turcott. I was a part of the Factory Mechanicals program in the first year that they did it, which was basically training young actors who weren’t fresh out of school and had been working a while, but weren’t quite established yet and were in that in-between.

It was headed at the time by the two artistic directors of The Factory of Time, Nina Lee Aquino and Nigel Shawn Williams, and what we did there was little training exercises, classes, workshops. One of them was with Iris Turcott, who was a brilliant dramaturg. She was dramaturging Little Pretty and Exceptional at the time, and she recommended me to Anusree [Roy, playwright] for their first reading of the script, the first workshop.

Unfortunately, I couldn’t do it, and I was very sad. But then I ended up meeting Anusree doing another workshop, another play of hers, and after that, when they did the second workshop of Little Pretty, fortunately I was available, and that’s when I got to meet Jasmeet for the first time.

I fell in love with the character. I was very lucky to be part of the process of developing the play with Anusree, and developing the character, and I was also fortunate enough to be able to play her because Brandon Healy [director] and Anusree and Nina and everyone else involved said “Let’s cast this one!” That was very nice.

I noticed that your portrayal of Jasmeet was often punctuated by a lot of physical movement. Are physical details like that often a part of your characterization?
Physical movement, yes. Physical movement like that? It’s dependent on the character. I like to be in touch with my body as a human, as an actor. Applying that to my character is equally important. That sometimes means not being in touch with your body, because certain characters are not in touch with their bodies, are not grounded. In terms of my physicality in understanding that, that doesn’t always serve a character, and it doesn’t always serve a story. For Jasmeet, specifically, she had so many layers in that her surface level was so flighty, and you got to know her more and more, and she had so much more depth.

Roy’s play deals with some weighty themes of trauma and mental illness. Jasmeet is more often a witness than directly affected. How do you think her perspective contributes to the bigger story that Roy is telling, specifically around trauma and mental illness?
Well, for one thing, saying that Jasmeet is just a witness? I would not necessarily agree with that, because the thing about mental illness is that, certainly in this story we were telling- it centred around a girl who was having a mental breakdown, and the decay over time- but for me, the story was a family story, and Jasmeet, and Delpreet, the father- I don’t think that they are just witness to mental health. They experience things themselves. Yes, they are witness to Simran’s breakdown, certainly, but in the play, we never actually labelled what it was that Simran was diagnosed with. We never categorically said it, and the reason we wanted to keep it somewhat ambiguous was because of the spectrum of mental illness – it’s so large, and we didn’t want people walking out of there saying, “Oh, I saw that girl do this. She had this.” It doesn’t work like that.

Who knows, Jasmeet could also have been going through her own mental health issues. In my opinion, she was. She was in denial for much of the play. She’s also ignorant of a lot of things about her past. Delpreet is going through mental health issues, as well. I won’t say that this is only the South Asian diaspora that has this problem, but there is such huge stigma behind mental health everywhere. We concentrated on the fact that within South Asian community, at large, it is still not talked about a lot, and so just wanted to bring it to the forefront a little bit more.

Tell us a little bit about working with Brendan Healy as your director.
Brendan was great. We met at auditions. Actually, funny story – I met him many years ago, fresh out of university. I don’t think he remembers it. I told him. He was like, “Oh.” It was a great moment- Anyhow, working with Brendan was very, very interesting because he brought his own personal life experience into the room, with regards to multiple issues that we deal with in the play, and he was not afraid to share that with us. He listened to us, the cast. It was tough material, but I think we were able to make a family.

Was Anusree involved in the rehearsal process very much?
Well, yes – what ended up being the final cast was able to be a part of two of the workshops prior to the production, if I’m not mistaken. So in that sense, we got a lot of time at the table with Anusree working things out. That was a huge benefit even before entering the rehearsal space. We’d already built relationships with the characters we were playing, and we were able to speak to the writer, and pick her brain.

Once we started rehearsals, I think we saw Anusree a couple of times during the process, and maybe once a week, and when we got into previews, we’d get new pages here and there. It was a brand new piece. We had previews, and we had to see how things read to an audience, because that’s the final piece of the puzzle, right? You can’t know until you have brand new eyes on the piece. From there, there was script changes, so she was quite involved.

Was there anything that surprised you about the character during the rehearsal process?
So much – of course. If I were to say no, that would make me such a crap actor [laughs]. Maybe I’m just saying yes so I don’t seem like a crap actor.

What’s up next for you?
Right now, I’m in Stratford for the 2018 season, and it’s looking like it’s gonna be a fun season. We started rehearsals a couple of weeks ago. I’ll be doing a couple Shakespeares, and then I’m lucky enough to work on a new play again.

It’s actually a very old play. It was an Italian play, and this is a brand new translation. The show is called Napoli Milionaria!, and I play Maria Rosaria, who is the daughter of this family of four, who run a black-market coffee shop during the second World War. It’s a dark comedy. It’s gonna be great. Right up my alley.

Is there anything you’d like to add?
I’d like to add that I wish I came across more delicately and gracefully than I am coming across now. But thank you for your time, and this has been nice – it’s been a while since the show closed, and it’s nice to revisit the character like that.