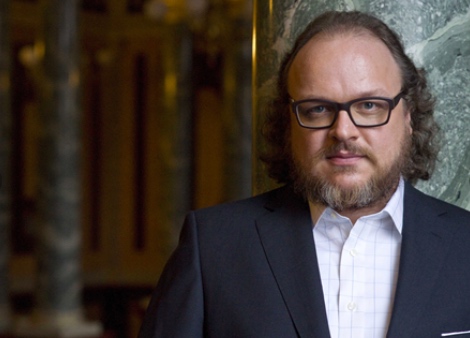 German bass-baritone Markus Marquardt is nominated for Outstanding Opera Performance for his turn in Tosca with the Canadian Opera Company. As the villainous Baron Scarpia opposite Canada’s own Adrianne Pieczonka in the title role, Markus delivered a mesmerizing vocal performance paired with an insightfully restrained physicality that added new dimension and intriguing psychology to the classic character. While performing Verdi’s Otello at the Semperoper in Dresden, Germany, Markus took some time to reflect on his time at the COC and share his favourite non-opera Toronto memory.

Can you remember your first experience with opera?
Don Giovanni, as part of a school trip to the opera house!

What is it about opera specifically that made you want to pursue it professionally?
I found it amazing how loud you can sing without the need for amplification.

Where did you train?
I started out in the local church choir, the conductor then became my first teacher. Later I studied at the music college in Düsseldorf.

How does working with the COC compare to other international companies?
You are dealing with professionals at the highest level, but still the atmosphere was always friendly and relaxed.

Your nomination is for Tosca. What were some of the challenges of that production?
It is a classic production in the best sense of the word. It tells the story in a very straightforward manner. Therefore, there was only one challenge, which was the way Scarpia bleeds on stage as he is being assassinated. For that effect to work, I had to find a small hole on stage in which I had to fall in a very specific way to make it look as if the blood was coming out of my neck.

When performing roles that have been performed so many times before, how do you approach making your interpretation all your own?
I try to get completely inside the character for every performance. Which is particularly interesting when you play a villain, since you are, hopefully, a very different person in real life!

Did you have a favourite moment in Tosca?
The church encounter with Tosca and the following ‘Te Deum’. In this scene all the darkness of the opera is set up and put on display.

Tell us about working with Adrianne Pieczonka as your leading lady.
A terrific colleague, very warm-hearted and always helpful. Also the best Tosca around at the moment.

How is a performance altered by who’s at the podium and what was Keri-Lynn Wilson’s effect?
Keri-Lynn was very inspiring. She always kept close contact to the stage, so one felt in very safe hands.

Who are some of your favourite composers?
Puccini, Verdi, Wagner.

What has been your favourite role to date?
It would have to be Scarpia, Rigoletto and Fliegender Holländer. I find it impossible to choose!

Do you have any dream roles?
Wozzek and Hans Sachs.

As a bass-baritone, you play a lot of villains. Do you enjoy that archetype or do you ever long to be the hero?
It’s great to be the bad guy on stage and to work on a character who is the opposite of oneself. That is part of the fun of opera and drama.

What are you working on now?
Currently, I am singing my first Jago in Otello. He is so bad, that even Scarpia refers to him!

Is there anything you’d like to add?
I had a wonderful time in Toronto and at the COC. Next to my work on Tosca I was particularly impressed by a game with the Blue Jays. On the day of my visit they delivered a great game and won.