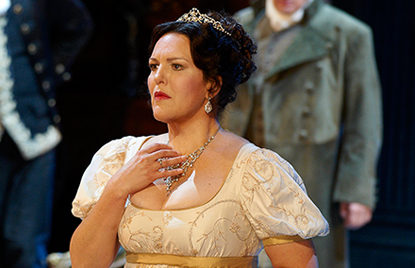 The lights go down, the famous crashing motif begins and the curtain immediately flies up to reveal the chapel of a massive Roman church, into which an escaped prisoner appears, searching for refuge. Giacomo Puccini’s famously sensational work cuts through all the introductory formality (no overture!) and instead plunges us straight into the drama, sparing us from warming up to the proceedings and instead demanding that we snap to attention. The story, taken from Victorien Sardou’s play La Tosca, is not an especially complicated one, but it is extremely eventful: the setting is Rome, in 1800, with Napoleon’s army threatening to take Northern Italy, and Cesare Angelotti (bass-baritone Musa Ngqungwana), an escaped political prisoner, has fled to the church of Sant’Andrea della Valle to take refuge with his friend Mario Cavaradossi (tenor Marcelo Puente on the night I saw, alternating with Kamen Chanev). A painter and political idealist, Cavaradossi is in love with the opera’s heroine, the stage-performer Floria Tosca (soprano Adrianne Pieczonka, alternating with Keri Alkema). She feels the same for him, but is manipulated by the perverse and megalomaniac police chief Baron Scarpia (bass-baritone Markus Marquardt, alternating with Craig Colclough), who intends to monitor her movements to track down Cavaradossi and Angelotti, all the while planning to seduce and dominate her. The final two acts trace the dramatic fallout of his plans and Tosca’s attempts to evade him while saving Cavaradossi, as Napoleon edges closer and closer to victory.

The main angle of Paul Curran’s production (last seen at the COC in 2012) is simply that it stages the opera with relative straightforwardness, avoiding any kind of high-concept, unexpected take on the original work. This is your dad’s Tosca – in my case quite literally, since my viewing companion was indeed my father, a life-long opera aficionado who has always been wary of underlit, overly abstract interpretations of the classics. Curran’s program notes emphasize the human drama of the opera, and how it is devoid of any fantastical or supernatural plot element to detract from the interpersonal dynamics of the characters.

On the one hand, leaning so confidently on the opera as written occasionally helps lend credence to Joseph Kerman’s notorious summation of the opera as Puccini’s “shabby little shocker”: a melodramatic spectacle whose soapy romantic intrigue, explicit power struggles and violent twists substitute for a genuinely human musical drama. The propulsive orchestration rarely leaves us in doubt as to how we should be feeling, from the strings-thrumming ecstasy of an unexpected reunion to the percussive shock of a sudden murder. Characters can come off as either ruthless or noble, and rash decisions are made on the fly, often at the most inopportune moments.

Still, between the strong performances, sophisticated and beautiful set and lighting work, and Curran’s focused direction, a complicated and human story comes through quite clearly, while the orchestral sweep and high drama is allowed to unfold with minimal modesty. Pieczonka, who has performed the title role several times now, is confident and compelling at all times, and finds many moments to subtly gesture towards the burden of the many feminine ideals (ranging from Mary Magdalene, to the Madonna, to the more free-spirited actress persona) that she is expected to inhabit at different moments. Puente makes Cavaradossi’s idealism comprehensible without reducing him to a bleeding-heart good guy. Marquardt’s compelling Scarpia is an interesting case: while the character sings of dominating and disposing of women and revels in his love of violence, Marquardt’s physical interpretation is more restrained and almost repressed, creating in many ways a more plausible power-hungry bureaucrat than the more two-dimensional figure that comes through in Giuseppe Giacos and Lugi Illica’s libretto. Ngqungwana ’s brief appearance as Angelotti is well-played and brings us into the story with his exciting presence. All sing beautifully, with Puente’s rich and nuanced tenor being a particular standout.

Curran uses the COC resources to stage the big moments with appropriate grandeur while elegantly connecting them to the story’s key themes: the Cardinal’s procession in the Cathedral at the end of Act One ends with a row of nuns lying on the floor and supplicating themselves before both the Cardinal and God as Scarpia lurks in the background, his own plot to consecrate power over Tosca coming to fruition; a wary gaze cast by Tosca at the large portrait of Mary Magdalene as people sing of Tosca’s virtue and nobility throws into relief the many roles Tosca feels compelled to play, before she makes a vital, character-defining decision in the cathartic Act Two finale. The staging of the finale is somewhat rote, as if everyone were suddenly desperate to get home, but the power of the story, aided by the excellent COC orchestra and strong conduction by Keri-Lynn Wilson, manages to land the moving conclusion all the same.

Kevin Knight’s gorgeous set design is all grand, cavernous rooms signalling theocratic dominance and wealthy privilege, aided by David Martin Jacques’ evocative lighting. This is particularly evident in the first two acts: from the sweeping columns and nave of the first act’s church setting to the plush desks and French windows of Scarpia’s second act apartment, the only abstract idea onstage appears to be that every room in 19th-century Italy was in possession of the exact same tiled floor. This changes with the third act set, a dank, fenced-in prison (complete with, yes, tiled floors), buttressed by what looks like one half of a power plant funnel from which Tosca makes her final, infamous move. It’s a stark set, which makes sense in terms of the unromantic setting, but as opposed to the straightforwardness of the earlier designs which allow the luxurious beauty of the church and apartment settings to grab our attention without monopolizing it, the drab look and confusing layout (lit by a seemingly unmoving dawn sun) distracts from rather than enhances the drama. Nevertheless this production is a sweeping, grand affair, a strong introduction to the opera for those unfamiliar with it and an easy-going respite for those who want a sensationally straightforward night at the theatre.