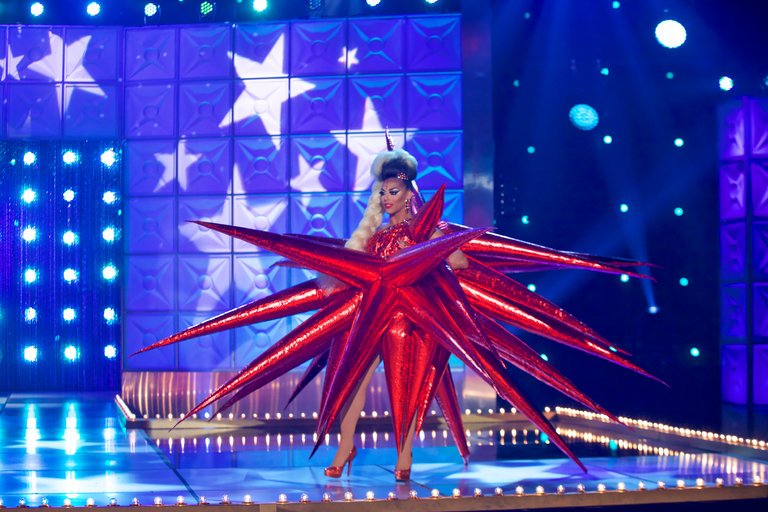 Drag Race All Stars, S3 Ep7: It Ain’t Over Til the Fat Lady Twerks

Hoo boy, Drag Race fans, what a week for our beloved little show. It feels like Ben dela Creme’s dramatic exit was weeks ago, having been overshadowed by a slew of inflammatory remarks and subsequent apologies from Ru himself in the news this week. I’m not here to recap that conversation, though I do think it’s important to bear in mind the limitations of our host as we turn to this episode. After all, the show has never been more political, and Ru makes that very clear by providing us resources and encouragement to contact our representatives, as well as bringing on a woman who is no stranger to divisiveness, Nancy Pelosi, to offer the girls some encouragement in the workroom. The nature of political movements is that there will be growing pains, and there must be room to question its leaders. I found Ru’s apology to be sufficient, though I will bear these remarks in mind as we start to wrap up All Stars and look toward future seasons, where we hope Ru puts his money where his mouth is in terms of casting more gender-diverse queens.

For now, let’s talk about an equally pressing issue: WHOSE LIPSTICK WAS IN BEBE’S BRA?! The resident champion refuses to divulge the name, even though that has been part of the post-elimination ritual for the entire season to this point. I will also offer that I was at a viewing party in Chicago hosted by Bebe, Morgan, and season 2 legend Jujubee, and even live Bebe played coy and refused to spill the tea on that particular piece of information. It’s frustrating, and also lends more evidence to the notion that Bebe is a bit above it all, an idea that will only get more credible through the rest of this episode. Between her haughty portrayal of royalty, and the fact that Bebe hasn’t even seen some of these other girls’ seasons of the show that launched her career, she doesn’t exactly come off as a queen of the people.

Ru and Nancy introduce this week’s maxi challenge, a mashup film of some of the most iconic female characters in cinema, called My Best Squirrel Friend’s Dragsmaids Wedding Trip, a combination of comedy, acting, and pure vulgarity. As a “welcome back gift,” Morgan gets to assign the roles. Minor drama ensues when she promptly ignores Trixie’s input for which roles she would like, and Morgan also sort of screws herself by confusingly giving herself the hardest role of the Beige Swan. Celebrity Big Brother runner-up Ross Matthews makes this clear when he’s directing Morgan and basically has to instruct her on how to make this role funny. Other stumbling blocks include Bebe’s aforementioned Queen, which is regal but stuffy, and Kennedy’s La La, a take off on Emma Stone’s character, which will ultimately read to the judges as one-note and land her in the bottom with Bebe and Morgan. I do think the critique of Kennedy that it wasn’t enough like Emma Stone was a little unfair. They were asked to play these over-the-top characters, not do a spot-on SNL impersonation of the actresses who originally played them. More fair, however, is their note to Bebe that she didn’t even attempt a British accent for the queen, which Bebe responds to by saying that she thought the accent might come off as rude. This sets Ru up for the best line of the episode, when he responds, in pure shock: “For this show?!”

Despite Morgan garnering an LOL from me with the quacking as the Beige Swan, it’s Trixie and Shangela who clearly knock it out of the park as Sharon Frockovich and Actavia respectively. Trixie brushing her hair back with her plastic baby’s hand better be gif’d by the time I finish this recap for me to use on Twitter. It’s also worth noting that with the finale next week, I’m planting my flag that my preseason prediction of the winner being either Trixie or Shangela is 100% going to come to pass, and honestly I’m thrilled about it, despite the fact that this week’s fascinating mirror conversation does bring up some questions about Trixie’s career.

It’s no secret that Trixie has made the biggest career outside of this show, with Shangela just behind. While getting ready, the queens discuss how their careers have manifested in the real world, and influenced their behavior at other drag shows. Queens like Morgan gush about how they love to bring people up on stage with them and grant exposure to other queens, while calling out Trixie for not being so generous with her time and money with local queens when she performs. Trixie is clear that she’s simply a private person and when she goes out to shows just likes to stay out of focus and not make it about her. Some inside tea: Detox showed up at the viewing party I was attending and spoke about how this is a little bit of bullshit from Trixie, who Detox has spotted sitting front and center at the shows, basically in the spotlight, while barely engaging with the queens on stage, simply stoically handing them dollars. Detox’s point being, people who are just trying to stay out of focus don’t sit front and center at drag shows.

The reason I’m fascinated by this conversation is because it really acknowledges the blurred lines between this competition and their real-life careers, especially on the heels of Ben’s exit, which has been accused of being a PR move, even by some of the other queens like Morgan. It brings up important questions of responsibility and accountability: Is it necessary for America’s Next Drag Superstar or a Drag Race Hall of Famer to use her platform to help other queens? Is that part of the criteria? Should it be? Or can this reality show exist in isolation, and someone can win the show without having good drag practices out in her real career? It’s something worth thinking about, and I’ve been enjoying how All Stars brings the competition and these queens’ careers into conversation with one another more than the newbie seasons do.

The category on the runway is Red for Filth, and everyone looks amazing. I have basically no critiques of anyone’s outfit, which is fine because this runway was literally 45 seconds long and clearly not the focus of this episode. After watching this mess of a movie, the tops and the bottoms are announced and they head backstage to delay the inevitable of Morgan going home because, duh. She missed half the competition. Trixie notes that she would have had to “walk on water” to get through this week, which is essentially true. No queens or fans are going to want anyone to lose a spot in the finale to someone who missed more than half of the competition. We also learn in this conversation that Kennedy doesn’t know how to pronounce “meme,” which is extremely cute and I’m so glad we get to keep Kennedy for the entire season, I love her so much. I legitimately started tearing up when she talked about how no one wanted to talk to her or get a picture with her at meets and greets after her season, and I have now made it my personal mission to completely fangirl over Kennedy because I STAN.

Anyway, the lip sync is the best thing in the entire world when Shangela comes out in a fat suit. Trixie doesn’t stand a chance and I could have watched Shangela do this for approximately 18 minutes straight without getting bored or ceasing my laughter. God, I love Shangela. She sadly eliminates her sister Morgan, and Morgan can’t help but completely understand.

I love this top four, and I’m extremely excited for the finale. I don’t see Bebe winning (and I sort of hope she doesn’t), but I’m happy she’s gotten this far and got a chance to prove herself and get the exposure she lacked on season 1. Kennedy isn’t going to win but I would be fine if she did and am happy she got to ride for this long and turn out some truly iconic looks. And whether it’s Trixie or Shangela, I have nothing but respect for my All Stars 3 winner. See you for the finale, now let the music play!