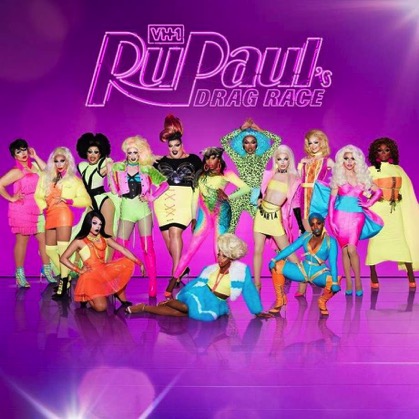 Drag Race, S10 Ep1: Come for the Face, Stay for the Crazy

Hot on the high heels of last week/season’s catastrophic All Stars 3, It’s a brand new season of RuPaul’s Drag Race, and in the words of the last true all star: HALLELOO! This premiere was great! This cast had a lot of pressure (unbeknownst to them at the time of filming) to put up or shut up in order to keep the longtime fans happy and the newcomers interested and they delivered. Even the girls that I had pegged as early flops gave us at least a few good TV moments: Kalorie’s Karbdashian Williams’ lip sync, Kameron Michaels making the other queens sweat with her rocking boy bod and getting read for filth for her face dots by Michelle, and sweet Vanessa Mateo giving me all the soundbites, “Like a hooker on rodeo drive, kinda ghetto but eloquent.” Aren’t we all.

Some notable entrances to the workroom included Blair St. Clair who literally sings a bar from the musical the Drowsy Chaperone but inserts her name, which I love but I can already tell this girl is going to be kind of exhausting. She is approximately 11 years old and seems like she and her friends would spontaneously sing “La Vie Boheme” at a diner, making life miserable for all the other patrons and employees. Monet X Change is one of the queens whom I had not heard of before this cast was announced, however, I am now fully on board. She looks great, she gives great confessional, and she turns it out in the challenge. All. In. The Vixen is repping Chicago from head to toe and is 100% correct when she claims that Chicago has the best drag queens. The Vixen is very outspoken, political, and does come off a little cocky, and I can see her becoming somewhat of a villain of the season, particularly after she later inserts herself into the Aquaria/Cracker drama during Untucked, eliciting a mixed response from her peers. I will just say I am not here for another talented black queen becoming the villain for her “attitude.” The show managed to make me unable to stand Nina Bo’nina Brown, but they need to pick another archetype to be their antagonist because we can’t go through this again.

Speaking of Aquaria and Miz Cracker, they have a rivalry around New York City that I can only imagine comes down to Cracker being very good and Aquaria being not. I’m sorry, I know there are a lot of Aquaria stans out there, but I’ve seen this girl everywhere on social media the last couple of years and I don’t get it. She’s polished for sure, but what’s the gag? She’s young and pretty and from New York. Great. She claims that Cracker steals her looks, but honestly I don’t really care who’s right in this conflict, I care who is better, and it’s Cracker. I love that she comes in with her signature “TIME FOR DINNER!” that her instagram followers will recognize from a recurring bit she does on the platform. I would also like to point out that Cracker has written thoughtful pieces for Slate since long before she was cast on season 10, and has a real commitment to thinking about the LGBTQ community. She’s also one of the few outspokenly Jewish queens on the show, and I love how she leverages her upbringing in near-poverty to slay on this drag on a dime maxi challenge, telling us, “My mom taught me to comb the streets looking for garbage I liked and make it into something fascinating,” which also characterizes my dating life.

For the mini challenge, the queens must navigate, dance, and vogue their way through what feels like hundreds of queens from past seasons. Some are already their friends or family, while some are taking an honest and unbiased first look at what this new crop of girls (and Eureka) has to offer. Eureka to me seemed surprisingly low energy for someone who has the most to prove after injuring herself and being invited back this season to finish what she started. I think she’s somewhat protected for a few weeks as long as she doesn’t royally screw up, because Ru wants her decision to bring Eureka back to look like a good one, and she’s also the only really qualified big queen here, as Kalorie is certainly not long for this world. I was pleasantly surprised by Dusty, and, to reiterate, blown away by Monet. It’s also extremely lovely to see some of these former contestants back and giving confessional. Particularly hearing from Adore and Jinkx made my heart happy. Hearing Bob sing the praises of her daughter Cracker was also very lovely.

I will now take this time to address the elephant in the room: A lot of these girls are fine as hell out of drag. Between muscle queen Kameron, cute and curly Dusty, the unclockably beautiful Yuhua, and Monique and Monet in their statement glasses, this is pound for pound the hottest crop of boys this show has ever assembled.

Anyway, now that I’ve cooled down, let’s go to the maxi challenge: They will be recreating the drag on a dime challenge from season 1, episode 1 of RuPaul’s Drag Race, in which they will have to create inspired looks out of 99 cent bin garbage. Points of drama include Dusty and Blair making very similar silver metallic looks, and Cracker and Aquaria doing the same makeup look, which culminates in Aquaria giving us a for real, honest-to-God, “I didn’t come here to make friends.” Sigh. Monique Heart is feeling extremely confident and will be the first this season to whine about being safe instead of winning, which is always a very flattering look. Eureka talks about her painful recovery process after her last season, and not to be rude, but if this season involves this much sob story from Eureka every episode I’m going to be over it pretty quickly. She’s whined about her knee twice, and in Untucked she’ll get emotional about her mom, and it’s just too much girl! Spread it out a little bit over the season!

Anyway, Cracker’s makeup turns out better than Aquaria’s, though both of their looks are pretty damn fierce. Asia looks cute but messy, and I hope she sticks around long enough to show us some high fashion because she is stunningly gorgeous. Blair actually does better than I expected. The garment doesn’t actually look great on her, but it’s well-made from what she had and definitely an original design from the young lass. I’m very obsessed with Mayhem’s deconstructed pool noodles simply because I don’t understand how she crafted that in that amount of time. It’s unreal and it looks cute! Eureka and Yuhua come out in looks that I can only describe as “passable,” though I will say Yuhua really caught my attention this whole episode and I’m looking forward to seeing more. Finally, I’ll say it: I thought Vanessa Mateo’s barbie look was cute! I thought the barbie glued to her head was funny! I did not think this look was worse than Dusty’s metallic conehead fantasy, so I was sad to see her in the bottom with Kalorie, whose poorly made unoriginal money dress was screaming bottom two.

They announce the girls who are safe and introduce guest judge and local hero of Pittsburgh, Pennsylvania, Farrah Moan – I mean, Christina Aguilera! She’s a very good sport about being compared to Farrah even though she can barely eke out an impression of the queen. They really do look like twins though, in a way that is somewhat uncanny and served the double purpose of giving us a laugh and the queens a heart attack when they thought Farrah was actually returning to the competition.

Mayhem wins handily and I am thrilled. She’s emotional from the validation and I’m so excited for her because I think she’s really something special and can go all the way. Cracker impresses with her sharp wit, “Miz Cracker if you’re nasty,” “I’m disgusting,” being a stand out line of the episode. She is safe along with Dusty, Blair (whose look the judges liked way too much), and Yuhua. Kalorie and Vanessa must lip-sync for their lives to Xtina’s second-best song (“Fighter” is the best, do not @ me) “Ain’t No Other Man,” and it gets off to an underwhelming start until Kalorie starts throwing money and Vanessa starts throwing shoes. It ends on a high note and can I just say I’m so happy to have Lip Syncs for Your Life back instead of For Your Legacy? There’s such an element of survival mode in these that I’ve been sorely missing from All Stars, when people would win their lip sync and then whine about it because they had to make a hard choice. Ultimately it is Vanessa Mateo of the famous Mateo clan who must sashay away, but not without leaving her mark. She was fun and cute and really didn’t do that badly in the challenge, and I hope this is the beginning – or middle, as she already had a bit of a social media following – of a great career for her.