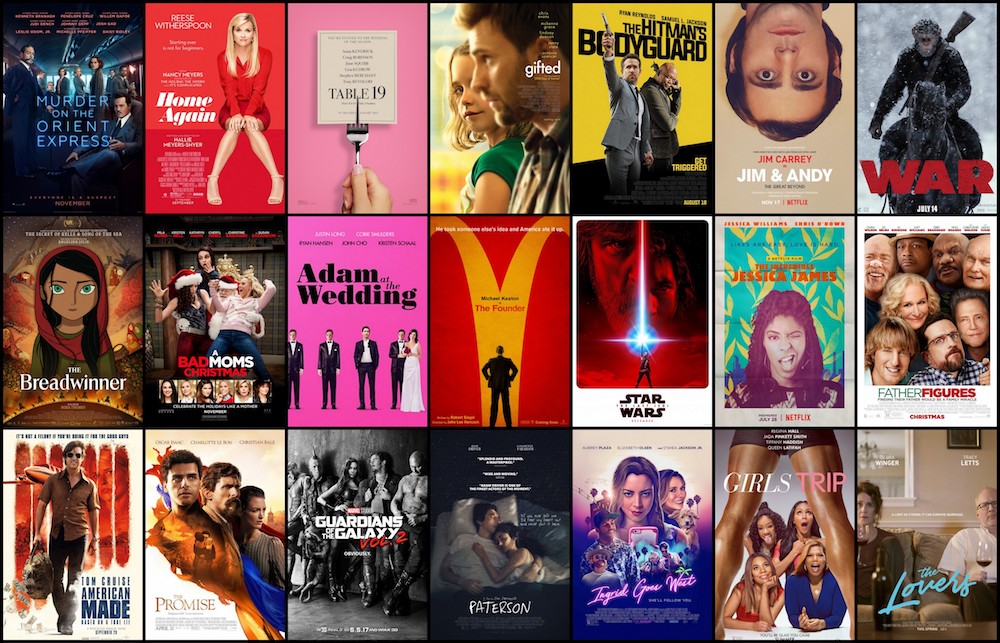 This is the part of the list that takes me forever to publish because it’s all the movies I liked enough that they’re not fun to trash but didn’t like enough to actually enjoy revisiting. Their biggest crime was generally just that they failed to make me care.

64. Murder on the Orient Express
Stylish but boring, this better-than-reputed adaptation had no real excuse not to be great, which is why it’s so maligned. I was very happy when Johnny Depp died.

65. Home Again
Yay! I’ve written a lot already about this thoroughly fine rom-com that’s just so unapologetically a rom-com that it almost feels rebellious for being so beautifully unoriginal. Movies like this make me happy. It’s not “good” per se, but I liked it.

66. Table 19
This cute misfit indie went predictable places but it was awfully charming.

67. Gifted
I love love love #1 Chris’ taste in weird “I have 2 weeks off from Marvel filming, let’s make a movie!” roles. He never goes in the direction I think he’s gonna go. This sweetheart uncle/niece story about a gifted little girl is a lovely showcase for his left-behind rom-com side, his sneaky intellectual side, and his thoughtful do-good side (#1 Chris is, at minimum, octogonal). The movie’s a little simple but the unexpected soulmate pairing of Evans and Slate is the best kind of fire and it got lit while filming this thing.

69. Jim & Andy
This doc is fascinating and disturbing but, at the end of the day, it comes out as fan service when it should be a measured critique. I’m far from a Jim Carrey hater but the antics caught on film here are abusive, irresponsible, and dangerous and “look what he did in the name of art!” is the wrong take.

70. War for the Planet of the Apes
A beautifully made film with a breathtaking central performance from the great Andy Serkis, this movie is only ranked so low because I just don’t care about the Ape movies. I can’t get myself to buy in so it all seems silly to me.

71. The Breadwinner
The animation is beautiful but I just found this boring.

72. A Bad Moms Christmas
And, yes, I’m worried about what it says about me that I just called the Breadwinner boring but am calling this nonsense “a refreshing good time”. I love that the Bad Moms franchise has such a big heart and is so unapologetic in its silliness. It’s just fun with some great ladies (plus Justin Hartley free from This Is Us jail and Jay Hernandez being all “hey guys, remember Jay Hernandez?!”).

73. Adam at the Wedding
Also known as “Literally, Right Before Aaron” for some reason, this heartbreak comedy is pretty good. The supporting cast (John Cho, Ryan Hansen, Kristen Schaal, Peter Gallagher) is awesome and it avoids some clichés I was definitely not expecting it to avoid. I think I’m over Cobie Smulders, though. I think it’s time to remember Robin fondly and move on.

74. The Founder
Why must BJ Novak always play that guy- the soulless, calculated corporate meano who comes in to represent all that is wrong with America and make everything so so much worse? BJ Novak is wonderful, guys. He’s brilliant and insightful and fun in a smirking way and loving in an understated way- why does Hollywood insist that he play the evil idea man? Is it the smart thing? It’s totally because we’re villainizing intellectuals these days, isn’t it? Fine, we can pretend that his short stories weren’t literary masterpieces the likes of which I haven’t seen from any other writer this decade. Whatever you say, America. That is what The Founder is trying to be about, after all- America; the state of it, how it got here, what it believes in, how quickly it will forsake everything it purports to believe in. Unfortunately the complexity gets lost as quickly as the real ice cream that used to be in McDonalds milkshakes.

75. The Last Jedi
I don’t care about Star Wars. This movie delightfully undercut a lot of the stuff I really don’t like about Star Wars (the idea that random minutiae matters at all, chosen one narratives, intense fan theorizing) and did some cool things like let Poe be wrong and play with Adam Driver’s heart in that way that makes his face do that thing that makes my face do the other thing. But I don’t care about Star Wars and at the end of the day it all just feels like nothing claiming to be something.

76. The Incredible Jessica James
This movie gets too much about theatre wrong for me to like it. I like Jessica Williams a lot and I like this kind of movie a whole lot but it does that thing where the main character claims to love something then can’t give a good reason why and doesn’t seem interested in really fighting for it. Success comes too easily at the end of a movie where she complains too much about success not coming instead of self-producing like any self-respecting real young theatre-maker would.

77. Father Figures
Nah, too dumb. That Ed Helms is looking good these days, though.

78. American Made
I was so so so excited to see Tom Cruise in a movie where he had lines. Old-school fast-talking all-swagger Tom Cruise is one of my all-time favourite things. Too bad this movie was so very bad. I’m also exhausted by the fact that his wife is played by a woman 21 years younger than him. It’s gross and unhelpful and gross and I hate it.

79. The Promise
Boring. I still love you, though, Oscar Isaac.

80. Guardians of the Galaxy Vol 2
I loved the first one but the second one felt watered down and like it lost the character grounding that made the first one so special. Also, daddy issues and chosen one narratives are Played Out; TELL ME A NEW STORY!

81. Paterson
Like a poem- strange, structureless, emotionally evocative and precise, heavy on symbolism, light on narrative. Those aren’t my things, but don’t take that as a claim that Paterson isn’t good because it is pretty good and Adam Driver is great.

82. Ingrid Goes West
The production design and costumes in this single white female story are eerily on-point for the instagram generation and Elizabeth Olsen is perfectly cast as a woman so perfect it’s infuriating (because, seriously, how is her face so beautiful and her voice so lovely and her talent so ridiculously extreme all at the same time?!). But I just couldn’t get behind the protagonist and that kept me at a distance for too long.

83. Girls Trip
I generally like simple ladies-on-the-town movies, especially with a cast this good. But I didn’t buy the central crew as real friends (I think it was the improbably age divides) so, while everyone worked on their own level, the central conceit of the film didn’t make sense to me and even the frothiest of froth needs a base to stand on.