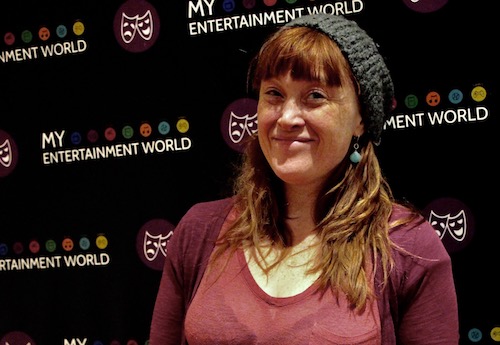 I saw 64 shows at the Toronto Fringe last summer. Of the countless individual performances I witnessed in those 12 days, few struck a chord quite as strongly as the vibrant Genevieve Adam in Seven Siblings’ emotional sci-fi drama Recall. As a brash, complicated mother desperate to help her troubled kid, Genevieve completely took over the giant Theatre Centre stage to earn an A grade back in July and an Outstanding Actress nomination in this year’s awards race.

Do you remember your first experience with theatre?
Oh, yes. I was 5 or 6, and I was taken to see The Lion, the Witch and the Wardrobe in Victoria, BC, where I’m from. I remember being “that. I want to do that.” It was some kid’s birthday, and I don’t even remember the kid or anything else. Just being like, “that business, right there”. My parents went “Okay, you can go and audition for something, and we’ll see what happens.” Little did they know what they were getting into. Fools. [laughs] Community theatre parents, right? Doomed for years.

What have been some of your favourite theatrical experiences over your career so far?
I think any time I’ve gotten to play a traditionally male role, like in Shakespeare. As great as Shakespeare’s female parts are, when you’re the man, you’re all, “look at all the things I say, and look at my licence to not be a very nice person.” It changes completely. I wouldn’t have expected it to, really – I would have said “well, the words are the same, and human emotion is the same,” but there’s something quite different about it.

How did you get involved with Recall?
I knew Madryn a little bit – Madryn McCabe, who’s one of the co-founders and artistic directors of Seven Siblings, who put Recall on. I knew her a bit, and thus was following their website, saw the audition call, and was like, “I’ll go audition for that, they seem like some fun kids.” [laughs] I was sort of getting to that age, where you’re in your mid-30’s, and suddenly everyone’s like 12 years old, everywhere. So I’m like “okay, all right, this is going to be my new normal, so might as well start here with these guys.”

What attracted you to the role and Eliza Clark’s script?
It’s a very smart script. Eliza Clark is pretty amazing. I feel that she’s pretty relatively unknown in Canada. She’s very famous in the US. She’s an amazing showrunner living the dream life in LA that I’d never heard of before, and it’s a very smart script, smart women, and I was a bit intimidated by parts of it. There’s a lot of love-making, there’s a lot of violence that has to happen. I was like, “oh, boy – but you know? This could be a real challenge. Could really run with this one, in a good way. Okay, let’s go for it.”

Actually, when you know that she’s gone into TV writing, and you look at Recall, you’re like “yeah, I could absolutely see this being TV writing.” It’s quite snappy and poppy, but without being ridiculous. It’s just the way people talk, which is great.

The cast is nominated for Outstanding Ensemble. Tell us a little bit about working with them, and specifically developing the mother-daughter relationship with Kyla.
Yeah, I was really lucky. Kyla Young is amazing. I was so excited when I met her – I was like “oh, this is great”. She’s incredibly talented. She’s just come off working in New York, and it all felt quite natural. Our relationship offstage is not the mother-daughter relationship of Recall, which is quite messed up and co-dependent. Basically, it’s a mother protecting her daughter, who is a serial killer. Which is an interesting idea, right? The mother’s literally enabling, finding boyfriends for her daughter to kill, to feed that addiction. But Kyla was just fantastic to work with, and she’s very chilled out, and fun. The whole ensemble was pretty remarkable, and I think that’s a combination of just luck and good casting. So it’s pretty exciting to have everybody nominated for their great work.

What were some of the interesting conversations you had with your director Will King while developing your interpretation of the character?
[laughs] They mostly centred around jean shorts. Our jokes were that somehow the shorts seemed to get shorter, the necklines got lower- it was all about leopard print, necklines, black bras. I mean, when you put that on, it wears you. Will King is always a fan of more violence and more nudity. I can’t lie, that’s fine with me. So there were a lot of wardrobe conversations. But also a lot of conversations about people who seem really tough, because she does seem very tough, this mother on the outside. But actually she is very lonely, and loves her daughter fiercely, but it manifests in this very bizarre way. Then it turns out the other female character in the show is my character’s sister, who is also a psychopath, so it’s this interesting thing about [growing up] with violence. We talked about her backstory and what that would have been like. Growing up with a sister who’s a killer, and having to protect the sister, and enabling. Then you have this child, who you love, but who is beginning to go – the lies you tell yourself. So we had lots of conversations about that. Lots of physical work. Will and Madryn and the Seven Siblings do a lot of Michael Chekhov work, very physical, which is great, because I can definitely get too heady about this stuff, so it’s like, “roll on the floor and be a raccoon for a while”. It’s very helpful. We did a lot of work on that kind of stuff.

Tell us more about Michael Chekhov’s technique and how it’s put into practice in the rehearsal room.
We did a lot of Michael Chekhov workshops. And Will’s very “take it or leave it, I present this to you.” He’s not like, “do the method or you are nothing.” He’s like “I present this to you, and you can take or leave, pick and choose.” Basically, it was just a series of different exercises. All sorts of things from how you would move physically to really imaginative stuff, like imagining what would be the worst case scenario for your character, what would be the best case scenario, what kind of animal is your character… all sorts of different things. What works for you, what doesn’t, and you just play around with it. Some stuff really lands, and some stuff doesn’t, and you can never predict which is going to be which. And some of it’s more my jam than others. Some days I was like “yeah, yeah”, and some days I was like “I don’t know. I DON’T KNOW what’s happening here.”

Madryn and I are working on a show right now, and to this day, I’m like “Madryn!” And she’s always like “you’re better at this than you think you are”, and I’m like, “that’s a lie, but I appreciate that lie.” Like with any new technique, it’s always fun to be learning a new technique, but also have the freedom to be like “nope! No, no. Not working for me today. Not working.”

What were some of the unique challenges and rewards of doing the Fringe?
I actually hadn’t done the Fringe in a long time. I haven’t lived here for a long time, living and working in the UK, and the Fringe in that time has changed into a thing to be reckoned with – from 2005, being the Fringe, to now being The Fringe. It’s a big deal. I think that was kind of a surprise to me. “Okay, we’re just doing this thing,” and suddenly it’s like “oh, this is a big deal,” and “oh, we’re at the Theatre Centre, and people are coming and we’re getting reviewed”.

You’re always rehearsing in crazy different spaces, and you get no time in the theatre, so your first show feels like your dress rehearsal. But with this cast and crew, it was a true ensemble. Everyone really pulled together, and I think there was no affectation about it. It’s like, “we’re doing a creative show”, and I think with Will being so specific about moments of what he wanted, it just made being able to roll with all the other crazy elements that got thrown at you last minute, like lights, it made that a lot easier for sure.

And the Fringe is great. Gosh. You get into the Fringe, you’re like “this is great, let’s go to the Fringe tent! Let’s go see other shows!” There’s a real buzz and a real addicted high to being in the Fringe, to being part of the Fringe. And then the reviews come out, you get a good review, and that’s wonderful, and then more people come to the show. It was a really great experience.

What were you hoping audiences would take away from the show?
Oh, it’s a dark show. There’s a lot of darkness in it, and the end is quite bleak, so I was hoping that people would see love and the humanity that was there. I was just hoping that people would find the quieter moments. The whole ensemble deserves to be nominated, but it’s so great that Luis [Fernandes] in particular got recognized for his work, because I think Luis often plays these really loud, brash characters. For him to play such a quiet, deeply in pain human being – he was really brave about bringing that out, I think. Stereotypically, that can be very difficult for men, and he really went there, so it’s pretty neat to see that quiet but really deep work.

Do you have a favourite moment of the production?
I think anytime we had to eat anything. Because the show is filled with food, and I do not like to eat things onstage. I can’t eat chicken wings- my teeth on the bone, ugh! I can’t do it. So I had to eat chicken wings, and creamed spinach- and everyone knows this about me in the cast- so I had to eat in pretty much every scene, and drink beer, and still fit into the short shorts! So there were so many jokes about the eating, and I feel that anytime that I was eating, people around me were just on the verge of totally corpsing and losing their minds. Watching me try to avoid – I’d bring the food up to my mouth, and put it down to talk, and Will would be “you have to eat the chicken! You talk about how delicious it is! So you bite it, and swallow it.” And of course you have all this food backstage, and the guys were just eating it, whatever comes back. And Kyla has all these allergies, so it was like really dry gluten-free bread, non-alcoholic beer – the guys were swilling it down. Luis and I smelled pretty amazing by the end of the show with all the non-alcohol beer that we were required to swill. [laughs] It’s a lot of fun with food in that show, definitely.

Do you have anything you’d like to add?
Just that Recall was a great experience, and that I’m just really thrilled for the whole production team, for Will and Madryn, for everybody else behind the scenes, for the ensemble, and for Luis to be recognized for the work. No more creamed spinach for me though, seriously. [laughs] I’m never eating creamed spinach in a show again. That’s it. [laughs] Thank you, Eliza Clark, for that tasty treat.