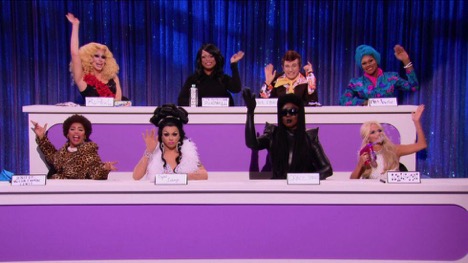 Welcome back to Ben dela Creme’s Drag Race! Thanks so much for joining me. I’m going to get this out of the way at the top because Dela is going to win Snatch Game here and she’s going to continue her reign of congenial terror and I have finally figure out why I’m not here for it despite her obvious domination. There’s a philosophy that gets thrown around surrounding drag race a lot that there are certain queens who are very good at drag but not very good at Drag Race. Queens like Roxxxy Andrews and Coco Montrese who seem like they have nothing much to contribute to RuPaul’s Drag Race but have amazing careers in the real world and clearly have enough to offer to be considered All Stars by Ru. Hell, this is even what’s going on with Trixie this season who is a superstar in her other work but flails on this reality show. I would like to posit that Ben dela Creme is the rare opposite: A queen who seemingly has nothing super special to deliver in her artistry, but is uniquely good at RuPaul’s Drag Race and possesses the specific set of skills to be very good at this particular competition. This may sound cruel, and I don’t mean to be derogatory of her and her work. It’s simply not what I prefer in my queens, and that’s why I can’t get myself on her side. I feel that the best drag has a message, shows something new, different, and artistic, and makes a statement. That statement can be anything from a political message to an iconic lip sync to a daring wig, it just has to say something. Dela’s brand of looking the same every single week, being adorable in a completely apolitical way, and goofing up the lip syncs in the exact same style every week doesn’t do it for me. It does for some people, and that’s great! It is valid to be a fun, silly, campy queen, since that is a huge part of what drag is! But that’s not my personal taste and I want more from an All Star. Now that we’ve gotten that out of the way, let’s get into the episode, because it is Snatch Game y’all!

In the midst of discussing their various poor choices for their Snatch Game characters, Shangela and Trixie get into an altercation over a note left by Thorgy that Trixie has pinned to her station that throws shade at Shangela for eliminating her. Trixie claims that she did nothing wrong by hanging up the note from her friend, and should get credit for not telling Shangela about it and keeping it to herself because she didn’t feel Shangela needed to see it, while Shangela correctly points out that her hanging it up at all is obviously hurtful to her. This is such a bad look for Trixie, I honestly don’t know why she isn’t just apologizing or at least saying “Wow that was really dumb, I wasn’t even thinking about it!” instead of standing her ground and pretending she was just keeping it there because it’s a note from her friend, as if it would have no impact on Shangela. This was messy all around for Trixie and only gave way to a further disaster episode for her, while providing the opportunity to continue Shangela’s dominant performance both in the competition and in terms of her rootability to the audience, which looks very good for her chances to go all the way in this thing.

Continuing her parade of poor decisions, Trixie decides to go for RuPaul in the Snatch Game, an impression that she’s done countless times on her web series Unhhh, that’s always good for a laugh. The problem is, her Ru charicacture is busted out for about 5 seconds when she does them, and is generally just to make one pun or corny joke. Of course it comes off one-note when she’s expected to do the same thing for a full 15 minutes, because it’s really less of an impression and more of just a gag. Like last week, I do feel bad for Trixie here. She’s so genuinely funny outside of the show and something about this competition just stifles the best parts of her. I’m hoping that this was a stumbling block, and she can at least go a few more weeks matching last week’s strong performance and getting through.

As for Shangela herself, she went with Jenifer Lewis, who I know as the grandma on Blackish, after giving up her original character when it was pointed out her Miss Cleo sounded Irish. She nails it enough to land in the top, but Snatch Game has gotten so obscure and hyper-specific it was hard for me to really laugh at her Jenifer Lewis humor, no matter how spot-on. Other obscure performances were Bebe’s Grace Jones, who I’m not sure any of the young watchers this show really know, especially now that it’s moved to VH1 and has so many mainstream and even straight viewers, Aja’s Crystal Labeija (I’m sorry I had to google this one, I don’t know my herstory!), and Ben dela Creme’s Paul Lynde, whom I only know because as a child I stayed home from school a lot and watched old reruns on the Game Show network all day. All of these were fine performances, Dela’s especially, but it’s hard to roll in the aisles when someone is mocking mannerisms that you’ve never heard before. Like many parts of Drag Race, Snatch Game has gotten so specifically tailored to the judges that it’s become less accessible to the larger audience. Chi Chi’s Maya Angelou was a total misfire that bordered on offensive, and Kennedy’s real housewife was nothing to write home about (though I think Kennedy was nowhere near deserving to be in the bottom three as compared to Trixie and Chi Chi).

The flower power-themed runway is cut pretty short with everyone looking beautiful and no one really missing the mark, but no one serving anything ultra-memorable either. Runway themes like this make me go all Miranda Priestly (Florals? For spring? Groundbreaking) and leave a lot to be desired in terms of high fashion, but that wasn’t really the point of this episode. Trixie breaks down when she addresses her disappointing performance, and honestly I don’t blame her. She came in here with likely the most fans of anyone, and had a lot to prove as a drag superstar on the outside world, but a drag super-meh on the show her first time out. She’s part of the pair that has the first ever scripted show starring drag queens on television for Chrissake! She’s obviously got the chops to be super entertaining, and I imagine it’s frustrating for her to simply not be able to make the transition and apply her skills to this competition. Chi Chi, as demonstrated by her behavior last week and her own admission on twitter, was so ready to go home this week I’m surprised there was even any debate for top two Dela and Shangela on who should go home. I have heard through the grapevine that Shangela was so determined to send Trixie home that Chi Chi had to personally plead with her to send her home over Trixie. I hate to think of Shangela as that petty over the note – maybe she just loves Chi Chi that much – but to send home a queen who desperately wants to be there, had a really strong showing last week, and has a powerful fan base that would almost certainly turn some heat on on Shangela, over Chi Chi who clearly did not want to be there anymore and finished in the bottom basically every week, would have been ridiculous.

In a twist, Dela and Shangela both win the lip sync, giving them both the opportunity to send someone home. Luckily, when their lipsticks are revealed, they both read Chi Chi and it stays a single elimination, which I think is the most fair thing given that Kennedy and Trixie really didn’t deserve to go home this week. I loved Chi Chi so much on her original season and was really rooting for her coming in here, but it was her time and I’m glad she left with her head held high and while she didn’t particularly stun on All Stars 3, she also didn’t do anything that will jeopardize or embarrass her career outside of the show, which is really what these queens should all be aiming for. I do hope that Chi Chi can get her head back in the game after a little time away, because if this Handmaid’s Tale twist finally pays off and one of the queens get to come back in that twist, she’s the eliminated queen I’d most like to see get a second chance. Let’s hope we find out soon, and that Chad and Alaska are as involved as possible.