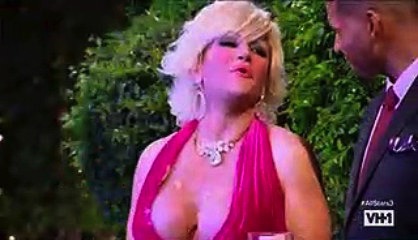 Drag Race All Stars, S3 Ep3: Will You Accept these Hoes?

Welcome back, bitchelors! I’m excited to announce that this season is now just like my dietary preferences: Dairy-free. That’s right, for the third week in a row the correct queen as been sent home and we move forward without a clear-cut villain and hopefully without any more meltdowns over not being in the top.

Milk really is the star of this episode, coming in hot by expressing that she doesn’t see Kennedy taking drag to an “all-star level” like Thorgy can. I can’t tell if Milk is A. Just sad about her friend going home, B. Knows that Thorgy going home means that she’s not far behind, or C. Just genuinely has no concept of how each contestant is doing in this competition. At any rate, this statement is insane. As predicted, Dela would have also sent Thorgy home, which doesn’t look good for Milk’s bellyaching.

Ru introduces the maxi challenge, an improvised parody of the Bachelor, starring Unreal’s delicious Jeffery Boyer Chapman as the Bitchelor himself. Each girl is given an archetype on which to base their character, with Ben and Bebe, Trixie and Milk, and Chi Chi and Shangela working together in pairs, which proves to be… Challenging. While Kennedy absolutely kills it on her own as the party girl, Trixie’s unfortunate pairing likely cost her a spot in the top two this week. Many of us know from Trixie’s work out of the show (on her fabulous YouTube series Unhhh with Katya and subsequent Viceland series The Trixie & Katya Show) that Trixie can be a riot when given the right format, but she’s never truly gotten to showcase her comedy on the screen. It was frustrating to watch Milk’s version of “going for it” and “giving it her all” be stepping on her scene partner. Trixie, who was fantastically in character as the fake bitch, barely got to land any of the jokes she started to stay before Milk – playing an incredibly unfunny one-note version of a stalker – would interrupt, and you could see the frustration on Trixie’s face. What’s truly irritating is that Milk probably still doesn’t understand what she did wrong. She genuinely believes that talking over Trixie and leaving absolutely no room for her scene partners to do anything made her better than Trixie, because she was doing her best to stand out. Anyone who’s even so much as seen improv should be aware that the number one rule is to not shut down your scene partners, and work with them to create comedy. There was virtually nothing Trixie could have done here, and Milk doesn’t see that as a problem.

Dela and Bebe prove to be a more cohesive pair, and each week my distaste for Ben Dela Creme becomes harder to defend. I never had a problem with her, I just never really bought her tiresome shtick, but I have to admit she has not missed a beat this whole competition, and absolutely slayed as the cougar character. Bebe put in some respectable character work as the pure virgin, injecting some of her own African backstory to the character, and at least managing to not be invisible with the much easier to work with, but still totally scene-stealing, Dela.

Chi Chi knew coming in that keeping up with Shangela was a tall order. From every cast interview I’ve ever seen with this cast of girls, Chi Chi is by far the quietest. Her incredible onstage charisma is clearly mostly performance, because while she is always fun and charming, she is not outspoken in these settings, and you can see it here. The pair is assigned to be a polyamorous couple, which leaves a lot of room for interpretation and inventing funny quirks, Chi Chi fails to totally rise to the challenge. While the one joke she does land when she asks Jeffery in her manliest voice if he wants to have her babies, is hilarious, she didn’t give us much to go on and was outshone by the delightful Shangela, despite Shangela’s efforts to help her out here and there. In addition to Milk’s total whiff and Chi Chi’s inability to stand out, we see the first major stumble from Aja so far this season in this challenge as well. Aja’s assignment is to be a ridiculously insecure girl, which she interprets as the same thing as a spoiled but emotional brat, which Michelle Visage points out is not the same thing at all, and just comes off a little confusing, with no actual jokes involved. Unsurprisingly, this will land Aja in the bottom three with Chi Chi and Milk.

The category tonight is the Roxxxy Andrews Memorial Wigs on Wigs on Wigs Runway. Let’s take a look at how the queen’s looks stacked up:

Tops: Trixie Mattel, as Jeffery so beautifully put it, looks like “Lady Bunny and Ke$ha had a baby,” which is literally everything I’ve ever wanted. Her wig reveal is very safe, just taking off a huge wig to reveal a small wig, but she looks lovely and on-brand. Chi Chi looks absolutely stunning. This is a very different hair and makeup style than we’ve seen from Chi Chi, and it’s absolutely the most beautiful she’s ever looked. Dela’s runway look is iconic. With a category that’s so straightforward, it’s hard to do something completely different. While everyone obviously reveals a wig on their head, Dela unfurls her frock to do a reveal of a bottom part of the dress made entirely of hair. It’s so creative and well-executed and I giver her major points for continuing to stand out everywhere she can. Shangela unpeels herself to reveal some corny, country fair realness, complete with popcorn in her wig and I love that she has the guts to keep the tradition of extreme camp in this high-fashion version of drag that is Rupaul’s Drag Race. While I didn’t actually love Aja’s look, we have to give her credit for being completely inventive, and in terms of the makeup once she takes off the inflatables, I have to agree with Michelle that this is the most gorgeous Aja has looked on this show. Kennedy’s shape is absolutely gorgeous in this dress, and the triple wig reveal, while not particularly inventive, shows just how beautiful her makeup is, working with all three different styles and colors of hair. Overall a very strong week for runway looks!

Bottoms: I’m sorry Bebe, this kimono looks cheap. The fabric looks like a child’s racially insensitive halloween costume. I loved the hair reveal itself, but for this challenge was it really enough? Unfurling a ponytail is not the same as actually having wigs on wigs on wigs, which was the challenge. It’s a boot, mama. Milk looks pretty I guess, but it looks like she just raided Thorgy’s closet after she left. Like Trixie, the wig reveal is very conventional and doesn’t do much for me. I like the idea of pulling out the longer ponytail but it’s clunkily executed. It’s a good idea, but the outfit is overall very safe.

Bebe and Trixie are safe, and it’s time for the judges critiques. Ross asks an excellent question to Kennedy: “Why don’t I think of you as a comedy queen?” and I wonder the same thing myself. Her snatch game Little Richard in her original was incredible and won her that challenge, and she has consistently shown up in acting challenges. I wonder if maybe the fact that Kennedy is older but doesn’t fit into a Pandora Boxx or Acid Betty role of “totally over the top queen,” nor does she fit into the Miss Congeniality brand of comedy queen (A la Katya or Dela), we can’t quite squeeze her into the box in our brains that we put funny queens into. She’s something entirely her own – funny, dramatic, classic, elegant, country – and that might be why I love Kennedy so much. I struggle to think of any queen we can really compare her to. Chi Chi has a confidence crisis, and my heart really goes out to her. As much as I want my queens to fight for their places in this competition, I can understand how her genuine feeling that she’s not as good as her peers would make her feel very guilty about staying over any of her sisters. I really hope that the judges and the other queens can uplift her and show her how truly gifted she is. Aja is read for her misunderstanding of the character, leading to a fantastic comparison from Jeffery that she was supposed to be Tai, but she came off more Cher.

Ultimately, it’s Dela (for the third week in a row!) vs Kennedy here, with really only one choice of who should be sent home out of Milk, Chi Chi, and Aja. Though Chi Chi has faltered, I truly don’t believe we’ve hit on her best strengths yet, and she has so much more to show. Especially after tonight’s runway look, I’m excited to see more of how much her drag has evolved since she was the Broke Queen of Season 8. The lip sync is to legendary Lorde track Green Light, and I’m living for every choice Kennedy makes during this, especially her look. She wins (handily, in my opinion) and makes the correct choice to send Milk home. Of the three eliminated, I’m rooting for a Morgan return, but I’ve been very happy with the choices made so far, and am still totally on board for everything All Stars 3 is giving me. Now let the music play!