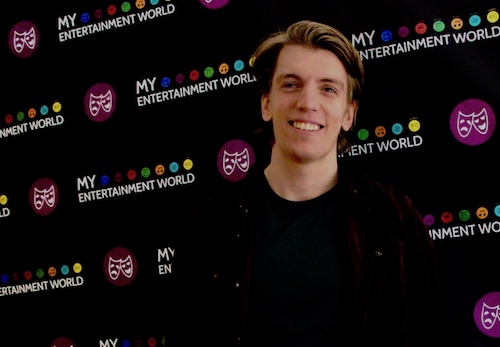 Anyone who follows @MyEntWorld on twitter knows how obsessed I am with @AdrianShepski, the bold, irreverent, unapologetically silly account run by the hilarious Adrian Shepherd-Gawinski. It’s particularly fun, then, to see him in serious theatrical roles like Andrey in Wolf Manor’s Outstanding Production-nominated Three Sisters, a dramatic turn full of nuance and empathy in a play that could not be more classic. Adrian’s memorable performance was Outstanding Actor-worthy even if his dream role remained just out of reach.

Do you remember your first experience with theatre?
I remember the first professional show I ever went to was Joseph and the Amazing Technicolour Dreamcoat. I grew up in northern Ontario, and it was a big family outing, with all of my stepsiblings. There were six kids and two adults, and we had the Donny Osmond album. And I knew, and still know, all the colours by heart, and so it was this big, fun, “We’re gonna see it for real, on a stage!”

We last interviewed you for Romeo and (Her) Juliet. Catch us up on some of the highlights since then.
I’ve kept acting. I got to do a show with Buddies [in Bad Times Theatre], which was a lot of fun for me. Really exciting. I got to play a superhero, which was cool. In addition to acting, I’ve been designing sound, and composing music, which is a lot of fun. That’s happened randomly, but it’s become this great second stream of creative work for me, which is a lot of fun. I’ve been doing it for two years maybe, and it’s just now starting to pick up steam, where I’m starting to see money come in for that, and people are starting to hire me because they know I’m good at it. I kind of have two jobs now.

How did you get involved with Three Sisters?
A friend of mine forwarded me the casting notice, because I have always said – and still say – that my dream role in theatre is Olga in Three Sisters. I think that’s such a great role, and I identify with her very deeply, and so I heard there was this gender-blind production of Three Sisters. So I wrote them, and I said, “I really wanna play Olga. Can I audition?” So I auditioned with Portia from Julius Caesar. And they called me back for Andrey. They did not even consider me for Olga.

But Dana [Puddicombe] was such a good Olga. She’s so beautiful, and I really enjoyed playing Andrey, so it was a lot of fun. I was attracted to the show. I really loved that play. It’s a beautiful piece of writing in any case. And I hope this isn’t kissing up, but I really enjoyed what you wrote about it, because for me, it is a play that really speaks to what’s going on now. Like a generation of young people who find that they must re-invent the way they interact with the world, because the systems that their elders have developed are no longer functional. I find that very relevant, and it really speaks to what’s happening for us. And all that aside, it’s a beautifully written piece of theatre. So I just really wanted to be part of that show, and the idea that it’s created by artists who are really actively creating space for queer voices, and female voices, and diversity. That’s just a fun space to work in, period. So [I was attracted to] the play and the production, and I was lucky enough to have a pretty good role in it, also.

How did you go about developing the particular sibling chemistry with Dana, Arinea Hermans and Christina Fox as your sisters?
I think a lot of that was just casting. Mallory [Fisher] did a great job of populating those roles because we just showed up day one, and it was already there, which was a lot of fun. And even my secret jealousy that I didn’t get to be Olga sort of works, because Andrey and Olga have this conflict as to who’s the true head of the household. They were so much fun to work with, and our ages all stack up exactly as the ages of those characters do. There was actually no work to it.

And how do you think Andrey’s arc is changed, doing it in 2017 versus when it was written in 1900?
I don’t think it has changed, because I think that the condition of the world now is similar to the condition of the world then. If anything, I would say that to play it in 2017, it just doesn’t feel like a history piece any more, even though it’s very rooted in its own period. I think the conditions of the world are such that to play it now is exactly the same as to play it then, in that he is caught between generations. A revolution is coming, but he’s not ready to be a part of it. I think that’s all exactly the same now as it was then.

Andrey’s relationship with Natasha is really complicated. Tell us a little bit about working with Niki Nikita to develop that.
Niki Nikita is so fabulous, and that’s another example of perfect casting and casting doing all the work for you. Mallory really picked carefully which of the roles she wanted to gender-flip, and I think it was really smart to choose that one. Niki, just by virtue of being this non-binary visibly queer presence, is sort of revolutionary in this world, and that’s what Natasha represents in the world of Three Sisters. The winds have changed. The family aren’t ready to accept. So it was really beautiful to play Andrey, who sort of craves that and loves it, but can’t maybe grow enough. It ultimately doesn’t make him happy, to his detriment.

What were some of the interesting conversations you had with Mallory in developing your interpretation of Andrey?
Mallory was very receptive. She would say, “Go do your homework,” and then listen to what we had to say about our character, and then say, “Great. Now let’s see it onstage.” My big thought about the family is that this is a conservative family. They are old money, and as with a lot of old money families, they are really attached to the old ways of thinking. So what I feel about Andrey is that he has all of the skills to succeed a generation ago- he’s a really talented musician, he is a great academic- but he is not able to adapt to a change in the world, and that makes him miserable. And all of his own attempts to adapt end up making him feel ashamed, because he still feels this allegiance to the old way of the world.

What were you hoping audiences would take away from the production?
I think it’s a beautiful piece of theatre that really gets at the heart of what you might call millennial ennui. I think that young people who refuse to play by the established rules are easy to dismiss, and this is a great piece of theatre to encourage empathy for people who don’t play by the rules. I think it’s a play that lets you see into the heart of other young people.

Did you have a favourite moment in the production?
Yeah, I talked about this with Dana. She was just so good as Olga. I have a bit in Act 3 where I’m offstage for the whole thing – this is when they’re all in the bedroom when there’s a fire going on, in the town. And I’m offstage for the whole thing, except I come on right at the very end and yell at my sisters for a page. And Dana was so good, and it was one of those moments where I have to remind myself that I’m not an audience member, that I have to act, because I got this head-on close-up of Dana Puddicombe just doing, like, the best dramatic acting. Just seeing her heart break over her disappointment in her brother was my favourite thing. And the hardest thing about it was that I had to keep acting, instead of just admiring her.

So what are you up to now, or next?
I have a gig in Port Dover coming up. Norm Foster, called the Screwball Comedy. We’re doing it in Orangeville, in the spring, and Port Dover in the summer, which should be fun.

A friend of mine, Jesse Lavercombe [and I] are also working with Yes Theatre, which is a company in Sudbury, to develop a new musical. They were looking for new creators. So we’re at the very beginning development stages of a musical about a young person with a stutter. That’s all we have so far, but we’re feeling out what that story could be, and what are the themes of this musical, what kind of story did we want to tell.

Did you used to have a stutter?
My friend Jesse did. We’re really interested in exploring ideas of communication, and loneliness, and all of that. We’re really excited about developing it.

And do you have anything you’d like to add?
I’m so excited to be at this party. I think this is a really exciting time for the Toronto theatre community. It feels like a paradigm is shifting – I guess I’m talking about Soulpepper stuff. It feels like the way we talk about our community and the values we have as a community are evolving really dramatically. And I’m really excited to be coming to a party with a big cross-section of the theatre community from the biggest to the smallest, and to be representing the show that I feel embodies the values of the future.