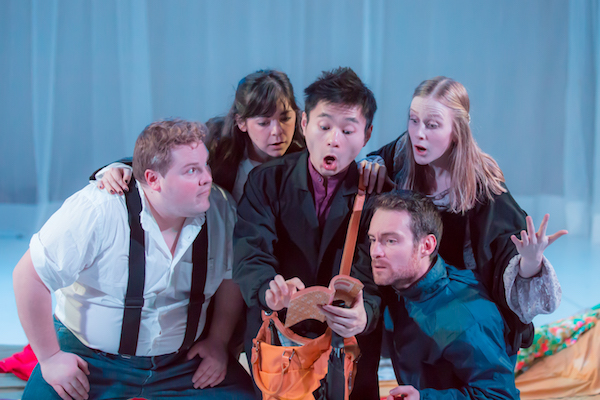 The Chekhov Collective’s Midsummer Night’s Dream is a delightfully entertaining escape from the brutal winter weather into a different kind of natural disorder, and while fairly brief (running time is 2 hours), is rarely tedious.

Elizabeth Saunders is charming as Puck, drawing me completely into the story every time she was onstage. Her fawning, obsequious approach to Oberon is often very funny, and she puts her physical comedy prowess to work in a way that is delightfully quirky and nuanced.

The cast overall is strong – there was a lot of doubling up – the lovers also play the mechanicals, the actors who play Theseus and Hippolyta double as Oberon and Titania – and while some of these are traditional, some are the result of some cuts made to the text itself (to my dismay, the fairies are left out of the Titania-Bottom scenes, though the choice is consistent and economical). One criticism I almost mention reluctantly is that some background reactions of the cast throughout the production are so on point and hilarious that they distract from the main action.

Zach Counsil, who plays Bottom, does a remarkable job of balancing the somewhat contradictory qualities of joviality and authoritarianism present in the not-quite-official leader of the mechanicals. The character is, arguably, the most important in the play since he’s the only one who manages to traverse both the ‘civilized’ world, and the land of the fairies. I only wanted a few more moments of vulnerable authenticity from him to really bring out the full meaning of the humour.

One significant change is that instead of the usual beginning featuring Theseus and Hippolyta, one of the actors plays an extra-textual character. It wasn’t clear to me what the context was supposed to be or what this was meant to achieve. It didn’t help that Natasha Greenblatt’s delivery was accompanied by wishy-washy hand gestures and a general lack of intention, and so the meaning of the words is easily lost. The choice falls flat to me, and while it’s unclear if that was a result of the acting or the direction, it left a mild tarnish on my overall enjoyment of the show.

Finally, I’d be remiss not to mention that Shannon Lea Doyle’s set design is gorgeous: the set is stark to begin with, with a couple of chairs framing the space, leaving Noah Feaver’s simple lighting design to set the tone. Demarcating the forest is a technicoloured and multi-textured carpet that emerges from a side door, offering dimension, cover, and colour to contrast with the stark whiteness of Athens and ‘ordered’ civilization, and to the world outside the doors of the theatre.