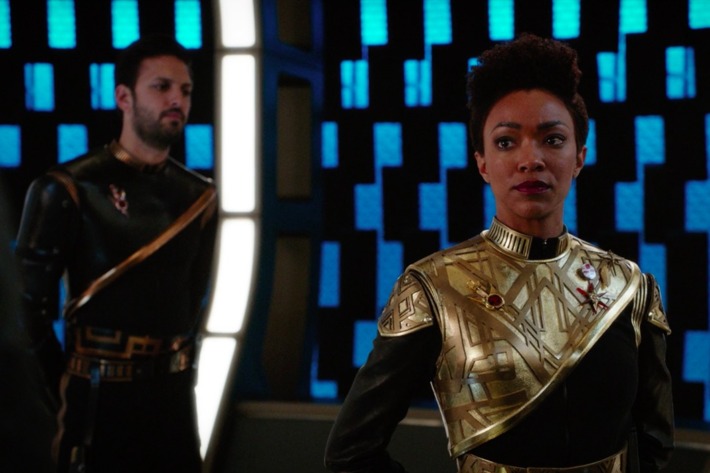 Star Trek Discovery, Ep 10: ‘Despite Yourself’

Star Trek: Discovery returns with a bang, but also an uncharacteristic sense of confidence and playfulness (which may well be due to the return of Jonathan ‘Riker’ Frakes to the directors’ chair) but also, unfortunately, this otherwise excellent episode evokes one of sci fi’s worst tropes: the result is still a great start to the season, but the big twist is soured by its target.

Summary:
Finding themselves in the famed Mirror Universe, Burnham, Lorca, and Tyler infiltrate the Mirror Shenzhou to steal the location of the USS Defiant, an Original Series-era starship that can help them get home. Meanwhile, Cadet Tilly is, improbably and hilariously, the captain of the Discovery and gets to play at being a bloodthirsty captain. Meanwhile, Tyler is suffering further PTSD flashes all hinting toward his reconstruction, but there is a problem with his re-programming and now the Tyler personality has overridden his Klingon identity (and his Manchurian Candidate key phrase doesn’t unlock his brain the way it was meant to). Stamets remains comatose and muttering vague warnings, which sadly are not understood by Doctor Culbert, who is murdered by Tyler after discovering too much about his Klingon reconstruction. The episode ends on a cliff-hanger, with Burnham in command of the Shenzhou, Lorca in a torture chamber, Tyler realizing he’s a monster, and the evil Discovery flying around in our prime timeline, doubtless causing all sorts of chaos.

As I’d hoped, we now find ourselves in Star Trek’s famed ‘Mirror Universe,’ perhaps most famous for creating the classic ‘evil goatee’ (used so masterfully in Community’s ‘Introduction to Chaos Theory’ episode). The Mirror Universe features a villainous ‘humans first’ Terran Empire that dominates the galaxy through perversions of Starfleet values and evil versions of our heroes. The Original Series spawned it and Deep Space Nine continued the trend and even Enterprise got in on the action, creating a clever connection between TOS episodes ‘The Tholian Web’ and ‘Mirror, Mirror’ (the former being where the USS Enterprise’s sister ship, USS Defiant blinked into an alternate dimension, that the Enterprise episode declared to be the Mirror Universe. The result is that the crew of the Discovery now has a classic era, Constitution-class (like the Enterprise) starship to steal from and help them get back home. It’s a super fun way to connect Discovery into the main mythology and demonstrates that when it wants to, Discovery knows exactly how to play classic Trek and play it well. We get all the fun of rebranding the ship, discovering who our heroes are in the alternate timeline, and everyone gets to play evil. It’s a blast and the most fun I’ve had watching Discovery since the time loop. All the Mirror Universe tropes are here and it’s the first real example we’ve seen of the cast getting to flex their muscle a bit by acting differently (a classic Trek trope that is usually the result of a holodeck adventure or a ‘wacky planet.’ …there are a lot of ‘wacky planets’ in the Trek Universe). Tilly, in particular, nails it in this episode, which is nice to see.

We’re back in comfortable Trek territory here, while still staying true to the mythology of these characters and this crew; the mid-season break did them a real favour here as the time has let the first half of the season sink into my memory a bit more; now when they’re calling back the Shenzhou, I am nostalgic for the time we spent there. I do want to know what Mirror Lorca and Burnham are like – a good sign that these new Trek characters are sticking. It’s a great return to form and I hope the rest of the series is able to maintain this tone and pace.

That being said, there’s the murder of Dr. Culber, which is a bit of an issue. Discovery received well-earned praise for including the first openly gay couple in Stamets and Culber and while their relationship has gotten good amount of screen-time and has provided useful dramatic conflict with Stamets hiding his symptoms from Culber to continue to operate the spore drive and so in-and-of-itself, Culber’s death isn’t cheap and will certainly have lasting consequences, but it also evokes an unfortunately common sci-fi trope called ‘Bury Your Gays.’

The ‘Bury Your Gays’ trope is fairly far-reaching (as tropes tend to be), but the jist is that queer characters are often denied happy endings or have a higher tendency to die in shows that feature primarily straight characters. While putting all queer characters in a safety bubble is absurd (and it’s own weird form of discrimination), when visibility and representation is still so low, killing one of two gay characters on a show is a big deal. There’s already been a suggestion (from Wilson Cruz, who plays Culber) that we haven’t seen the last of the character (I’m guessing evil Mirror Culber who has shaved his goatee. WHAT A TWIST!), so there’s certainly more story to be told – and, let’s face it, none of the romantic couplings on Discovery are headed for happy endings (Tyler and Burnham…yikes. Also Lorca and the Admiral…double yikes) so it’s not as though Stamets and Culber are an exception, but it is disappoint nonetheless to lose him on the show.

This trend isn’t exclusive to sci fi or sexual identity (see, for example, The Walking Dead’s troubling history of introducing a new black character only to kill another one off) and Discovery certainly seems committed to diversity and longform story-telling, so I’m willing to give it a conditional pass for now; but nevertheless, it was an unfortunate smudge on an otherwise impactful twist in a great episode.

As a side note, the powers-that-be at Trek do seem to realize that these characters matter and as such, Discovery’s first comic is focused on Stamets and Culber; how they met and the early days of the relationship. It’s a step to ensuring they continue to remain a vital and visible part of Trek canon, but obviously will not reach as wide an audience as the show itself.

The Economy of Discovery

Ultimately, with the death of Culber and the lightning fast acceleration of Burnham and Tyler’s relationship due to the time loop, I’m constantly forced to remind myself that despite the glacial pace of the pilot episodes, Discovery is only slightly more than half the length of a standard Trek season and only slightly longer than the most seasons of Game of Thrones: as such, things will happen faster and harder in this show. Even writing this, I’m tempted to say ‘the death of Culber so early into the series,’ when in actuality, the season is two-thirds complete. It’s an adjustment, to be sure and one I’m likely to struggle with until I can go back and watch the season top-to-bottom (the cost of watching so many shows on Netflix…) There are still five episodes to go and things are likely only going to move quicker. Buckle up.