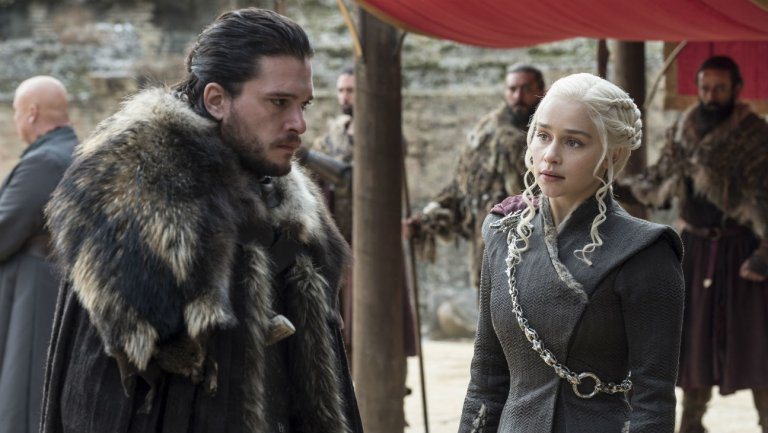 Game of Thrones: “The Dragon and the Wolf”

I can’t think of a better way to start talking about the season seven finale of Game of Thrones than by talking about Daenerys Stormborn. When we first saw her, she was a girl with nothing and everything. In one sense, she had nothing because she had no agency, no chance for self-determination. Daenerys also had nothing because her family was gone, her dynasty destroyed and was forced into following Viserys. She had everything in the sense that she represented potential – potential for power, for others to use that power and dominate. Dany was raised on the run, but was never without creature comforts, thanks to wealthy Illyrio Mopatis. She also had three stone eggs, of immeasurable wealth which, in themselves, represent everything and nothing – the chance for dragons to be reborn or remain absent from the world.

Six seasons later, Daenerys has everything and more. Powerful allies, two armies, two dragons – and she’s finally in Westeros, finally bringing home the threat to her enemies, finally fulfilling her Targaryen destiny. The image is powerful, but it makes sense, too. Jorah has said many times in earlier seasons that he believes in his Khaleesi because she makes the impossible a reality. She cannot be burnt. She is the Mother of Dragons. She killed the khals and took command of the Dothraki horde. Every time she’s been faced with an impossible situation, Dany’s found a way to maneuver around it, or simply blaze and burn her own path through it. She created her own agency, gave herself her own freedom, wrote and satisfied her own prophecies. It’s not as much bildungsroman as it is manifest destiny, but the effect still works and the point is still made – Daenerys represents the potential for change in Game of Thrones, the power of extraordinary people to affect the world.

And then she comes to the armistice, where she meets the person who doesn’t want to change the world, who doesn’t want to redraw the maps. Cersei is very fond of the world she lives in, so much so that she’s painted it onto her floor for her to walk upon at her leisure. Because to her, it’s her world. She has nothing in common with Dany’s storyline – Cersei knew what her powers were when she was born. She grew up feared and she learned to use that to better her position. Now, after so much sacrifice and struggle, she sits on the Iron Throne and has the attitude of the conqueror. But Cersei is facing another conqueror in the Dragonpit, someone who could challenge her, rival her, possibly even outdo her. Both sides enjoy certain advantages over the other – larger armies, home field advantages, different advisers and craftier allies – but Dany is not trying to prove anything about her right to rule. No, the claims being made are about The Great War, the one between the living and the dead that everyone’s been going one about since we first saw the White Walkers.

Just as Jorah said in the opening, dragons have a hard time differing between what’s theirs and what isn’t. Cersei is the same way – she’s more dragonlike than Dany will ever be, when it comes to possessiveness. All of her negotiating with the Starks, Greyjoys and Targaryens is for one purpose and one purpose only. Her alliance is very clearly one of inconvenience, but we can already see her twisting it to suit her needs as she needles at Tyrion, lashes out at Jon, grinds her teeth with Jaime. It’s all an act, designed to deliver the eventual, reluctant alliance. Euron sails for Essos, and will most likely return with the Golden Company. When and where he lands in Westeros can be determined by Cersei, at the moment of her choosing, depending on how the war against the Walkers goes. Cersei is a master of the Great Game, and I for one am proud of HBO for so expertly showing her mastery in this episode. It makes a kind of sense, in the finale, to only have two living dragons fly Dany in to the armistice – after all, it is a meeting between two dragons, one of the East, the other of the West, and both hellbent on their respective purposes.

The Stark drama that the producers worked so hard to cultivate this season came to a head on Sunday, as Sansa’s mock trial for Arya flushed out Petyr Baelish’s crimes and pretty well flushed him out too. The setup may have been awkward at times, with Bran’s arrival and his new bizarre identity, and with the unexpectedly creepy behavior of the formerly-Faceless Man Arya. But I think I finally get what the writers were trying to do. Before, I harped on about the development of a Kings’ Landing mirror in Winterfell, setting up political figures to bandy with and intrigue to gossip about. But the heart of it all is rumor and conspiracy, because the heart of the whole bloody mess was Littlefinger himself. It wasn’t very interesting for so much of the season because Littlefinger’s plans take time to develop, to show themselves for what they are. In season six, when he reveals that he desires to sit on the Iron Throne with Sansa beside him, it’s an image we’ve known about for quite some time, but it’s written as if it were a revelation, a declaration of love for her and for the power.

But where his scheming ends, Sansa’s sensibilities kick in. She makes her pain her power, her suffering her weapon. It’s quite effective, when she turns to Baelish and asks him to answer the charges of murder and treason. You can almost see it coming, as the given setup doesn’t quite follow (who has Arya murdered since coming to Winterfell?), but the payoff is still just as sweet. I’d even argue that watching Littlefinger squirm and try every last trick in the psychopath handbook is more rewarding than Arya’s swift strike with his dagger.

I think, too, what’s rewarding about the moments in the North is watching the transformation of the drama. Without all of the side characters, the background felt very empty, and the lens became too tight on the principal characters. But with the aftermath of the trial, the lens widens and transforms the affair into a deepening of the familial bonds. Yes, Sansa and Arya will never really be friends. But their experiences breed mutual respect for one another – Sansa calls Arya strong, Arya tells Sansa she wouldn’t’ have survived her sister’s ordeals. It’s a great scene, on a lot of levels. It references earlier arguments and episodes where the two fight, about everything from their suffering to their desires. It also forms the lynchpin of the transformation of Baelish’s trial and execution into a message about sisterhood. Sisters fight and protect each other from those who would seek to harm them, or in this case, drive them apart. Cersei’s words come to mind: “What should we do to those who try to tear us apart?” Without being as terrifying as she is, Sansa and Arya find their own way into power, their own way to turn someone who wanted to use them into a new bond between them. I very nearly shed a tear.

After all this, it’s hard to talk about what’s left. The lovely banter between Bronn, Podrick and Tyrion, the ‘heroes of the Blackwater’ was immensely satisfying. And nothing beats the Hound’s semi-bored, semi-threatening facial expressions, except maybe his brotherly hatred of the Mountain. I for one was hoping for more from Brienne, but she behaved like she didn’t belong there, and only really acted out when it looked like Jaime might be the only one to talk Cersei down. But still, her moments with Sandor Clegane were…charming, of a sort.

So, with the dusting of supporting cast members, what’s left to discuss is what comes after. I know, I’ve spent a lot of this season griping about the writing and the pacing and the fact that time and travel don’t really mean anything to a show you’re trying desperately to end in a satisfying manner, but this episode was pretty alright for me. It took an hour and a half to cover all of the points but that’s the fact of it. This armistice had been building up for a while now, as had the Winterfell affair, and in order to address it fully you had to take the time. And if there’s one thing that works well in long-form TV dramas, it’s taking your time. Pacing is everything.

So, what comes after. Bran’s got a whammy to drop on Jon Snow, and it’ll certainly complicate things with his aunt/queen/lover. It’s already gotten complicated for Tyrion, in love with Dany and unable to really do much about it. Jaime’s either going to be with the Lannister forces, and just act honorable until Cersei betrays everyone, or he’s going straight to White Harbor to tell the Dragon Queen about the impending attack. I can’t imagine one of those options being less attractive. The Wall’s been breached and the army of the dead are on the move, and I wonder if we’ll see any new tricks from the White Walkers. G.R.R.M.’s had a lot to say about them, their unique abilities with ice and snow, and the producers have mentioned some of the things they’d like to try with them. All I know is, Tormund had better not be dead/undead.

But this is all going to have to wait for nearly two years, and I’m really hoping that it’s not all cocks in the end (thank you, Jaime and Bronn, for that riveting analysis).