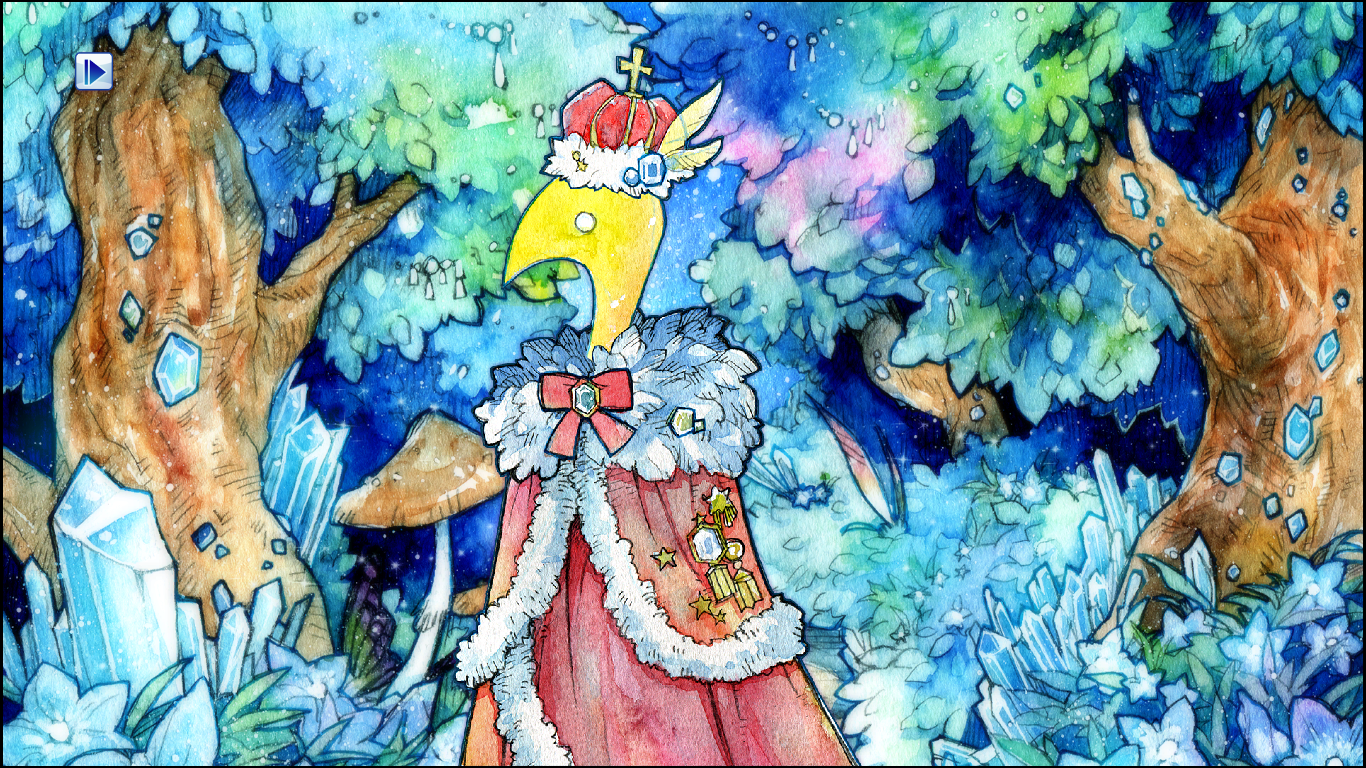 Absurdity abounds in this festive seasonal sequel to Hatoful Boyfriend, the notoriously bizarre pigeon dating sim (yes, you read that correctly). Released in English translation on Steam, PS4, and PS Vita in December 2015, Hatoful Boyfriend: Holiday Star lets you spend the winter holiday season with the familiar birds of St. Pigeonation’s high school along with a few new additions. The resulting wild sleigh ride is a worthy successor to the original game’s unique blend of comedy, parody, and surprisingly heartful — er, heartfelt — drama.

If you don’t have the dubious honor of playing the original game, Hatoful Boyfriend has the player assume the role of Hiyoko Tosaka, the only human girl attending a prestigious high school for birds. It only gets weirder from there. But it knows it — Hatoful Boyfriend is at its best when it revels in its own weirdness. It convinces you to accept its ludicrous premise and then dissects itself, taking equal delight in displaying funny bone and bleeding viscera. Perhaps the only thing more fucked up than the story itself is the fact that you buy into it.

It’s a love letter to the most familiar tropes of the jrpg dating sim world that also mercilessly ridicules them.

Holiday Star carries on in that fine tradition. The sequel is a smaller game which replaces the original’s branching story structure with four sequential episodes. It also has quite a bit of bonus material: a series of short scenes that unlock on completion of each episode, a gallery of screenshots and art from the game, a Q&A where the characters answer letters sent by fans, and a topical pigeon tour of Kyoto (I’m not kidding).

The four main episodes must be played in order. It begins innocently enough: the first episode covering a laughably obvious Christmas caper that escalates so far over the top you can’t help but chuckle along with it. There are new additions like the goofy, cute, unidentified Christmas creatures alongside the familiar mix of birds, conspiracies, and tragic backstories. It reestablishes the tone of classic Hatoful Boyfriend very well.

The second episode progresses to a modern Japanese spin on winter festivities: Comiket, an enormous self-published comic fair which takes place at the end of December. This episode takes its parody to a meta level with a loving evisceration of manga and otaku culture — the very same audience most likely to enjoy Hatoful Boyfriend. It also introduces a new character, a villain whose moustache-twirling scheming and obsession with revenge is exaggerated to the point of becoming ridiculous, but that’s the point. Look, if you aren’t prepared for it to be hokey and weird then why are you playing a pigeon dating sim?

While this new character was fun, I ultimately felt that he didn’t live up to his full potential. The odds aren’t in his favor, though. Each character in the world of Hatoful Boyfriend is a caricature of a certain character archetype — the earnest childhood best friend, the high society snob with a heart of gold, the mysterious one who seems to be a womanizer but only has eyes for the main character… and the villain. Arguably, this new character is just a less successful knock-off of the original villain. To be fair, “constantly-thwarted wannabe villain” actually is an anime archetype, and he performs that role to great entertainment value. Still, I was hoping for more payoff from his conflict with the original villain.

At first glance, the third episode seems to break from the holiday theme. It begins with a lunar eclipse viewing, but soon transitions into a fantasy world where it is always a holiday. The outstanding, playful art in this episode suited the dream or fairy tale motif, which also played well with the featured character. This episode was fun and cute while still maintaining a delicate balance with the game’s darker undertones. As one character says, there is a “long tradition of the macabre in fairy tales.” Though the plot dragged at a few moments, this episode made up for it in strong character moments that hearkened back to elements of the first game that I had felt were missing up to this point.

Much like the secret final route of the first game, the fourth and final episode takes the delicate balance between goofy and disturbing and veers hard into fucked-up territory. The stakes escalate dramatically, putting the characters in both physical and metaphysical peril — a far cry from the first episode’s Christmas tree mishaps. The plot setup created an interesting way to test and explore each character individually, with results ranging from intriguing character development to sheer hilarity. It frames these trials with a picture book motif which fits well into the aesthetic established in the third episode.

The climactic confrontation gets quite dark, though no more disturbing than the original game. It explores a range of emotional topics, from loneliness and the fear of being hurt in relationships with others to how that fear can stop a person from living life fully. This sequence is surprisingly moving, though I felt it briefly crossed into melodrama unintentionally. The melodrama during the climactic battle, on the other hand, is entirely intentional. The soundtrack makes this epic battle glorious, hilarious, and gloriously hilarious. It wraps up with a sweet ending that folds back into the original game’s narrative nicely.

Again, the final episode may at first glance seem to break from the holiday theme, but it actually expands it beyond the constraints of winter holiday festivities — just as Hatoful Boyfriend‘s final route shatters the constraints of a dating sim. It tears away the wrapping and cuts to the core of what the holidays really mean to us. They’re an exercise in fantasy and escapism, a way to bundle ourselves up in tradition and insulate ourselves from the frightening change that real life inevitably brings. In true Hatoful Boyfriend fashion, it’s both hilarious and oddly moving to see a bunch of birds grapple with that reality.

But, hey, at the end of the day, it’s still a pigeon dating sim. It is as ridiculous and hilarious as you expect, and then some.

Holiday Star‘s shorter length and episodic structure make for pretty much linear gameplay. There is no plot branching, just a few non-plot-related scenes that stem from dialogue options. The only other variation is wrong choices that result in character death, so make use of the game’s save system (especially in the significantly longer and more perilous fourth episode). Though the game covers the same tonal range from wacky to disturbing, the condensed structure means you don’t have to hunt to uncover the seedy underbelly of St. Pigeonation’s, which I missed.

The game is chock-full of Japanese pop culture references, which makes sense for a game designed as a send-up of the jrpg and dating sim genres, but these references will be hit or miss depending on how well-versed the player is in that world. Many westerners will likely recognize the ubiquitous references to the Phoenix Wright: Ace Attorney games. References to the novel and film The Murder of the Inugami Clan, probably less so. Though some references didn’t cross translational lines as well as others, none of them were crucial to understanding what’s happening.

Highlights of the bonus features include a mini-episode where the player can spend New Year’s with each character. The New Year’s scenes essentially showcase the same character beats as each character’s story in the original game. They also give the option of seeing new art for each character represented as a human with winter outfits and changing facial expressions. Or you can just stick with, to quote from the game, “Bird lovin’ with birds.” There’s also a funny mini-episode where goth bird’s mom makes a guest appearance.

Yes, but not as much. There are references to the original game throughout, though the first two episodes don’t spoil anything big. Those who have completed the original game will pick up on a fewthings in the final episode that new players won’t. While these aren’t essential to understanding what’s going on, they make the game more interesting and answer a few questions. The game does a good job of reintroducing familiar characters in a way that will refresh returning players’ memories and still be accessible to new players. Still, if Holiday Star sounds like your cup of tea, you would probably do just as well to start off with Hatoful Boyfriend.

The final verdict? Holiday Star is a quality blend of the old and the new, and it upholds the same kind of experience as the original game. If you enjoyed Hatoful Boyfriend — or you’re somebody who likes absurd humor, twisted stories, and Japanese pop culture — Holiday Star delivers.