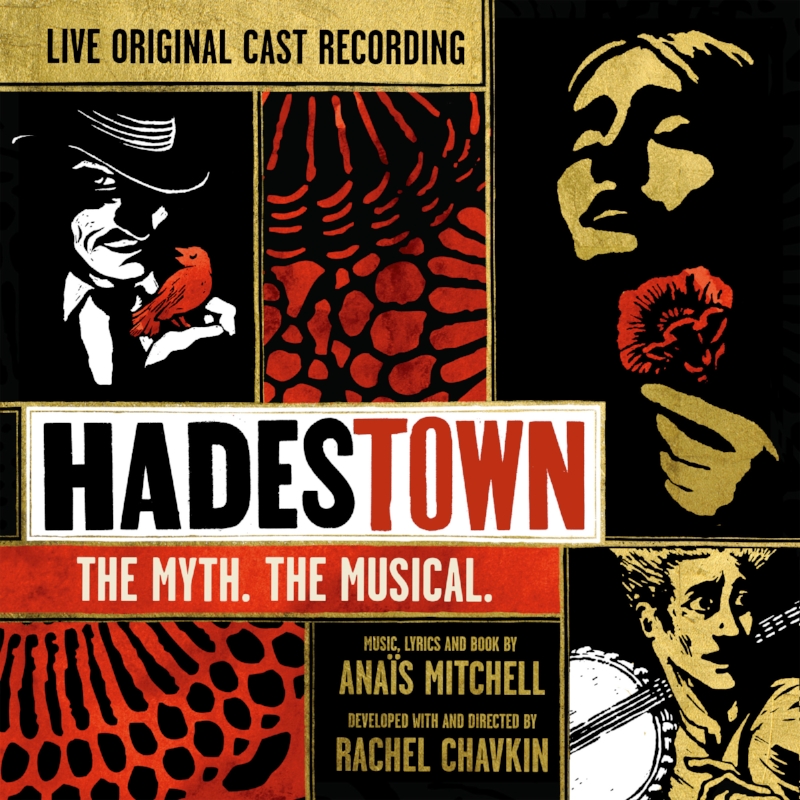 As of 2017, there are two recordings of Hadestown, a folk musical take on Greek mythology: a 2010 concept album, and a recording of the off-Broadway cast who performed the show at the New York Theatre Workshop. (The MyTheatre Award-winning NYTW run was in 2016, but the cast recording wasn’t released until this year).

Hadestown tells the story of Orpheus and Eurydice, but it’s also very much about Persephone and Hades. For those unfamiliar with the Orpheus myth, Orpheus is a young musician, married to and in love with Eurydice. When she dies, he journeys to the underworld to ask Hades to return her to him and the world of the living. It’s a myth that has captured imaginations for thousands of years.

Of the two recordings, the 2010 concept album better captures the folksiness of the story. It’s a more stripped down version of the show and the simplicity of the instrumentals makes it feel connected to the generations of oral tradition that allowed the myth to survive in the first place. You can imagine it being performed as a folk tale around a campfire somewhere. The 2017 recording is musical theater. Folksy musical theater, yes, but undeniably theatrical.

Both versions are brilliant in their own right, it just depends on what you’re in the mood for. Do you want to enter a timeless, dreamy realm of storytelling? Or do you want to listen to a musical that wears its heart on its sleeve? There is a melancholy wistfulness to the concept album that makes you want to sit down as you contemplate its poetry, whereas the cast recording goes on a dramatic journey and expects the audience to come along too – you can contemplate the lyrics’ poetry on the road to Hell, now let’s go.

Of the two, I’ve admittedly listened to the cast recording more. Something about Chris Sullivan as Hermes, who narrates the show, sucks you in. Damon Daunno is an earnest and effective Orpheus. And there is a hypnotizing alchemy how the Fates (Lulu Fall, Jessie Shelton, and Shania Taub) voices come together.

The cast recording features new songs, and in particular expands Persephone and Hades’ relationship, giving it more depth and history. Patrick Page is both frightening and vulnerable as the king of the underworld. Amber Gray is divine as Persephone, exuding charisma, sexiness, rage, and sadness. (Gray, last seen as Helene in Natasha, Pierre, and the Great Comet of 1812 – RIP – undoubtedly has a knack for playing unhappy wives, but I hope she can do like a romcom or something happy in the near future? She deserves that). The new songs provide a little more context about the Underworld and how it operates, giving depth to the characters.

The cast recording is however missing some important songs from the concept album. One of these songs is “How Long” and is omission makes Persephone and Hades’s resolution feel less organic than in the concept album. “Wedding Song” is also missing, and is important to Orpheus and Eurydice’s relationship (and alluded to in “Promises”). Some internet sleuthing tells me there are more songs that were in the off-Broadway run (including “How Long” and “Wedding Song”) that for whatever reason were left off this recording. The record is overall, still spectacular, but it makes you wonder if it would be even richer with those missing songs.

In the end, Hadestown is a gorgeous and moving take on timeless mythical characters, and there are two versions of it to immerse yourself in. (You don’t have to listen to one to appreciate the other, but they’re both wonderful and worth listening to in their own right). Hadestown is for people who love musicals, music, folk stories, mythology, folkish takes on musicals, and masterful storytelling.