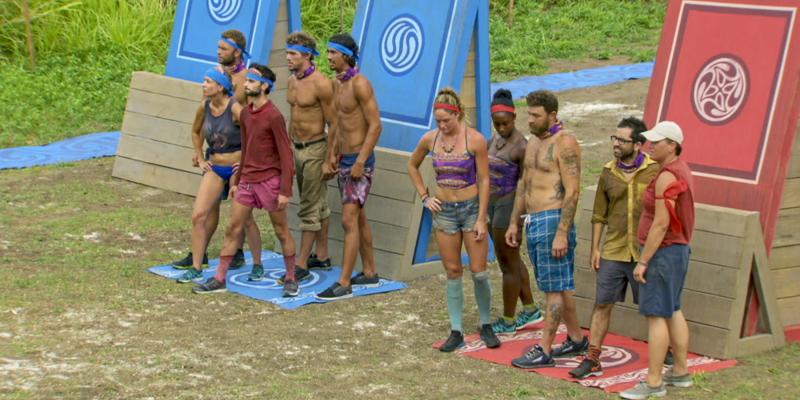 Welcome back to another frustrating episode of Survivor: HHH, which I believe stands for “Holy Heck, How Did the Editors Think This Episode was Well Put-Together? But more on that at the vote-out. For now, we start with Lauren finding the hidden-in-the-nails “advantage” that was hinted at last week, which turns out to be not so much of an advantage, though Lauren doesn’t seem to pick up on that. This one allows her to opt not to vote at tribal, and instead save her vote so she can vote twice in the future. I feel like this can only lead to trouble. All of the votes happen to be read at this tribal, and obviously people are going to know that someone abstained. At this point, she’s in the majority by a landslide, and even though the finger won’t necessarily be pointed at her, there’s no reason to sow this type of distrust in the group. She’s not currently a target, but if Ben ever finds any reason to turn on her (perhaps to get the fairly large target off of himself), she automatically becomes one. I like the idea of production baiting the players into using these twists that might ultimately hurt their game, but I hope Lauren put more thought into this than we were shown and she has a plan down the line that goes beyond “I found this cool thing, I must use it!”

The reward challenge is played in teams, and Cole, Chrissy, Ryan, Joe, Devon, and JP end up getting a big spaghetti feast. The twist is that Joe, who was drawn randomly to go on the reward rather than playing for it, gets to decide the order in which everyone will individually eat, so the people at the end could be left with nothing. Everyone is very fair and it doesn’t actually end up playing out that no one gets to eat, but Cole is the first to discover that there is a clue to a hidden immunity idol on the plate underneath the spaghetti. Being the brilliant mastermind he is, he covers the plate with a napkin, because it’s not suspicious at all for spaghetti to be on top of a napkin. Chrissy is onto something and discovers the plate, knowing that Ryan is going immediately after her. Ryan discards the plate in the woods, and the stage is set for all hell to break loose back at camp, and break loose it does.

While Cole is taking an inopportune pee break, Ryan hustles his way to the tribe flag and snatches the idol. He asks Chrissy to cover up the hole he dug, which Cole spots. He sprints across camp and basically tackles a woman 20 years his senior, causing half the tribe to dog pile on top of them searching for an idol that is already in Ryan’s shorts, a place no one wants to dig. Everyone suspects Cole has the idol, which he reads as a bad thing, but given that his target couldn’t be any bigger as is, it could really only help him that people suspect he has an idol which will force them to split the votes on him moving forward. Of course, Cole wins immunity, so the hero/hustler alliance is going to split the votes on Joe and Desi, fearing Joe has an idol.

Most of pre-tribal is spent dwelling on how much everyone hates Joe. Ben overhears him trying to convince Ryan to vote for Ben since he’s a threat, which Ryan correctly believes it’s way too early for. When confronted by Ben, Joe attempts to spread the lie that Ben has sworn on the marines and broken those promises. Using a man’s military background against him, falsely, does not make for very fun TV, and I’m glad everyone on the island finds Joe as repulsive as I do at this point. Ben tells us, straight up, “I just really don’t like that guy.”

Lauren tells Ben of her advantage, but Ben is wary, knowing that if Lauren uses it, the healers could unify and carry the day over the split vote. The frustrating thing is that this actually could have happened if Desi didn’t throw a hinky vote, but Desi did not have the heart to turn on her alliance and vote for Joe. I am very sad for her. Tribal is spent mostly continuing to bury Joe, with Chrissy exclaiming “none of us wanna listen to you anymore!” which certainly speaks for me as well.

The votes come up a tie, and everyone must either vote for Joe or Desi. In a predictably unpredictable fashion, Desi goes home, and I am officially fed up with the “audience blindside” edits. Many of us knew it would be Desi, simply because she has been invisible this entire game. But to spend the whole episode on how much everyone can’t stand Joe, rather than illuminating anything about Desi as a character and why people voted for her over Joe, is identical to the frustrating narrative of the Ali boot episode, where all of the time was dedicated to the arrogance of JP, only to have him stick around. The problem is not that there is no reason for these women to go home, we know that Desi is a social and physical threat, and we knew that Ryan could not move forward with Ali. The problem is that these women are not entitled to their own stories, that their exits are the story not of how they were eliminated, but how a man survived. We ultimately don’t know why it was Desi over Joe. We can infer that she’s a jury threat and he’s not, that she can win immunities and he can’t, but the fact that we must infer shows a breakdown in the storytelling. We started this season with 9 women and now we have three. Six of the remaining contestants are white men, and those are predominantly the stories we have seen told this season. I have praised the editors for balancing character with strategy this season, but to completely bury a woman’s arc in favor of the loud, obnoxious man who has already had tons of air time is simply exhausting.

On one last note: Four women have now been eliminated in a row, the last two were due predominantly to their association with a threatening man. Jessica and Desi were both the tightest alliance of a giant male threat, but that male threat was not targeted for fear of an idol. The truth is that this fear is not misdirected. In the history of Survivor, women have found idols 16/80 times (thanks to Jeff Pitman for this stat). Probability-wise, men are much more likely to find idols. This represents a huge problem – men have a certain layer of protection simply from the knowledge that they are more likely to have them. I don’t know what the solution for this is, but it’s a maddening element of the game that disadvantages women to the point where four go out in a row for reasons that are not well-explained by the edit, and wind up bewildering and bitter for many viewers. I am keeping hope alive that this season will turn itself around, but I am quickly running out of enthusiasm for the remaining cast members. However frustrating, Survivor is still my favorite show on television and second place isn’t close, so I am still looking forward to what next week has to bring. See you then!