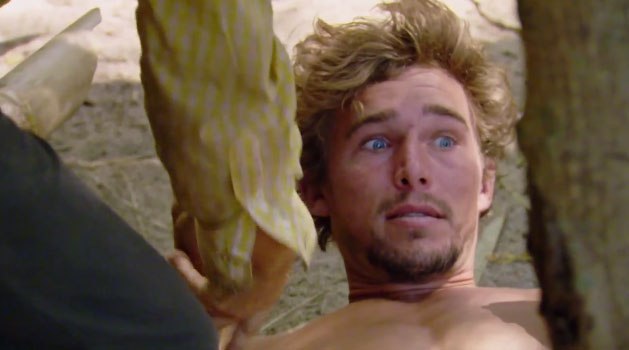 Welcome back to Survivor, where this week we had the first true audience #blindside of the season. I’m not one to read too far into the edit to predict who’s going home, but the combination of JP’s almost incredible lack of personality, boasting about his challenge prowess, and less-than-impressed confessionals from his fellow tribemates convinced me that this was going to be an easy vote going into tribal. Unfortunately for me and the rest of the viewing audience, JP gets to stick around and we lose Ali, a person who, if not a great player, was at least a person who was playing Survivor, unlike JP.

At the top of the episode, Ali was fuming at Ryan after he betrayed her by not letting her in on the Roark vote, blindsiding her. I’ve mentioned before that Ali makes decisions that great players would not make, specifically entry-level reasoning like voting someone out very close to the merge because of their challenge performance. This blow-up was another example of that. If you are blindsided by a vote by a close ally, it means you are probably at the bottom, and lashing out at the people on the top is not the wisest move if you ever want that relationship to be open to salvaging again. That said, I cannot blame Ali in the slightest for yelling at Ryan. The way that he talks down to her, shouts and then denies getting angry, blames her for his betrayal, and generally refuses to accept any culpability, even in confessional, is maddening. I would cry trying to have a conversation with this type of person. To top it all off, Ryan tells us at home that Ali’s reaction was “a bad look” for her, when in my eyes it was Ryan that came off horribly unlikable in this scene (and, let’s face it, in general). I have been down on Ryan since the very, very beginning of this season, but his incessant bragging about his social game despite demonstrating zero evidence of actually having one, and instead showing a stunning lack of self-awareness is endlessly frustrating to me, and I hope to see him get some comeuppance very soon.

Over on the red tribe, we’re shown some pretty heavy-handed character work. Dr. Mike = good, hardworking, fun. Cole = bad, greedy, selfish. Cole talks down to Lauren for bringing up that he’s eating more than his share of food, and then tells us in confessional that he’s not getting enough food and “it’s stupid.” It doesn’t shock me that Cole acts like a 2-year-old because I imagine men who look like him are not used to not immediately getting what they want. He follows up this performance with a fainting spell, enabling him to get more than his share of food as the tribe worries about him. I don’t want to get too controversial here, and I could totally accept that all human bodies are different and maybe this was a completely real health crisis, but I am what some might consider an expert on fainting based on my wealth of experience with it, and I’m not sure this wasn’t at least a little exaggerated. We saw the moment play out, and he lost no color in his face, and I find it suspicious that all episode he’s openly whining about not getting his share of food, then when he is offered more food all of a sudden decides to be all self-sacrificing saying that he doesn’t want the extra food and that he’s fine. This seemed like a desperate ploy, and not a strategic one at that, since his tribemates now consider him annoying and also sick, a liability both at camp and in the challenges. To follow up all of this Cole-burying, he has the exact same confessional as JP about how his tribe would be nothing without him and they could never win a challenge if it weren’t for him. Eye roll.

The reward challenge is for some Survivor pizza which looks, as per usual, very disgusting. The yellow tribe wins, which I’m happy about because at this point I’m all in on Chrissy and hoping this reward comes with some sort of advantage for her, but of course it doesn’t and all this challenge does is instil me with false hope that this tribe can actually win the immunity challenge, which alas they do not.

At blue beach, Devon and Ashley discuss trying to get Desi to flip against Joe, a reasonable possibility given that Desi is appropriately wary of Joe. Since this flip won’t come into play on this tribe, I’m hoping that this discussion is laying some groundwork for Desi working against Joe come merge time. However, Joe finds another clue, and is able to secure the idol. It speaks poorly to Joe that he had to work this hard and didn’t immediately think to check for the idol in the exact same place it was on his other tribe. Remember, this is the guy who would have never found the idol if Cole didn’t for some reason spoon-feed him the information. In my eyes, it doesn’t reflect well on Joe’s intelligence that Jessica was able to put this together much, much faster than he did.

As mentioned, yellow tribe loses the immunity challenge and it’s a decision for Ryan and Chrissy to make between sending home JP or Ali. Ali does a poor job of pitching herself to Chrissy by advertising all of the connections she has to other people when the merge comes. I enjoy Chrissy being candid with her about how the current group on this beach doesn’t matter to her come merge time, since they’ll have so many other options. It always bothers me on swapped tribes when people pretend that just because they’re wearing the same colored buff at this moment, that’s their alliance going into the merge. It’s so transparent and no one buys it and it just seems like a waste of time, so Chrissy’s honesty in that regard is refreshing. Ryan tells us that he doesn’t understand why everyone wants to work with him, which is the first thing out of his mouth that I’ve totally agreed with all season.

I was so sure that JP was going home at this tribal council that I was barely paying attention to the rhetoric at tribal, considering it all just smoke and mirrors. Perhaps I was buying too much into the live-tweeting on my timeline, all of which seemed certain it was going to be JP, but regardless, this was a true shock to me. Ali was not the most strategic, but she was playing hard and she was passionate about her game. She was someone I believed had a legitimate shot at winning, and I’m truly sad to see her go. However, next week is merge time and the possibilities are endless. See you then!