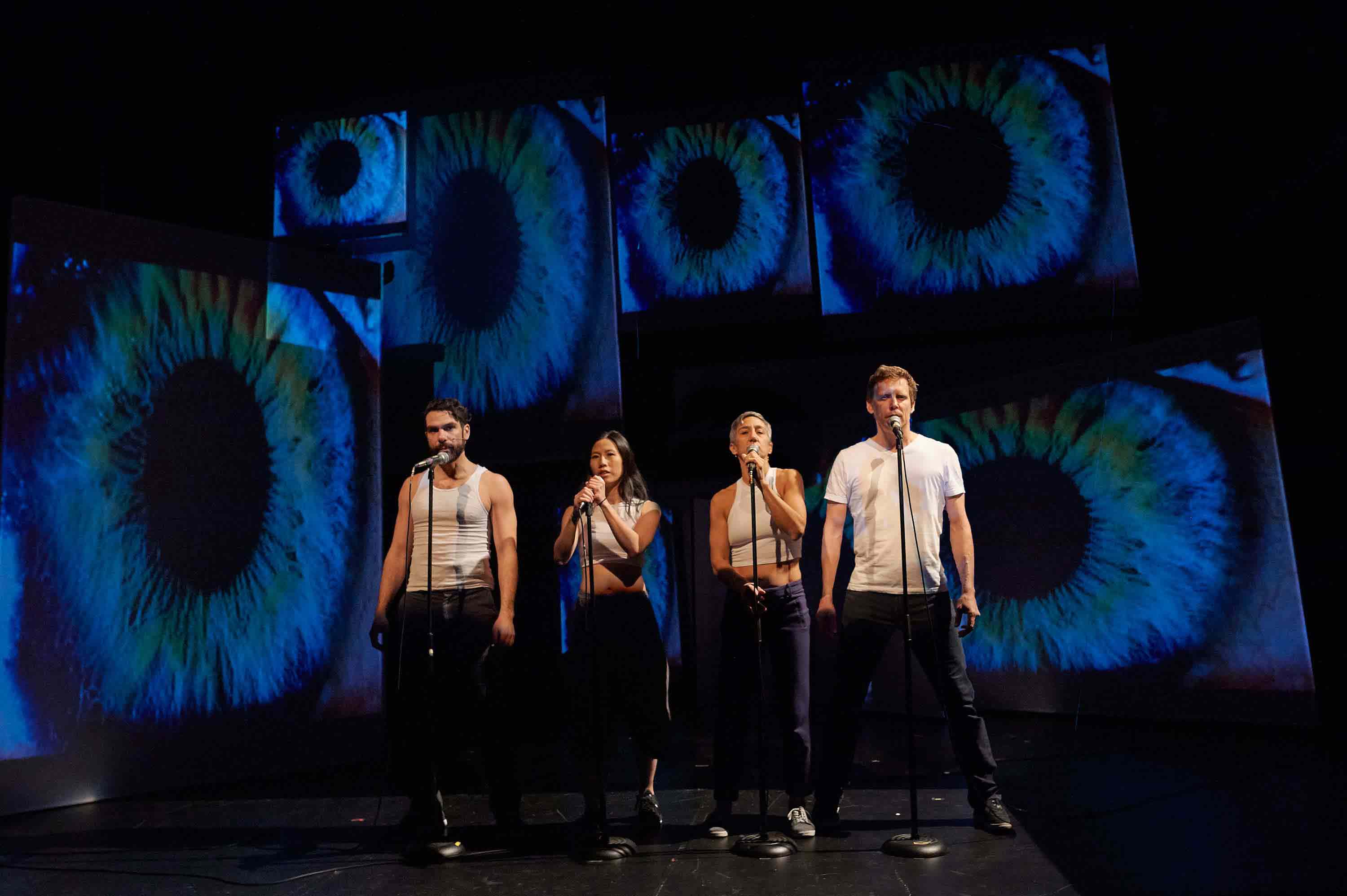 Reflector, the newest production by Theatre Gargantua at Theatre Passe Muraille, is a carnival. Prepare for your senses to be thrilled with slam poetry, dance, projections, circus lifts, technology and text. And then add in mental health, photography, neuroscience, ethics, and the collective consciousness as subject matter. It is a smorgasbord for the senses and the mind.

Playwright Michael Spence was inspired by a 2015 picture of a dead 3-year-old Syrian boy and used that as a jumping board. One photo caused the global village to unite, immigration policies to change, and ignited a conversation about crisis and global apathy. The storyline follows three individuals suffering from mental health issues: a photographer (Michael Spence) who’s lost his sight, a woman (Michelle Polak) who remembers everything, and a social media socialite (Louisa Zhu). These three, all suffering from different neurological conditions, are tied together by their shared psychiatrist (Abraham Asto) but also by their complicated relationship to a photo of a young girl dying in a war zone. Their reaction to this photo—whether they took it or remember it or hallucinated that they experienced it first hand—is the driving force of the narrative.

The story is heightened by an onslaught of magnificent projections created by Laird MacDonald. Using portable screens, the cast manipulates the set in excellently complex choreography. The innovation continues with a tablet dance by Louisa Zhu, Michelle Polak being used as a machine gun, and wonderful work with shadows. Perhaps my favourite part was when Abraham Asto, the psychiatrist, tells his story, heartwrenchingly comparing the deceit of magic to his love of factual science. And while this is all happening, the three other cast members are dressed as him, functioning as his subconscious, showcasing the psychiatrist’s vulnerability, curiosity, and humanity full of flaws and hopes.

However, like a carnival, by the middle of the show it becomes apparent that the performance is all spectacle and flash. When dealing with subject matter like mental health, collective consciousness and ethics, the storytelling needs to progress past the superficial. The production never delves particularly deeply into the complexity of these issues and the connection between the characters, which, for the most part, happens within the doctor’s clinic, is intentionally cold, in contrast to the animated monologues that break the fourth wall. The structure is deliberate but it makes it harder to emotionally connect with the characters. Initially, this is offset by the monologues. Breaking the fourth wall is something that I unabashedly love and, for the first half, the practice is really effective, until the introspective monologues became lectures. This is especially noticeable in the finale when the photographer steps on his soapbox and aggressively lectures the audience. The conclusion is spoon fed to audience, leaving very little wiggle room for independent conclusions. In addition to being heavy handed, the finale lecture at the performance I attended was difficult to hear and, at times, comprehend.

When I left the theatre, I craved satisfaction and redemption for what was presented to me. The show did make me think and caused the cranks in my head to question identity, connection, and the powerful influences of mental health. But the lively lights, innovative performance techniques, and use of technology couldn’t compensate for the lack of substance and the desire for deeper exploration.