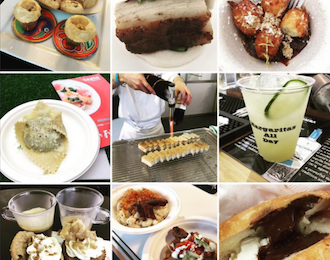 I can’t stay awake at the theatre if I don’t eat first but it’s sometimes hard to figure out where to go, especially if you’re not super familiar with the area the theatre is in. So I headed to Taste of Toronto over the summer to get the lay of the local culinary land and came up with a nearby restaurant recommendation for all the major theatres in the city. I know, my job is so hard.

A seven-minute walk along Queens Quay is all that separates the multi-venue waterfront arts complex and the best sushi I’ve ever tasted. Specializing in flame-seared sushi, Miku was the dark horse standout of Taste of Toronto when the sight of a chef taking a blowtorch to their Aburi Sushi Duo (Salmon and Ebi Oshi) diverted us from our plan to order arancini at the booth next door.

There are four different Momofuku offerings in their University Avenue location but the upper levels are the sort of restaurant experience you want to dedicate an entire evening for. If you’re headed to the opera or ballet, the faster, slightly more casual, ground floor Noodle Bar is my favourite. Stop by for a bowl of ramen, a family-style platter of fried chicken, or their signature pork bun- a dish so good that you wouldn’t be too far off if you accused me of going to Taste of Toronto entirely to find that pork bun.

This pizza-focused Italian joint is the perfect mixture of casual with a sense of occasion. You’ll fit in best if you’re not overdressed but the place feels special somehow, maybe because the food is impossibly good and the dishes sophisticated (my favourite is the pizza bianca with homemade sausage, or the duck confit with pear).

This new Latin American eatery right on Yonge Street sports an over-the-top grand decor and complex Spanish-language menu full of eclectic delights and fresh spins on comfortable favourites (the brisket burger is a real hit). From Toronto’s most dependable restauranteurs- Oliver & Bonacini- Leña is a much-needed highlight in a pre-theatre-appropriate blank spot between the too-casual (my takeout go-to Ritz Carribbean) and too-formal (George, my favourite restaurant in the city but a full-evening kind of place).

The Toronto Centre for the Arts (Sheppard & Yonge)

If you’re up at Sheppard & Yonge, you probably have a car (and may have noticed that the dining options aren’t really up to downtown snuff) so I’m going to send you to Mark McEwan’s Fabbrica at Lawrence & Don Mills even though it’s not actually super close (there are no theatres at Lawrence & Don Mills, so this is my excuse). Every restaurant in The McEwan Group is awesome (but only ByMark on Wellington W is at all close to any theatres) but Fabbrica is probably the most casual/pre-theatre-appropriate. Fabbrica is also home to the mindblowing ricotta fritters featured at Taste of Toronto so that’s really why I’m bringing it up.

To be honest with you, the Distillery District is kind of a wasteland in my opinion. All the restaurants are over-crowded (Pure Spirits), over-priced (El Catrin), or just plain bad (Cluny is terrible, don’t let its lovely decor and decent pastry shop fool you). So I always end up back at Mill St. It’s a basic choice, but it’s a decent one. They get the fundamentals right (by this I mean their french fries are fantastic) and don’t over-complicate, something literally no one else in the distillery seems able to do.

This fantastic Indian place is on Market Street, pretty much right smack in between Canadian Stage’s Berkeley Street and Bluma Appel theatres. It’s a nice area to walk so park before dinner and prepare for a stroll to work off all the awesome naan you ate.

A two-minute walk to the theatre, my favourite version of Chadwicks is a pre-matinee brunch situation- get in on their fresh squeezed juice selection, signature sticky buns, “build-a-benny” options, or the world’s most perfect brisket hash with fried eggs. If the brunch crowd scares you away, dinner’s also pretty good, serving what the website describes as “North American with Latin Soul & British Slang” meant for mixing, matching and sharing. A friend pointed me towards the gigantic “side” caesar with the off-menu addition of brisket and I’ve never looked back.

I’m gonna level with you, Crows hasn’t been open long enough for me to have actually eaten in the area. Maybe I’ll update this article after I’ve hung around there a bit more. Send me recommendations if you have them!

A straight (maybe one minute?) shot east from the theatre, Bierhalle is a rare gem that serves awesome German food (until 2am!) alongside a mindblowing beer menu. Their hyper-customizable brunch options are particularly inspiring. Bring friends and order what’s literally labelled on the menu as a “feast”.

The best Korean food I’ve ever tasted in a hip little spot with some of the city’s coolest cocktails, this place is dangerously addictive. Run, don’t walk, towards the kimchi & pork belly fried rice (a giant portion for only $11).

The giant egg yolk raviolo with spinach & ricotta purée and brown butter that Piano Piano served up at Taste of Toronto was so rich I almost keeled over. It’s a little overwhelming but that first bite was glorious. The relaxed (and kid-friendly!) environment at this aces Italian eatery 6-10 minutes away is a great match to elevate your night out at the fringe theatres.

I’m totally obsessed with this hole-in-the-wall dim sum place about a 30 second walk from the Factory and two minutes from TPM. It’s crazy cheap and unbelievably delicious. It’s also kind of grotty so, weather permitting, get takeout and eat on the Factory’s lovely patio.

Bad Dog is right smack in the middle of two of the best international restaurants in the city- Banjara near Christy and African Palace near Dovercourt, both on Bloor (it’s also right across the street from Civil Liberties, my favourite bar, but that’s a different list). Indian food is more ubiquitous than Ethiopian so I’m gonna send you to African Palace where you can eat some incredible food with your hands and get into that easygoing improv mindset you’ll need at Bad Dog.

Luma on the second floor is also a decent option (as is El Caballito just east on King, if it’s not too crowded) but I like the casual but sophisticated dishes and people-watching patio of the TIFF lightbox’s groundfloor bistro. The spicy gluten-free fried chicken is a particular marvel. Whatever you do, don’t go to Wayne Gretzky’s or order from the Second City food menu (which is just Wayne Gretzky’s).

It’s hard to convince me to go to Queen Street East without stopping at one of the best upscale casual restaurants in the city. A four-course family-style prix-fixe is the only thing on offer with a completely different seasonal menu every night. Grab a spot at the earliest 6pm seating in time for an 8pm show and a little off-the-beaten track theatre pairs perfectly with the elevated comfort food that is Ruby Watcho’s bread and butter.

If you’re headed to an indie show in the strange basement known as Kensington Hall, you want pre-theatre food that’s as a affordable and casual and distinct as the show you’re about to see. The Venezuelan street food on offer at this aces arepas spot will do the trick nicely. Be warned: there’s nothing on this menu that’s not messy so prepare your napkins accordingly so you don’t show up to the theatre covered in food.

There’s nothing all that special about Coco Rice but I just don’t particularly love much around the King & Bathurst area and this list was missing a dependable Thai place.

Unit 102 Actor’s Company lost their Dufferin & Queen location a year ago but they’ve now paired with Leroy Street Theatre to open a new location in Parkdale called The Assembly Theatre. I already love their new space and the West End is full of great food. Maybe head to Barque for some barbecue (like the pulled brisket tostada they served at Taste of Toronto!) to accompany the hearty American fare Unit 102 gravitates towards.

My actual favourite exhibitor at Taste of Toronto was The Chai House with their incredible Pani Puri Shots but I can’t find any info on them beyond an instagram account.