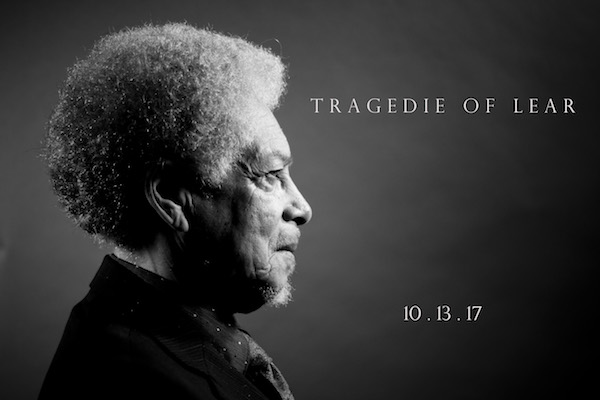 The Palmerston Library Theatre isn’t used very often for serious theatre. With its limiting proscenium layout, casual-but-not-indie atmosphere and periodic subway-related rumblings, it’s rare to see much produced there beyond children’s theatre and staged readings despite its central location and reasonable affordability. What’s great about director/producer Ash Knight’s Tragedie of Lear– a passion project without a production company- is how clearly it cuts through all that noise, embracing the Palmerston’s inelegance almost as a challenge to the audience to focus, as the production does, on what actually matters.

Set against a simple black curtain with mostly generic all-black costuming and next to nothing in the way of props or set pieces, Knight’s Lear is all about the fundamentals- transitions are smooth, cues are picked up, the language is spoken clearly and, most importantly, choices are made. The back-t0-basics aesthetics of the production make room for serious consideration of the storytelling. Knight and his company have a point of view on Lear and every character within it, a well-prioritized quality that can carry any play no matter how imperfect the execution or ramshackle the production values.

Knight comes armed with a few takes on the text that are the foundation on which his production stands, namely the interpretation of Lear’s “madness” through the relatable contemporary lens of dementia, and the rejection of hero/villain labels. Walter Borden’s Lear is compellingly vulnerable and infuriatingly entitled, a fading powerhouse with a hair-trigger temper and the expectation that everyone, including and especially his daughters, ought to bend to his every whim with “yes, sir” subordination. The pain of his disease is palpable- Knight smartly roots Lear’s dementia in a specific diagnosis, Lewy Bodies, a condition with both physical and mental symptoms- and the second childishness and mere oblivion of it all is almost too much to bear by a particularly heartbreaking 4.7 full of, if not self-awareness, some kind of sad repentance and remembered love (though the decision to cut the gilded butterflies line will baffle me forever).

For their part, the daughters raised by this fierce, uncompromising man are in turn forces with which to be reckoned. Honest affection bonds them in the early acts and Cordelia parts ways with her sisters seeming to truly trust them with her father’s care. Courtney Lancaster is the most natural fit in the world for a contemporary Cordelia, “her voice… ever soft, gentle, and low”, her words chosen carefully and her mind constantly at work. The production for the most part steers refreshingly away from doubling, which highlights Lancaster’s appearance as the Foole in the Cordelia-less centre acts, leaving it up to the audience to see what they want to see in the parallel between Lear’s two “poor fools” (costume designer Christine Urquhart drives this point home with a rorschachian design on the fool’s vest). Between the elder daughters, Joella Crichton makes a particular impression as Regan, the middle child who is an active participant in the play’s most harrowing act of violence and is thus usually played without much sympathy. Knight’s “no villains” approach, however, tasks the actress with selling a brutally steep moral decline from lively and caring to spiteful and malicious. Crichton humanizes the descent well, filling the spaces around her lines with informative reactions and specific physical details that help to flesh out an arc that, awesomely empathetic as the interpretation may be, really stretches what’s on the page in this two-hour quarto/folio conflation.

Eli Ham faces a similar but even more extreme challenge in approaching the bastard Edmund as a misunderstood innocent. Downplaying the duplicity of the play’s biggest “bad guy” makes for a confusing subplot and a totally re-contextualized endgame. On a purely theoretical and/or completely real-life level, I not only agree with Knight’s thesis on the non-existence of heroes and villains, I hold it up as a lynchpin ideal when looking at the world with a hopefully empathetic eye. As applied to a 400-year-old text, however, I’m not sure it necessarily tracks with the clarity Lear requires. Edmund’s villainy (rooted in deep-seated hurt, sure, but villainy nonetheless) propels the plot and, without it, he just seems a little dopey, like a well-meaning sitcoms star who keeps accidentally making ladies fall in love with him. Ham throws all the earnest authenticity he’s got into the interpretation, and it’s not nothing, but the well-meaning concept just goes a step too far as applied too thoroughly to a character for whom the role of “villain” is as much a point of pride (or at least a defence mechanism) as it is a necessary plot contrivance.

Knight takes another big swing with his interpretation of Edgar, the “good” brother to Edmund’s “bad”. Portrayed by Byron Abalos as a hardline drug addict, Edgar is the one character really strongly rooted in a place and time recognizable as, at least approximately, here and now. It’s the biggest “take” on a character that the production has and, at first, it’s a hard sell that doesn’t seem to fit with the straight-forwardness of the general staging. But Edgar’s never been a character who’s made much sense to me, his strangely dramatic actions rarely seeming like the behaviour of a rational person. Placing those actions into the context of addiction, withdrawal, and eventual sobriety makes an unexpected sort of sense, grounding his paranoia, erratic behaviour, dishevelled appearance and late-appearing strength in a way I’d never thought of and now am not likely to forget.

Less specific are the characterizations of a few people who play key roles in a common thematic interpretation that takes a backseat in Knight’s production. In humanizing the play’s least sincere characters, the message of the value of sincere service gets lost and with it much of the impact of Kent and Oswald (not to mention Cornwall’s Servant, one of Shakespeare’s most famous unnamed characters who didn’t make the cut in this production). Though Marc R. Bondy and Vijay Mehta acquit themselves well, their characters are overshadowed by stronger interpretations.

For the most part, Knight’s staging is fluid and insightful. Only an ill-advised slow motion battle scene breaks the tension in what is otherwise a hyper-focused and clear-eyed production (the unstageably big battle being written as offstage action is a gift, take it). In the full-tempo sequences (3.7, 5.3), fight consultant Jonathan Purvis’ work is effective in both concept and execution, total commitment from the players easily selling the violence in a blood-free production. Jareth Li’s lighting is simple and mostly utilitarian (a key assist in the seamless scene transitions) but Maddie Bautista’s sound design overreaches, underscoring with heartbeats when the actor can be trusted to raise our pulse on their own and outfitting an elaborate storm when the thundering sounds of the subway, so disruptive to most productions at the Palmerston, provide more than enough ominous punctuation.

It’s a strange production, full of unorthodox character choices and odd omissions, towering established talents alongside newcomers in a rinky-dink space most indie producers won’t even consider. It’s partly over-thought and partly over-played but also brilliantly low-key, wasting very little energy on anything that doesn’t matter. It’s about the text and the story and the people who populate it- no more but by god certainly no less.