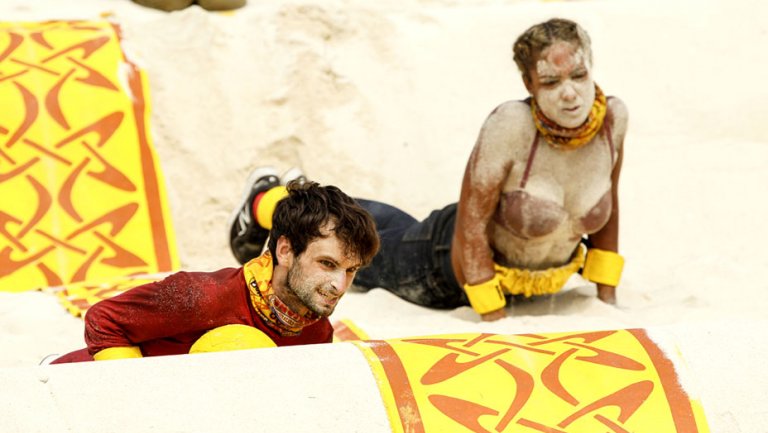 Welcome back to a week of over-caffeinated players and sub-optimal strategy! Let’s sand-slither through it all.

One thing I’m loving about this season is the effort on behalf of production to correct some of the problems that some believe have bogged down some past seasons. One of these issues, from my perspective, is the historic under-editing of women. In a vast majority of seasons, men have way more confessionals than women, even if more women go further in the game. Often, the women that I’m interested in don’t get to share their side of the story in favor of generic commentary from the alpha men of the season. I’m happy that this season, likely due in part to the strong and diverse field of women, the editors are willing to sacrifice some air time from its rippling alphas in Cole and JP, who got zero confessionals last night, in favor of some of the more colorful characters.

Another concern that people have had in recent seasons is that there haven’t been many character moments. Now it seems we know how our contestants play, but it’s more difficult to know who they are, since the editors are so focused on the strategy of the game. Unfortunately, with so many twists, advantages, and change-ups, often it is necessary to dedicate this time to strategy so the audience isn’t totally in the dark come tribal council. Yet, some of the greatest scenes in recent history have been character moments. The scene of Adam and Jay in the hammock during Millennials vs Gen X comes to mind, when the two warring tribemates break down talking about their relationships with their mothers. Thankfully, the editors seem to also realize how powerful these moments can be, and dedicated time at the top of the episode to Ben discussing his PTSD after serving in the marines. Ben is set off by the sound of a bamboo snapping, which is reminiscent of an explosion. His tribemates are understanding, and Ben is given the space to talk to the audience about his goal to serve as an inspiration for veterans, reminding the audience that though they may never fully adjust back to society, there is life after combat and they can still have crazy adventures like Ben is on Survivor. It’s a touching moment that allowed me to feel for a character I previously had no feelings about outside of his relationship with Chrissy, simply based on my fondness for speaking out about mental health.

Now, onto lighter things. The three tribes will play what is essentially a Mario Party mini game in which they have to wriggle through the sand to get a ball over some mounds while their hands are tied. I cannot explain the childlike joy that radiates from me when I watch this challenge, but I laugh out loud practically the whole time I’m watching it. Especially watching Ryan go up, up, up, the ball nearly cresting the hill, only for it to roll back down, forcing him to chase after it on his belly. To top it all off, they are playing for a reward of several liters of iced coffee. Every time I see a reward for coffee on Survivor I have the same terrible thought: If I were to see a coffee reward one day, and a loved ones reward a different day, I would definitely cry more when I saw the coffee. If I were on the yellow tribe, I would have voted Ryan out just for that display. This challenge is also where Desi, who I am sad we haven’t seen more of because she seems to have a positive energy and a good game sense about her, really comes into her own as a challenge beast, which Jeff Probst even calls out later at the immunity challenge. I really hope we get to see Desi go beast mode on some individual immunity challenges, but hope Jeff’s praise won’t stick in the atmosphere and cause people to view her as a huge threat. Desi’s blue tribe ends up winning it all, with red tribe settling for a smaller jug of coffee.

At the blue tribe, Devon and Ashley have both identified Joe as the biggest threat in the game, and make a pact that they will stay together, even if it means going to rocks. Surfing alliance is ready to make a splash (sorry, I had to).

Over on the coffee-less yellow beach, Roark is very numbers-conscious and aware of her position. She and Ali have a meeting of the minds where somehow they become bonded enough that they are going to vote together no matter what for this tribal council. This puts me in the unfortunate position of having to root against either Chrissy, or Ali and Roark collectively, and at this point I’m never going to root against Chrissy. It is a bummer, because both Ali and Chrissy are first and foremost loyal to Ryan, yet Ryan makes no effort to bring the three together. It’s disappointing, and runs contrary to everything Ryan says about himself, which is that he has the best social game out there. If he really believed that, he would have confidence in his ability to bring two close allies together, especially when those allies have a lot to gain from working together.

On the red tribe, Cole eats like a boy, which is to say, very disgusting and disrespectful. The mouth sounds in this scene are absolutely disgusting, and it takes a lot for me to find Cole’s mouth disgusting. Lauren complaining about young dudes on this season has quickly become my favorite theme. The tribe’s annoyance with Cole causes Jessica to gravitate toward Mike. Jessica knows that the idol on this beach is likely in the same place as it was on her old tribe, so she instructs Mike to dig. Why this girl does not just dig herself, either on her own since she’s the one with the information, or at least work WITH Mike to dig is absolutely beyond me. This is extra frustrating to me because the great Jeff Pitman of True Dork Times shared a stat with me this week showing that women have only found idols 16/79 times, which has all kinds of explanations rooted in misogyny, but one of those explanations should not be “women just stand there and tell men to find the idol and keep it” when they have every opportunity to find it for themselves. This, combined with the fact that idols should not be hidden at the exact same place at every camp because it makes it so that if you find one and get a lucky swap, you can automatically find another, makes this an ultra-frustrating scene. Multiple people having idols makes for better TV than one person stockpiling them. Mike comes up, of course, with the idol all for himself, when Jessica could have easily gotten it. I wish Jessica would just claim a tiny bit of agency. At this point I’m feeling like a likely (potentially best-case) scenario for Jessica is losing at the final tribal council. I can’t see her making a move that’s all her own. [Ed. Note: I disagree! I think she’s got game under all the giggling and Cole’s impending ouster will set her free to show that. But I also like Devon and Joe… and Roark. So what do I know? – KB]

The yellow tribe, of course, because they have the most going on strategically, loses the immunity challenge which involved pushing balls through holes and other things I never want to hear Probst say again. Chrissy identifies Roark as the biggest strategic threat besides herself, and discusses an all-girl alliance idea that neither of them ever have any intention of following through with, for reasons I do not understand. If Chrissy is truly someone willing to run every scenario to play out what’s best for her, I’d like to think that she genuinely did consider working with Roark and Ali and we just didn’t see it, rather than believing she’s just blindly loyal to Ryan because he handed her an idol that didn’t matter at all. What I do love that Chrissy does is going to JP and saying that he has to vote for Roark, because Roark wants an all-girls alliance. This immediately sets off JP and makes him decide without hesitation that Roark must go. The all-girl alliance paranoia amongst men is so pervasive and frustrating and obviously rooted in a discomfort with women in power, or the idea that it would be more embarrassing to be voted out by a bunch of girls than any other way, and I’m so glad to see a woman exploiting that and using someone’s negative biases to her advantage.

Meanwhile, Ali’s plan for tribal council is not so inspired. She is voting based on challenge strength, which is not how great Survivor players make their decisions. We are not far off from the merge, there’s no guarantee there won’t be another swap, there is no reason to be making decisions based on this. Besides, Chrissy certainly wasn’t worse in the immunity challenge than Ryan was in the reward challenge. This all comes to a head at tribal council, when Chrissy correctly points out that she was willing to step down from the challenge, though Ali’s version of events is different. Roark says at tribal that she is the swing vote between the two hustlers and the two heroes, and I’m interested to hear some of her post-game commentary to find out if this is a lie or if she is just much less self-aware than I thought. Ultimately, Roark is sent packing, and Ryan will be left to deal with the fallout next week. It really does blow my mind that he didn’t think to try to get Ali on board with this. The two have been together since day one, there’s no reason to think that she would turn on him simply for suggesting that they work with Chrissy instead of Roark, whom Ali can’t possibly have that deep of a connection with after only being together post-swap. I am hoping that this reveals Ryan to be an unpredictable ally, and that it cuts him off from working with the other hustlers at the merge, leaving Chrissy to join back up with Ben and forging a new, Ryan-less coalition from there.

Until next week, try not to glue your lips together with jam!