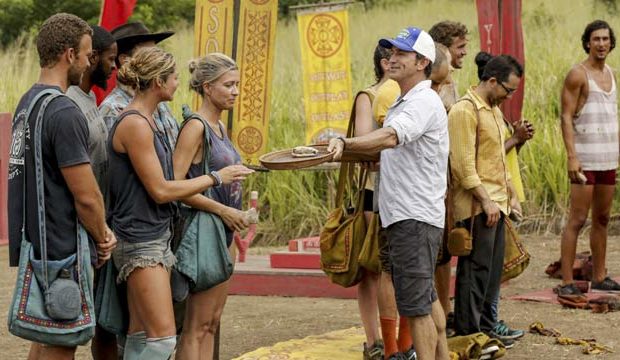 Welcome back! It took us four whole episodes but we’ve finally gotten to a twist that makes the bitter old lady in me come out and wave my cane at the producers for shooting their own show in the foot with their new-fangled advantages that frankly need to get off my lawn. But more on that later.

We get right to it in this episode with a challenge and a classic #dropyourbuffs because we are swapping! Unfortunately for me, Jessica and Cole remain on the same tribe, but fortunately there will be some trouble in paradise in this episode which gives me hope about stealing Cole away from her. Ashley and Alan also wind up on the same tribe, because the Survivor gods are very funny. Desi, who is on the Ashley and Alan tribe along with Joe and Devon, says that there’s no reason they shouldn’t dominate, which means that they are 100% going to tribal council.

I am sad that Hero power couple Ben and Chrissy have been split up, but I’m hopeful that their visibility in this episode and the “previously on” flashback to them running their tribe is foreshadowing for them getting back together at the merge and gaining control again. Chrissy does wind up on the same tribe as Ryan, who was mercifully scarce this episode apart from a very romantic scene complete with soft piano music in which Chrissy and Ryan form a bond as a result of Ryan gifting her the idol in the first episode. Chrissy claims that the gesture made her feel very loved, and that perhaps Ryan gave it to her because she reminds him of his mother, but I think it probably had more to do with her publicly vomiting at a challenge. I admire Chrissy’s optimism and confidence, however, as those are valuable qualities in this game and I’m really rooting for her.

The new tribes play a reward challenge for peanut butter and jelly, and, as Jeff is certain to make very clear, “INDIVIDUAL BAGS of potato chips.” After much rope untangling and puzzle-doing, the new red tribe consisting of Jessica, Cole, Mike, Lauren, and Ben earn their sandwiches and individual bags of potato chips while the new blue tribe- AKA Team Trainwreck- consisting of Desi, Alan, Ashley, Joe, and Devon fall apart. Meanwhile, my favorite new tribe of Ali, Chrissy, and Roark hold their own and seem like they’ll do okay moving forward. JP and Ryan are also on that tribe but, like Chrissy, I’m an optimist and I choose to focus on the positives.

Because the theme of this season is that everyone who makes me audibly groan after every confessional gets an advantage, Jessica finds one in her individual chip bag. This is a new advantage, in which she is required to block someone’s vote at the next tribal council. If her tribe doesn’t go to tribal council, she has to send it to someone on the tribe who does. She tells her fellow healers Cole and Mike about the advantage, and Cole immediately shares it with both Lauren and Ben so every single person on the tribe knows. Can I just say? This advantage is so dumb.

Over on blue beach, Ashley and Alan decide that they’re going to bury the hatchet, which definitely always works in Survivor when there is previous bitterness. The two healers in Desi and Joe, and the two heroes in Ashley and Alan know that they need to compete for hustler Devon’s swing vote. Joe makes up that Alan and Ashley came to him wanting to vote out Devon, who astutely susses out that Joe is putting him on.

Over on the red tribe, Lauren wants to pull Dr. Mike over to be with her and Ben, the only two non-healers on the tribe, so she tells Mike about the advantage, which he pretends not to know about. While Lauren’s goal was to build trust with Mike and show that Cole and Jessica are holding out on him, her plan could unknowingly work even though Cole and Jessica weren’t keeping this from him. Now Mike knows Cole told Lauren, which Mike tells Jessica, immediately setting off Jessica, who knows that Cole likely spilled the beans. Cole tells a half-truth and admits to Jessica he mentioned it to Ben, which demonstrates he can’t really keep a secret, sowing distrust between him and Jessica. Jessica makes this betrayal into a whole thing about how she always chooses the wrong people to trust, and how this is part of some greater thematic emotional hardship she’s endured and I think my eyes are going to roll out of my head. Unfortunately I feel like the show is trying to endear us to Jessica, which gives me the sense that she’ll be around for a while.

Props to Lauren for creating this drama, even though it wasn’t exactly how she meant to do it. One good thing about this terrible, pointless advantage is that it did create drama in this way – but the same thing would have happened if it had just been a regular ol’ clue to an immunity idol, which is way better and doesn’t mess with the strategic integrity of the game, but again, we’ll get to that.

It’s immunity challenge time and for some reason Jeff probst makes six separate Foo Fighters references, and unfortunately it takes the blue tribe Everlong to get through it, and Team Trainwreck is going to tribal. Back at camp, Joe makes a public scene and says that Ashley should be the one to go home, saying that she’s the weakest link over Desi. According to him, he’s trying to attract the target to him so he can play his idol and bounce out one of the heroes. However, he ends up throwing out Desi’s name, saying she would be better to keep over Ashley, even though her name wasn’t on the chopping block on the first place. Desi is understandably upset, pointing out that there are ways to attract the votes to Joe without him risking her life in the game. If Alan and Ashley were smart, they would know Joe appears to be a selfish player and would play the idol on himself. The smart move in this situation is to go for the right hand man of a power player if you’re scared he has an idol.

Before tribal, Devon finds his disadvantage assigned by Jessica which is labeled “secret advantage.” Among the many, many things wrong with this twist, one is that I don’t know why intentionally misleading and confusing the players makes for any kind of better TV. Why specifically tell him it’s an advantage when it’s actually the exact opposite? Couldn’t it just be a note saying “Open right before voting”? The producers intentionally lying to the players feels unfair and prohibits them from making optimal strategic moves when they are given blatantly false information.

At tribal, Alan makes a good point for the ultimately pointless endeavor of trying to convince Devon to vote with him, which is that all of the healers are still in tact, making them a huge threat should they get together at the merge. Of course, this doesn’t matter, because Devon opens his “advantage,” and all it does is make him look stupid for something that is completely not his fault. We now don’t know where Devon’s loyalties would lie because of this advantage. I suppose the point of implementing this advantage when each tribe has 5 is to make the event of a tie more likely. However, the fact is that ties aren’t automatically exciting or good television. This wouldn’t have been a tie anyway because of Joe’s idol, but even if it did end up being a tie, there is a possibility that neither Desi nor Ashley switch their votes, and either Desi, Ashley, or Devon goes out on a rock draw. It’s not clear if Devon would have had to draw a rock since he was ineligible for voting, but my instinct says he would have. Therefore, Devon could have faced a one in three shot of going home due to a twist that he had absolutely zero control over, that Jessica was required to play, which she found through absolutely none of her own volition. This twist was hard to follow, confusing, completely antithetical to any kind of strategy, and reduces the game to pure dumb luck. It infuriates me that after a widely unpopular tribal council in the previous season, in which Cirie Fields was ejected from the game simply because she was the only person without an idol, the producers would continue to introduce inane twists that do nothing but compromise the integrity of the game. I am all about idols. While clues are sometimes found through luck, generally idols are earned in some way. Additionally, players have strategic options when playing an idol. They can hold on to it for as long as they want. The mandates this season that advantages must be played at one specific time limits the strategic agency of the players and erodes the foundation of Survivor strategy, turning it into a sometimes completely luck-based endeavor.

We have one saving grace, which is that next week features the triumphant return of the challenge where competitors must wiggle through the sand with their hands tied behind their back like a snake, which fills me with a truly uncalled for amount of glee. Here’s hoping that Jeff makes lots of Whitesnake references during it. See you then!