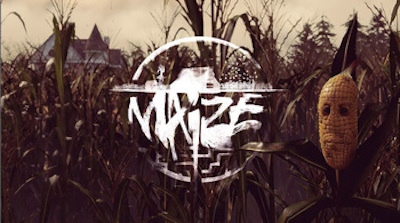 Who knew a game about talking corn would have one of the best narrative twists I’ve ever seen in a video game? Maize, the irreverent new puzzle and exploration game from Finish Line Games is an imaginative, funny, atmospheric experience featuring everything from the aforementioned talking corn, to an irritable cyborg Russian teddy bear, to a surprising final fight mechanic that is both completely bonkers and yet somehow oddly appropriate. The great advantage and joy of an indie game like Maize is that it takes creative risks and provides a genuinely refreshing experience. In short, Maize swings for the fences in terms of its style and content and while the gameplay is pretty simple and the puzzles are fairly straightforward, the humour and downright strangeness of it more than justify the price tag.

Maize begins with the player waking up in a corn field, passing a welcome desk (complete with a stale English muffin) and discovering a creepy abandoned farm house. Before long, it becomes clear there’s more at work here than meets the eye and soon you find yourself being followed around by an irritable cyborg teddy bear, talking Monty Python-esque anthropomorphic corn (yep, you read that right), and being chased by the villainous Cornicabra through a secret lab. Gameplay consists of exploring, finding puzzle objects, and reading post-it notes that help explain what happened at the lab and unlock new areas; a mix of Gone Home and a point-and-click adventure. The finale adds an entirely new, but familiar, mechanic in order to add some action to the climax, but does so without losing sight of the tone and style of the game: it’s always hard to have an action-packed finale mechanic in a puzzle game, but the hilariously bizarre inclusion of another game’s mechanic fits the bill perfectly.

Atmospherically, it’s impossible not to think of both the house from Gone Home in the early sections, and the Aperture Science facility from Portal 2 in the latter portion of the game. The Portal series is one of the best examples of humour, suspense, and atmosphere I’ve ever played and Maize does well to style itself after it. As Resident Evil’s recent shift to a similar style for Resident Evil VII proves, there’s a lot of potential in having players explore engaging surroundings in first person and Maize does well to populate it’s environment with interesting story insight and strange, creative puzzles.

Puzzle-wise, the game is more about chuckling at absurd solutions than it is about genuinely struggling to solve them; unlike the more hear-tearingly frustrating puzzle-solving style of the classic Lucasarts point-and-click adventures like Monkey Island or Grim Fandango, Maize pretty clearly establishes what goes where by showing you the outline of objects in their appropriate place. This is often helpful, but sometimes belies the fact that a few of the solutions don’t make a tonne of sense (though the occasional logic gaps are forgivable given the answer has been telegraphed). For instance, an early puzzle involves needing to move a heavy shelf out of the way. The solution is to place a crate at the base of the shelf then use a pole to lever it; while this makes sense in-and-of-itself, I never would’ve assumed that to be the case, had the outline of the box (which I’d already picked up) not been at the shelf’s base. Again, the outline pre-emptively cut out any frustration I would have had sorting this, but in other circumstances it would have been fun to have to figure out how the pieces work together. Ultimately, this is a minor issues, however, as Maize is more concerned with its story and comedy than puzzle solving and – I can’t emphasize this enough – that is great news. Too often, I’ve seen games take story and particularly humour as secondary concerns to gameplay and for an indie game made by a small team, the emphasis here is exactly where it should be.

Speaking of the story and comedy, for a game that compares itself to Monty Python in the product description, you should have a pretty good idea out of the gate whether you will enjoy this game’s style of comedy (I mean, it is about sentient corn, after all). Very few games legitimately commit to comedy in the way Maize does and for the most part, it works very well. The object descriptions are delightfully strange and irreverent (often describing what you do with the object rather than the object itself…for instance, you will collect many rocks of varying quality throughout the game and name them. It’s a running gag that is equally charming and strange, but made me legitimately excited to learn what each rock was going to be named.) Perhaps most exciting of all, the object descriptions and the bizarre things you do with them (wearing a chair as a hat) actually play into a mystery I didn’t think the game would address about who you are and why you’re here. It’s a brilliantly subtle piece of work that came as an incredibly pleasant surprise in the game’s final act. Where the writing is less successful, unfortunately, is in the insult department: both your companion bear Vladdy and villain Cornicabra spend most of their time insulting you, but despite how clever much of the writing is elsewhere, these two characters (and Bill, one of the owners of the lab) resort to calling things and people stupid or idiot constantly, with the insults and jokes not advancing past this level. This might seem like a minor issue, but with Vladdy constantly (and I mean constantly) commenting on everything you do, hearing ‘So stupid’, ‘This is so stupid,’ ‘This place is so stupid,’ ‘You are so stupid. Idiot,’ over and over becomes not only repetitive but actually suggests a lack of faith in the game’s own weirdness. Obviously the puzzle solutions are silly sometimes, but having an incredulous troll follow me around pointing out that jokes and ideas are dumb was both grating and disheartening. At times it felt like having a friend in the room who thinks what you’re enjoying is dumb and can’t wait to point it out at every instance. The question of intelligence actually plays into the story in a pretty significant way in both the identity mystery and the history of the lab itself, so the idea of focusing insults on intelligence makes a degree of sense, but I wish I’d seen more of the irreverent and articulate humour of the corn and item descriptions applied to the insults (particularly if they’re going to be following me around).

Visually, the game has a great sense of visual style, from the yellow haze of the cornfield to the pulp science of the lab. It obviously doesn’t have the visual polish of a AAA title, but the game more than makes up for it with a greater attention to detail and creative design choices than just ‘basic Unity assets.’ The audio for the game is great too, with solid voice acting around the board, and – as with Portal before it – a key song that is hilarious, catchy, and oddly important to the plot. My only qualm with the sound is the ever-present mechanical squeaking of Vladdy’s steps that gets pretty tiresome pretty quickly.

Ultimately, Maize is a great experience – it’s fresh, it’s funny, and it has an incredible sense of style. If you like irreverent humour and enjoy exploring interesting environments to unearth a mystery, then please, please give Maize a try. Games like this push the boundaries of what’s possible in gaming and as with anything indie, your money goes a long, long way to ensuring that small teams like Finish Line Games continue to create new, creative games. I had a great time with Maize and I would love to see what Finish Line does next, having a game under their belt, but that only happens if people support the game.

Besides, how often to you get to play a game starring sentient corn?

If Maize is any indication: not-damn-nearly-enough.