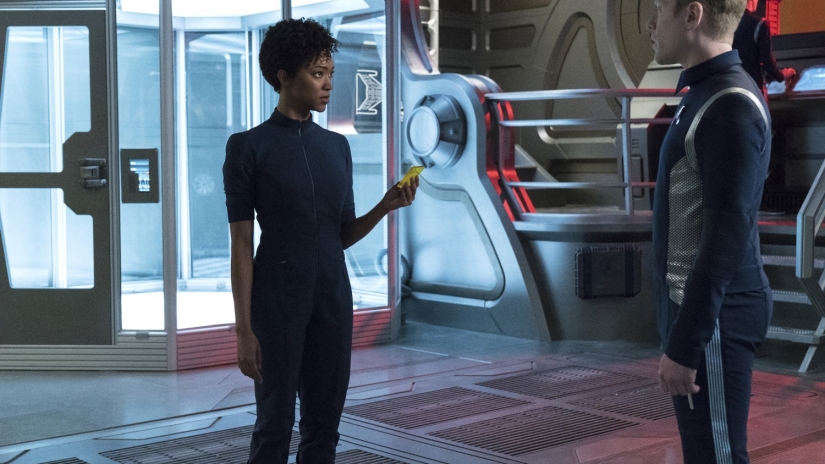 After a slow start and a remarkably incomplete two-part premiere, we now have an actual sense of the kind of show Star Trek: Discovery wants to be. And while it’s a departure from Treks of yore (as advertised), what Discovery has finally set up is extremely promising.

Picking up six months after the previous episode, Michael Burnham is now working on a prison mining crew and has become infamous as Starfleet’s first mutineer (an interesting distinction that somewhat justifies how much time was spent setting her up in the previous episodes). Before long, she finds herself aboard the shiny new USS Discovery, a scientific research vessel that is full of armed guards, off-limit labs, and mysterious ‘black badge’ Starfleet Officers. It’s clear something is amiss and is one of the greatest gifts Discovery has given us: a ship that we haven’t been following with a less than trustworthy crew. Voyager opened with this premise, having the rebel group the Maquis join with Voyager to get home, but the crew dynamic quickly reverted to the usual Trek fare (I know the threat of a mutiny by Chakotay dropped away pretty quickly for me).

The difference here is seeing Voyager through a character like Chakotay’s eyes – who are these people and what are they up to? The situation is further complicated in Burnham’s case since, as a prisoner stranded on Discovery, she is subject to the Captain’s orders and soon finds herself actively working alongside some of her former crewmates and innumerable people who view her as a traitor to the Federation and the cause of the Klingon War.

Burnham’s ability and curiosity quickly position her as an asset and she begins to suspect that Discovery is not what it appears, all leading – of course – to the Captain offering her a position aboard the ship. While Burnham’s appointment to the ship was inevitable, the circumstances of it (compounded by her suspicion that her shuttle’s ‘accident’ was orchestrated to bring her aboard, which seems to be accurate) are inventive and engaging.

We also get a tremendously atmospheric away mission very reminiscent of Alien, Event Horizon, or EA’s excellent Dead Space video game series as the crew explores the Discovery’s sister ship the USS Glenn and the horrors within. Trek has done horror a few times, but few as successfully as this, where Discovery’s excellent design sense and top notch directing really shines. The series really does look and feel like a movie, which is pretty incredible.

But best of all, we get another awesome first for the series: a villainous, untrustworthy Captain. Jason Isaac’s Captain Gabriel Lorca comes off as another stock “Looking to do the right thing in the wonders of space” captain at first (honestly, his first scene could have just been Scott Bakula’s Captain Archer from Enterprise), but we quickly realize there’s a lot more to Lorca than meets the eye…and it positions Burnham for an incredible arc: if you’re notorious for munity against your good captain, how can you properly hope to stop your bad captain? Lorca embodies the best of the guest starring ‘Crazed Starfleet Officer who will achieve his goals, cost be damned’, but rather than an admiral or former mentor as was so often the case in past Treks, in this one he’s the main captain and that is exciting as hell. Suddenly casting Lucius Malfoy makes infinite sense. It’s a great set-up and I’m psyched to see where it goes.

We also meet the rest of the crew, none of whom are particularly happy to meet Burnham, most notably: her twitchy roommate and eventual first ally Sylvia Tilly (a Cadet, rank we’ve rarely seen aside from Chekov in The Original Series, given our bridge focus); Anthony Rapp (Mark from RENT!) as the arrogant biologist Paul Stamets (who is responsible for the mysterious fungi-based teleportation system that is Discovery’s best-kept secret…and a technology unheard of in further Treks, making it all the more intriguing). By episode’s end, Burnham has been ‘requisitioned’ by Lorca for the war effort, but one gets the sense that officially, she’s dead (there’s a beat with Saru, now serving under Lorca, where it seems his ‘death sense’ tingles as the mining shuttle leaves with the other convicts…I suspect we’ll hear it never arrived within a few episodes). She’s started unravelling Discovery’s mysteries, but based on the ending there’s clearly a lot more Lorca is hiding.

Honestly, setting up mysteries about the ship and its crew’s intentions is one of the best arguments for serialization in a Trek show I’ve seen. Discovery has delivered on its promise: we are already seeing a much different perspective than we’re used to. As I suspected last week, this episode was what was needed to make the argument for the show and it has succeeded. Next week should also be an interesting test, to see how the show settles into the rhythm of just running, but from the looks of things, Discovery is a mystery worth solving.