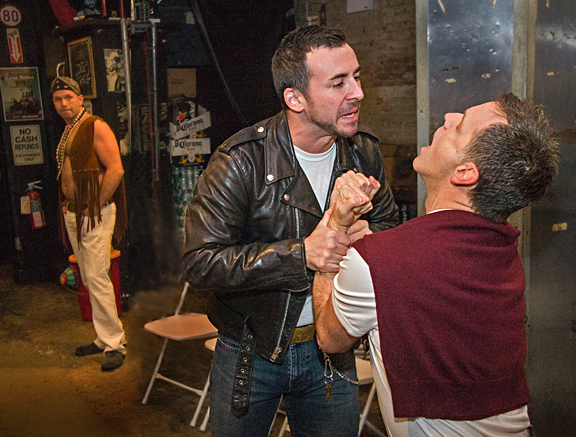 The Stonewall Riots have in recent years gone from a seminal moment in the history of the gay rights movement to a nationally recognized landmark victory in the fight for civil rights in America at large. Doric Wilson’s Street Theater, currently playing from September 20th-October 4th at Eagle Bar NYC, uses the Stonewall Riots as a jumping off point to examine the diverse coalition of characters that make up gay culture and the emotional journeys and societal influences that unify such varied stories and people.

The play relies on an intersection of representatives from various sects of gay culture; the repressed, the curious, the confused, the queens, the dabblers, and everything in between. Trying to create distinct representatives from different parts of the counter-culture could easily lead to reductive stereotyping, but the cast is largely successful at giving a greater sense of depth to what could, in less skillful hands, be merely a parades of caricatures.

The performance is staged along a narrow strip of open space bordered on each side by seats. While such limited space and extreme proximity to the audience surely presents challenges for the performers, it suits the play both in its setting; it mirrors a literal street (Christopher Street, specifically); and in its story-telling as it’s a play built on personal intimate encounters best experienced close-up.

Street Theater is at its best when it’s at its funniest; small moments of surprise driven by the play’s witty dialogue and often tongue-in cheek tone. The play makes a good case for drama and social commentary being best served with laughter to wash it down.

Stand-out performances include Christopher Borg who manages authenticity and charisma with the difficult task of playing what could otherwise be a hackneyed New York mafioso, Chris Anderson who should be given his own drag show with the humor, naturalism, and charm that he brings to his portrayal of Ceil, and Jeremy Lawrence whose mastery of both comedy and real human drama set a standard for what a professional actor should bring to a stage. Mr. Lawrence’s choices as an actor are consistently interesting and surprising, and he alone is worth the price of admission.

While the play is based on historical events, the themes of defending a space for people to be who they are, and uniting together despite their different philosophies or personalities have relevance today in a way that rejects any inclination to label the story as one exclusive to the past. In the world of 2017, Street Theater is an example of the right play being produced at the right time; confronting us with questions of who we are as a culture and giving us assurance that we have the opportunity to decide that culture, and change it if need be through collective action.