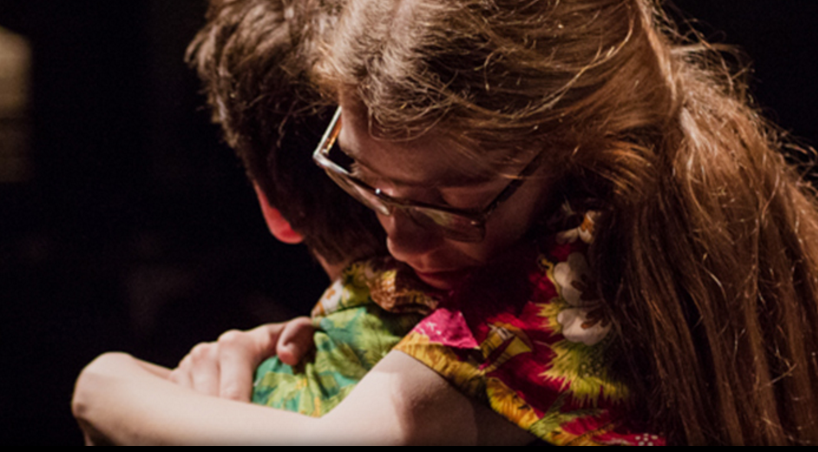 Celebration at the New Diorama Theatre

I chose Emergency Chorus’ Celebration to break my review-fast because it exemplifies what I’ve missed and what I’m missing. I mean, God, what the hell have I sidestepped in Central London alone these past months?

What I’ve missed: Celebration was born of the NSDF — the National Student Drama Festival — and I can’t tell if it has any relation to the London Student Drama Festival, which I participated in. Certainly, the NSDF is a damn sight edgier than the latter, ‘edgier’ being a perfectly appropriate concept in the right context. When they gather in a big performance centre up north every year, the participating universities interrogate form and ideas and make forums and write columns and challenge each other and better themselves and have a big dance at the end; in London, we performed our play one night.

So I missed out.

What I’m missing: a lot of the best companies, a lot of the Fringe-performing companies, a la RashDash, Breach, Barrel Organ, graduated from the annual NSDF week(s). And you notice this, even if their forms differ within the conceptual bracket of ‘experimental theatre’.

They all have that pioneer’s instinct. To take what is political or at the very least the universal and explore (God, I hate the word ‘explore’, but it’s so damn efficient) with a radical toolset of form. Rashdash danced and acted and sung and diatribed their way through Two Man Show. Breach told the story of the US gov’s attempts to teach dolphins speech with a five-way (I think) shared narration amid straight acting and non-literal costuming/set. Et cetera (I’m saying etc. because I haven’t seen or read anything from Barrel Organ yet, just read reviews).

The reason I miss out on these shows is because I’m lazy and I love naturalism and I also don’t like the political content. WAIT. That’s not my Mametian turn to the right, that’s my indictment of agitprop in favour of its stirling cousin, ambiguity. Thing is, I invariably agree with the left-wing politics of the hip Fringey shows, and that’s why I don’t like them. If I’m aware of the debate and the importance of a given topic I’m loathe to attend a glorified civics lesson on it.

The political theatre, and political art more generally, I like is whatever unearths or ploughs up or problematises something I knew for certain. Certain uncertain, or uncertain certain, but not certain certain (God knows what uncertain uncertain means). I want doubt, and nausea, and fear; I don’t want smug. Smug is death. What kind of ontologically unstable art marries itself with an infinitely stable set of policy points? None.

So I often find the political bent of the experimental stuff wrong. Not that they’re all placard-waving political. I loved Bildraum at the 2016 Ed Fringe, and that was as ‘apolitical’ as it gets, although postdrama is so kookily ideated it’s probably on the left.

I pick out a show to see, and spot this NSDF-award-winning piece by an incipient company. I have expectations. I expect mics and instruments and interpretive dance and looper pedals and political engagement, although judging from the blurb Emergency Chorus have deliberately curbed the One Big Topic from their work, whereas all the others of NSDF 2017 discussed refugees and gender identity.

All expectations were met. That being said, Celebration slides a little into the ‘dull formalism’ gully. Ben Kulvichit and Clara Potter-Sweet perform a set of activities that are nominally energetic: dancing, singing, recalling childhood dreams, naming what they’re looking forward to in life, the exegesis of an obscure artist (as a pastiche of the Janet Adler lecture in Adler & Gibb, maybe?), stripping, changing costume and talking to the audience about what to expect from the show itself. But they half-ass these tasks. It’s not so much the choreography has to be tighter and more complex, for instance — I love the amateur dance-your-heart-out style that the UCB encourages at their Harolds and Assscats — it’s that they need passion, as opposed to the glib irony that casts itself over the rest of the show.

Oddly, that irony even obtains in the delivery of the performers. Now, I know there’s precedent. I’m sure Kulvichit and Potter-Sweet’s register is the same as the narrators in Breach’s Tank — that matter-of-fact but never condescending and practiced-sincere tone that walks a tightrope between performer and real actual performer, but I can’t bear it. It’s part of what ruined Pacifist’s Guide for me; it’s definitely what ruined Road to Huntsville for me. Even the youtube recordings of An Oak Tree put me off, and I love Tim Crouch. It’s them, but not. Maybe I’m too binary, I don’t know.

And yeah, sure, a review is off to criticise a tiny aspect, but finding sincerity is the throughline of Celebration. Rather than getting to grips with One Big Topic, Emergency Chorus want to get to grips with grip-getting, and do this in the main by celebrating childhood optimism. Potter-Sweet sits like a toddler in Kulvichit’s arms while they share a simple folky song. They enter a kid’s tent together to speculate on kiddy dreams. They play fight, super-clumsily across the stage.

Apart from the sombre artistic analysis that runs parallel, Celebration’s intellectual wish is for us to pick ourselves up by the velcro bootstraps. Which, if I understood, and I may not have, is skull-bashing facile and really hard to do given the schizoid sincerity of the premise. Read this part of the blurb: ‘CELEBRATION aims to give anyone who can’t quite believe the world they live in, something to believe in’. Does it? Do I take Emergency Chorus’ word for it? Because their apathy and liminal delivery confuse me. Unlike a company like RashDash, with whom I know where my bread is buttered, here I lack anything to grab a hold on, because if I do hold on I feel I’m bound to be mocked for doing so.

Maybe it’s the dramaturgical centrism I dislike. Take the part involving Trump, for example. (I guess the whole piece involves Trump, but anyway:) Kulchivit describes a fever dream where you the viewer dance in a sweaty club as a crossdressing Donald Trump takes the stage but nothing much happens……………. It’s like they imagined they had to mention the man out of duty while failing to figure out the use, and that drives me insane. There’s no more supple and secure existence for evil than becoming part of the routine. I get it, of course: you can’t outright say Trump is bad, that’s gauche; but can’t not mention him in a political festival, that’s more gauche. So you JUST MENTION him, and that’s how he wins. See the WSJ for proof.

I’ve said too much, but I’m rubbish at editing. I didn’t care for Celebration, but at the very least it’s good to see the pioneer’s instinct in Emergency Chorus. Their experiments in form are proof of wonder for theatrical potential, which is what so much of the staid West End and off-West End lacks.

it’s rooted in a trend of hip, contemporary stuff

that comes from the NSDF and the other blue-chips

who, what, where, when

the result of this

peform alongside in festivals + NSDF origin,

not overwhleming, not dryly underwhleming

half=assed passion from lack of energy

especially bad because this is what they promise in blurb

hard to tell whether sincere

pitched at the fringe level (aims to give anyone who can’t quite believe the world they live in, something to believe in.)

also with the music: animal collective, alt-J and kool

political action in face of hardship

celebration can be it’s own action

but thread of half-assed self-expression, espcially infantile return as protest

that being said, there’s an openness they clearly possess

bricolage impulse that’s the beggining of the great artists

bound by nothing but the appearance of boundlessness

not experimental without a thesis