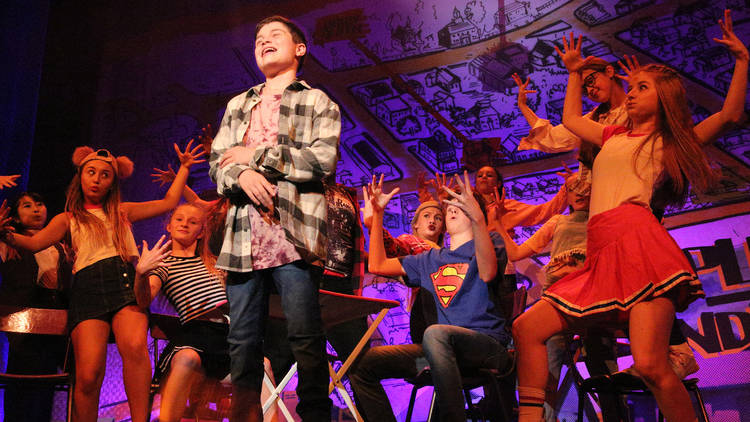 13 The Musical by The British Theatre Academy

Jason Robert Brown is one of the most well-respected composers working in musical theatre today. His credits include Songs for a New World, The Last Five Years and Parade (my personal favourite musical). In 2007, he premiered a show called 13, a musical written for a cast consisting completely of, as the name suggests, 13-year-olds. The British Theatre Academy’s take on this fun show does not disappoint, and boasts an incredibly gifted young cast that I am sure we will see treading the boards of the West End very soon.

The plot is about as generic you can get — new kid arrives in town, tries to fit in with the popular kids, but slowly realises that his real friends are the ones he keeps letting down. However, the content of the script is rich enough with a combination of humour and drama to carry its loose form. It cheekily pokes fun at teenage life but is at no point patronising or out-of-touch, and works well with a young cast because unlike most shows, it is deliberately written to be performed by young teens.

The ensemble are a well-oiled machine, with dance routines sharp and rehearsed to perfection. Every cast members’ enthusiasm shines through with no weak links across the board. Ewan Jones’ choreography is varied and entertaining and his staging allows for fluidity between scenes. The musical relies heavily on its comedy and there are countless laugh-out-loud moments throughout, be that in the dialogue or musical numbers. The two numbers sung by the ‘jocks’ of the school — ‘Hey Kendra’ and ‘Bad, Bad, News’ — are particularly fun to watch. In his direction, Jones manages to get his cast to play up to the comedy of their exaggerated characters but is careful not to let it go over the top. Ethan Quinn as the cheeky but irresistibly lovable Archie steals the show when it comes to the comedy. Playing a geek who has a spinal disease, virtually every line that comes out of his mouth results in thunderous laughter, and his timing is a real credit to the talented actor; his ability to use crutches leaves a little more to be desired but that can be forgiven.

Lead actor Milo Panni is charming as the kind, smart, but ultimately naïve Evan, who gets caught up in his own obsession to be accepted. He has a lovely voice that shows off Robert Brown’s great score, and barring a couple of slips in his accent, carries this big part fantastically well. His co-star, Madeline Banbury, lights up the stage as the sweet Patrice. She delivers her two solo numbers magnificently, delivering incredibly powerful but pleasantly tuneful vocals for someone of such a young age.

Tom Paris’ set design is modern and stylish, accurately grasping the up-to-date setting of the production. Metal doorframes are cleverly used to denote scene changes and are smartly incorporated into the dance numbers. At times however, the stage did feel a little bare, and the show could have benefited from some more detail in its set and props.

The whole cast and crew should be thrilled with this accomplished production, which is entertaining for teens and adults alike and shows off the talents of these future musical theatre stars.