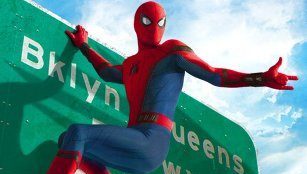 The Rebooted Adventures of Spider-Man

Coming into this film, there were three major issues on my mind: A) How would it fit into the Marvel Cinematic Universe (given that this was long a point of contention between rightsholders Marvel and Sony)? B) Can this film justify its own existence, being the second Spider-Man cinematic reboot since 2012’s Amazing Spider-Man and it’s 2014 flop sequel? C) Can it tell a great Spider-Man story? You may find it odd that telling a great Spider-Man story ranked third amongst my concerns, but honestly if the first two were fumbled that might not be possible: with the inclusion of Iron Man and the lessons of the disastrous Amazing Spider-Man 2 fresh-in-mind, an overly connected Spider-Man might prevent the telling of anything resembling a good Spidey story in the first place. Happily, my concerns were put to rest one by one, which I’ll unpack below, with as few spoilers as possible. Honestly, it’d do this film an injustice to spoil more of its great little character moments, jokes, and surprises than the trailers already have, so I’ll try and keep the content to a minimum; in my opinion, it’s absolutely worth your time and if that’s all you needed to know for now, please feel free to stop reading and come back after you’ve seen it. You’ll be glad you did.

So, how does it fit the Marvel Cinematic Universe?

Following directly on the heels of Spider-Man’s appearance in Captain America: Civil War, Homecoming carves a great niche in the Marvel line-up, acknowledging and drawing strength from the Marvel Cinematic Universe, but from a ‘man-on-the-street’ perspective, closer to Marvel’s Netflix shows than its other big screen endeavours. Following Civil War, Peter is excited for his next adventure with the Avengers, but has been given ‘training wheels’ by Tony Stark who wants him to prove himself by stopping street-level crime and leaving the big stuff to the professionals. He soon finds himself on the trail of a team of robbers using technology salvaged from the Battle of New York (as seen in The Avengers) led by the villainous Adrian Toomes, a jilted contractor who has become a super criminal with his vulture suit. In a particularly healthy twist, Homecoming CONSTANTLY references that Toomes is too small a fish for the Avengers to care about, particularly following their split at the end of Civil War, which finally answers the age-old question in Marvel films of “why doesn’t [solo film lead character] call the other Avengers for help?” You feel both deeply connected to the rest of the Marvel-verse, while still existing in your own corner (in this case, Brooklyn). I was worried going in that Iron Man would be overpowering in the film, but he’s actually used very sparingly, with Happy Hogan (Jon Favreau) acting as Peter’s begrudging baby-sitter. In a lot of ways, Homecoming feels like a sequel to the Iron Man series, rather than the Avengers, in the best possible way. We’re seeing the effect that nine years of Marvel super heroes running around are having on the next generation, while still getting a great Spider-Man story. It’s a delicate balance, but it’s well handled.

As for the story itself, it hits all the expected beats of a Spider-Man tale, but executes them so well that you’ll be happy they do. It’s not an inventive Spider-Man story, but nor does it need to be – Peter is caught, as ever, between his school work and his super heroics (under the guise of an internship at Stark Industries), leading to tough choices between becoming popular and saving the day. He’s aided by the genuinely lovely Ned, his sidekick and best friend – a refreshing departure from Harry Osborn – who quickly becomes his confidant and is also his main lifeline in trying to woo popular, brainy high school senior Liz. There’s a great set-up involving a quiz team going on the road that leads us to an exciting sequence in DC, proving yet again that Spider-Man doesn’t just need to be confined to New York, while still providing a convincingly high school device to justify Peter getting there. The film also sets itself apart by giving us a Spider-Man without tall buildings, leading to an incredible homage to Ferris Bueller’s Day Off as a film finally acknowledges that sometimes there just aren’t things to swing from (long a joke amongst Spider-fans since the 1960’s cartoon where Spidey would famously swing constantly from nothing). Where Amazing Spider-Man struggled and failed to set itself aside from Sam Raimi’s Spider-Man series, Homecoming manages it handily, while also acknowledging the modern economic reality of a lower middle-class hero like Spidey, placing him in a high-rise in Brooklyn rather than a small house in Queens (which, as anyone looking at the housing market right now knows, would be worth a tonne of money in 2017). We’ve seen the Spider-Man of the big city, it’s refreshing to see him try and cut it elsewhere, without losing his distinctly New York vibe.

There are some great laughs, a couple solid twists, and many nods to the Spider-Man mythology (both Peter Parker and Miles Morales, hell, even his home-made suit is a nod to Ben Reilly, The Scarlet Spider) that should have fans salivating for more. The film also delivers a healthy dose of diversity into the mix, casting perfect actors for the parts rather than for their comic book lookalike status (following a trend exemplified most recently by Netflix’s Riverdale), with particular kudos to Flash Thompson, a formerly generic ‘All-American Athlete Bully’ who is here portrayed as a sarcastic DJ by Tony Revolori (best known as Zero, from The Grand Budapest Hotel); Revolori’s portrayal and the script still imbue Flash with all the smug arrogance we’ve come to expect from the character, but filtered through a fresher, more contemporary mode. The film also manages to pack in three Spider-Man villains, without suffering from the same villain fatigue as the woeful Amazing Spider-Man 2 did, which is a feat unto itself. Keaton is spectacular as Vulture, bringing a definite Walter White vibe to the character. He’s a welcome change from the ‘big bads’ that seek to destroy/enslave the world, instead just wanting the good life for his family and the chance to avenge the ‘little guy’ who has been taken advantage of by the rich and powerful.

And, of course, I’d be remiss without mentioning and singing the praises of Tom Holland, who continues to be a charming, vulnerable, acrobatic, and believably young presence as Spider-Man. His brief appearance in Civil War was one of the film’s highlights and he continues to grow and excel here. I’m a big fan of the first two Raimi films (they hit at exactly the right time for me), but Maguire’s Peter Parker never quite worked; similarly, Andrew Garfield was a better fit for the part, but had infinitely worse material, made worse by Sony’s disastrous attempt to launch an entire cinematic universe off the back of the abysmal Amazing Spider-Man 2. Here, the material and the actor are in perfect synch, as Peter’s awkwardness and bashfulness around Liz combine with the youthful fool-hardiness of a teenager desperately wanting to be treated as an adult by his de-facto father figure Tony Stark. It’s a great balance that Holland carries wonderfully. He’s great in the part and I can’t wait to watch him grow with it and the series.

I’d also like to acknowledge what is perhaps the strangest (and in many ways, best) things about this film: it’s not an origin story. The most origin we get is in Civil War, and a quick recap of those events at the top of this film, but Uncle Ben is never mentioned; we don’t hear ‘With Great Power…’, we don’t see the failed mugging, or beloved wrestler Crusher Hogan…we pick up with a Peter Parker already at home being Spider-Man, but learning what it is to be a career hero. It’s a joy to be launched directly into the action without burning half a film telling us a story that by now we all already know, particularly in light of films like Batman V Superman that insisted on showing us the death of Bruce Wayne’s parents not once, but TWICE, it’s a breath of fresh air to just be able to enjoy the hero. (As a side note, there’s an amazing jab at Christian Bale’s Batman that’s too good to spoil here, but it’s one of the most inspired and unexpected gags in the movie.)

Peter Parker means well, but he fails: he wants to be loved and accepted at school and in the Avengers, but in order to do so, he is constantly letting down his friends while striving to protect them. When he didn’t have a suit, he drew a logo on a sweatshirt. His only reward for a day of patrolling the city is a churro a lady bought him for giving her directions. After adventuring for most of a film, he still has to ask his aunt to teach him how to dance and they spend some time trying to learn to tie-a-tie while watching YouTube. His classmates call him Penis Parker. Unlike playboy billionaires like Bruce Wayne and Tony Stark, Peter Parker is us and this film takes it’s ‘high-school-ness’ to heart; all the characters are struggling with their own weird high school insecurities and ambitions, and all get a fair shake. While school has changed a lot since I was there, I saw shades of myself in all of them and applaud a super hero film for taking as much care with its setting as it does with its heroes and villains.

From the first moment when the score kicks in (you’ll know it when it hits) you know you’re in for something special. If you didn’t think you needed another Spider-Man film, Homecoming will prove you pleasantly wrong. It’s a loving portrait of high school, being a ‘regular person super hero/villain’, and of a timeless character; it lives perfectly in the Marvel Cinematic Universe and apart from it, weaving into and out of countless stories that we’ve been following for years and acknowledging the tremendous effect that the events of the previous films have had on the world and frankly showing how much fertile ground there is to be explored in the MCU.

Also, be sure to stick around for the post-credit bump. It’s got a tone all its own and is entirely worth your time.