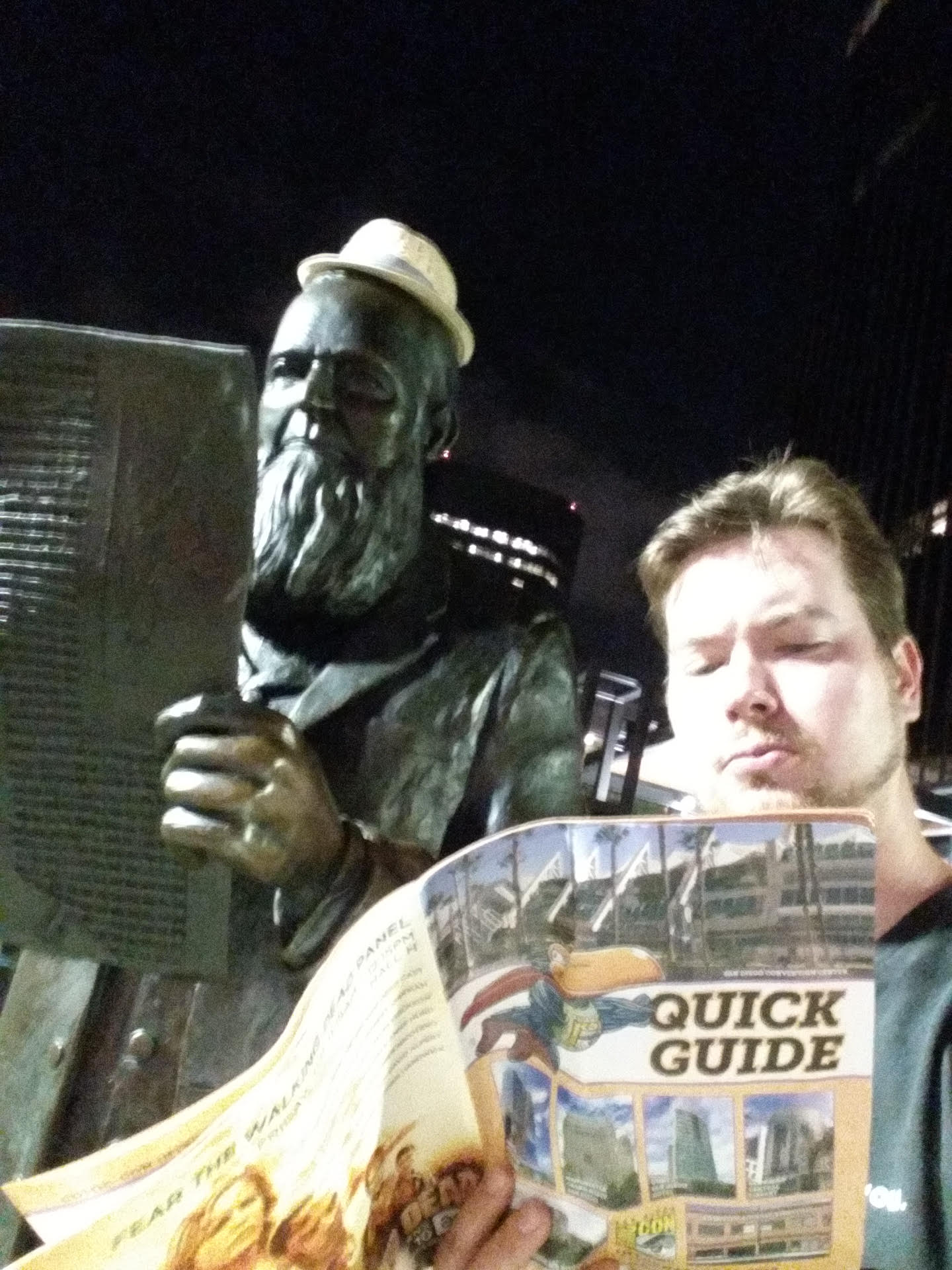 So, this probably goes without saying, but Comic Con is big. Fucking big. Fan Expo in Toronto has grown steadily over the years, but it pales in comparison to the sheer size, scale, and scope of Comic Con. It takes up several city blocks, with hotels dedicating lobby space to installations; every cafe, restaurant, and bar has Comic Con specials and nods to fan culture (some better than others, like my San Diego ‘office’ The Social Tap, whose happy hour specials include an excellent JedIPA – their pun, not mine), but aside from the physical space is the human scope. There are SO. MANY. PEOPLE. This seems self-evident, but it’s almost impossible to imagine without seeing it. The crowds at Fan Expo are a good primer and have prepared me fairly well for how to get around (ditching my backpack for a small sling bag, packing deodorant, etc), but what they didn’t prepare me for is how when numbers increase, so too do lines and interest for niche events. Panels that, if arrived at early enough – usually an hour or so, in Toronto were accessible here are full at all hours. You have to be absolutely cut-throat about what you want to see and willing to sacrifice anything else to see it (for example, as I write this, there is a line for tickets TO WAIT IN LINE for Hall H tomorrow, that started last night at 8.30pm. It will dissipate at 7.30pm tonight, only to reconvene at 7.30am tomorrow. The first panel is at 11 am.) Yesterday, this manifested as not being able to get into the Kevin Smith-hosted Adam West tribute panel; granted, it was in too small a room – as everyone, myself included, did while he was alive, Comic Con underestimated how much Adam West mattered and matters to the fan community, but the fact remains: a tonne of people wanted to pay their respects to ‘The Bright Knight’. I wasn’t too disappointed to not be able to make it in; I’d have loved to have seen the panel, of course, but the respect and love shown to a man who meant so much is a hard thing to be mad at (besides, Adam West would’ve hated that like he HATED baseball cards). It’s humbling, in the way going to any Convention or even just university or college can be: you go from being the Star Wars guy to a Star Wars guy; and you’re happy for it! You’re amongst your people, folks who share your interests and can speak intelligently about them with you…but it does alter your perception of your individuality a little bit. In this context, niche interests are no longer niche…everyone who is the only person who likes the thing you do is the you of their group…and here there are a goddamn lot of them.

Ask anyone in line for the nerd dance party at Fluxx nightclub last night, hosted by Alpha and Geek & Sundry that wrapped around the block: things only you thought you liked are as popular as playoff games here. You need to plan and sacrifice accordingly.

Snooch to the Nooch! …and a venti skinny latte. Extra hot.

My first real ‘Holy shit, I’m at Comic Con’ moment came courtesy of none of other than Jason Mewes of Jay and Silent Bob fame. I was busy documenting a Harry Potter themed Starbucks and looking forward to stronger caffeine than my motel’s swill, when I turned around and there he was, chilling in line, watching Harry Potter and the Goblet of Fire with the rest of us. I got heavy into Kevin Smith’s films in high school, dressing up as both Jay and Silent Bob on different occasions, and for whatever reason randomly meeting Jason Mewes had never crossed my mind. But, there he was. And I was holding up the line by subtly checking over my shoulder every few minutes to confirm that it was him. Huh, I thought, I’m making Jason Mewes wait for coffee. I ordered with the practiced speed of a caffeine addict, balked at the $3.50 USD price (still needed my drug, so whatever) and went to get a selfie with the wall of Public Enemy Number One: Harry Potter posters (impressively, they themed the Starbucks for the Ministry of Magic take-over time period. Awesome and soooo specific) when suddenly, there Mewes was beside me, jumping up and down yelling, “GO HARRY! GO HARRY!” The entire line applauded and laughed. He’s exactly as Kevin Smith describes him from their earliest encounters forward: a genuine, goofy human who just wants to make everyone smile. Possibly because of Mewes’ support, Harry won the challenge and advanced to the next round of the Goblet of Fire challenge and I advanced to the main hall, to see what I could see.

Small though it was, this is destined to be one of my favourite moments at Comic Con; it was unscripted and delightful. Snooch to the nooch, good sir.

So Say We All

As a long time Battlestar Galactica fan, this wasn’t the first time I’d heard most of these people talk about the show, though it was the first time I was seeing them talk about it together. On the panel were Helo, Chief, Boomer, Rosalind, Six, Anders, and David Eick and Ron Moore, the producer and show runner respectively. They swapped a lot of the same stories I’d heard before, but in their always entertaining fashion; many casts talk about being a family, but these guys embody it. By the end of the show, they’d become as close as any of the successful Star Trek casts and it’s fun watching them reunite and poke fun at each other.

You always hope, with an ensemble show, that they are as fun as they seem and happily in BSG’s case, they are (as a side note, Edward James Olmos is apparently a huge prankster. Didn’t think he could be any cooler, I was wrong.)

Two things stood out from this panel, however: the first was that this was the first BSG reunion since Richard Hatch, the original Apollo, Tom Zarek in the reboot, and BSG’s longest and most vehement proponent and defender died earlier this year. This led to some great stories, particularly from Ron Moore, who described how Hatch defended him at an ill-advised Galacticon appearance before the new show had aired, but it also gave the cast time to memorialize this. This culminated in Edward James Olmos (via video) leading the room in a chant of ‘So Say We All’, a fitting tribute to a true hero of the Galactica franchise. Zarek has long been one of my favourite characters (in both the show and in the excellent Battlestar board game, where I insist on roleplaying him as a man of the people. It’s gotten me jailed a few times, even though I was 100% human. When will they learn? #TomZarekForPresident) and I was happy for a moment to eulogize the longstanding champion of the property. Though the guy next to me booed the mention of the reboot in a previous panel, we were united, in that moment, in our mutal respect for an actor who had transcended the shows. Hatch continues to be a unifier of the Galactica family, even after he’s passed.

So say we all.

The second thing that hit me was that eight (EIGHT) years after the end of the series, this reunion panel felt like a Star Trek reunion panel. I was excited for it, delighted by it, and enjoyed the trip down memory lane to those episodes and who and where I was when I watched them. They managed this in such a short amount of time, comparatively, but it’s also the first time in my adult life that I’ve clocked one of these shows that I only watched in adulthood has passed into nostalgia. I was a kid when Star Trek: The Next Generation ended, so it didn’t seem so odd to be nostalgic about it, but I finished Battlestar Galactica the year after I finished university. Time is marching on, as it always must, and it’s a curious thing seeing a big part of my life become a shelved nostalgia piece, to be dusted off and admired, but ultimately long done.

And hell, I’ll be just as excited for the next panel…though I see now that more and more of the shows and properties I care about are going to enter this nostalgia realm…and that’s as it should be. Ironically, it’s just new to me).

Coming tomorrow: Day Two or, “Not getting to a panel early because you’re writing about how you need to get to panels early…a tragicomedy”