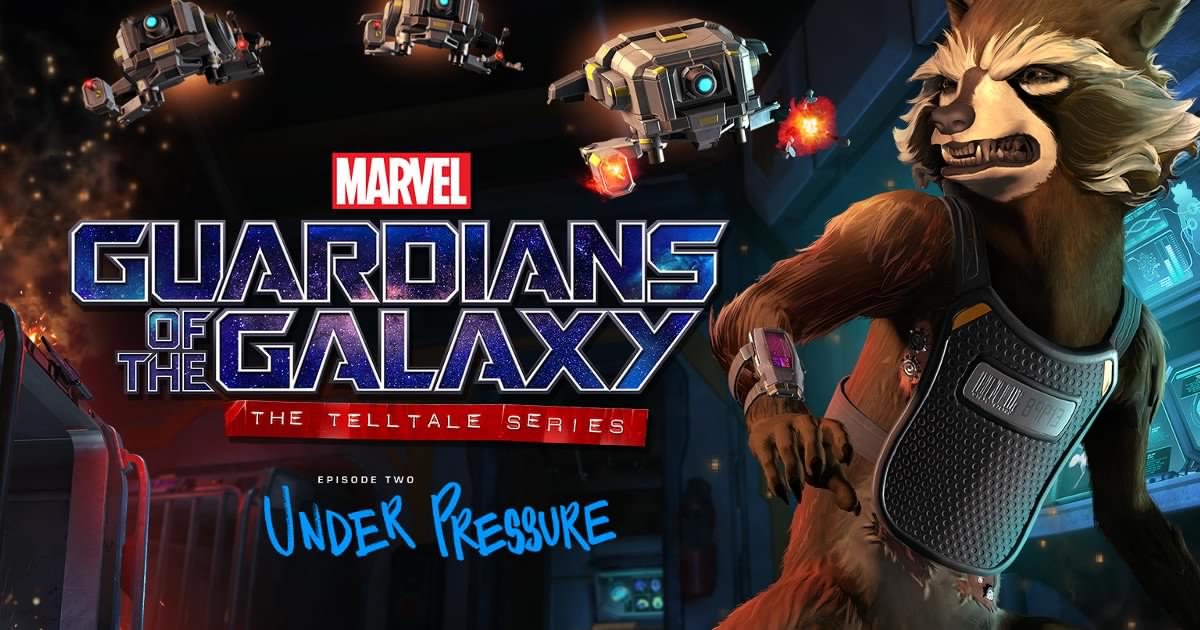 After an exemplary first episode, Telltale stumbles a bit on the second, delivering an interesting, if somewhat less polished chapter in their Guardians tale.

Having last left our heroes with Star-Lord having returned from the dead, thanks to our trusty McGuffan The Eternity Forge, we are thrust immediately into a space escape, which despite the catchy score isn’t particularly exciting or memorable. This is, unfortunately, a prime example of why people dislike Telltale games: occasionally you’re watching a choreographed sequence and occasionally asked to chime in with a push of up or down, but the scene could’ve run just as well without me and never felt urgent, exciting, or fun.

Having sustained heavy damage, our heroes fly to visit Yondu; like all characterizations in the game, he reads both as close enough to Michael Rooker and different enough to be his own thing. If, like me, you’ve seen Guardians Vol 2 between the previous episode and this one, you’ll find you have a pretty strong emotional connection to him right out of the gate, which is nice as the game presents a more amicable relationship between Star-Lord and Yondu than the films traditionally have. Soon enough, we’re ready to make our big choice of the game and happily, it’s a strong one: do you lend the Eternity Forge to Rocket to go and attempt to revive his lost love, or do you chase Gamora’s sister Nebula who is trying to steal back Thanos’ body and who can help decipher the Eternity Forge?

Choices like these are always welcome, though stressful, as they legitimately alter the story for the player. Unlike, say, siding with one person or another (a common theme in the Guardians Telltale series), you feel the real weight of consequence in determining whether to advance the mission or help a friend.

In my playthrough, I wanted to make up some lost ground with Rocket and agreed to accompany him on his quest, which openly acknowledges how many people would react to learning they can raise the dead. Through this, we get a look into Rocket’s back-story, how he fell in love in the test lab and the tragic results of his escape. It’s a neat piece of background, though the story is a bit clunky.

Upon capturing Nebula, you get a fun sequence interrogating her, while also balancing Gamora’s issues, that really shines – moments like these where Star-Lord and by association, you the player, have to take into consideration the mission, the team’s feelings, and what they really need are the core of this particular story and are really fun to navigate. However, you need to really like these characters to enjoy that (and to their credit, Telltale does a great job of making them all flawed and enduring), otherwise these choices and beats won’t carry much weight.

Next, we find ourselves back at the Temple, looking for a secret entrance; it’s not thrilling by any stretch, but does offer insight into the interesting arc given to Drax: what happens when you’ve achieved your revenge? They’re playing it out slowly, but I love the hooks they’ve left so far – I’m excited to see where it goes.

Finally, we have yet another escape, though this one is a fun, zero-G brawl involving unlikely allies and the welcome return of the ‘full party combat’ mechanic, where you control whoever is acting at any given moment. It’s got some fun choices in it and is a great way to end the episode (though ditching the prisoners in space seems wildly irresponsible…particularly given the body count Drax and Gamora have the tendency to rack up).

We end with a soft cliff-hanger, which is a welcome change of pace, and greatly assisted by the ‘Next Time On’ segment, which continues to be one of my favourite additions to the series, as the confessional interviews give us insight and tease us without spoiling anything. It’s a brilliant mechanic and one I hope Telltale continues to use in future games.

All of this would likely have scored higher for me, had the game not been so riddled with odd glitches and quirks; some are technical (all the character sprites disappeared, except for their eyes…even in the start screen until I closed and re-opened the game, costing me some progress) and some narrative (specifically, after speaking to Rocket the first time on the Milano, he goes to the engine room, his home for the rest of the episode, and says if you want to keep talking, he’ll be there. Upon following him, there were no dialogue options other than ‘Bye’, which seemed a bit of a waste. While I understand the complexities of a game like Mass Effect require such interactions based on the number of NPCs to speak to, in such a tight, focused narrative it felt really odd that this oversight occurred and took me out of the game pretty hard (a simple solution being Rocket saying, ‘I’ll be in the engine room, we can talk another time’ rather than suggesting more dialogue was available.) Ultimately, these were minor things, but in a shorter experience like an episode, they seem much larger.

So, while I didn’t enjoy Under Pressure nearly as much as Tangled Up In Blue, it’s also worth noting that we’re only on episode 2 of 6; there are some really interesting stories building (Drax), and the designers have shown they’re not afraid to make big reveals early (Rocket’s story). It’s just a shame that a couple of the segments were so empty (the space escape and the temple). More sequences like the ship-wide brawl and the interrogation of Nebula would be greatly appreciated. Nevertheless, the series still has my interest and excitement and I can’t wait to see where it goes, which in a serialized narrative is always key.

And who knows? Maybe I’ll get to kick another corpse next episode and all will be well again.