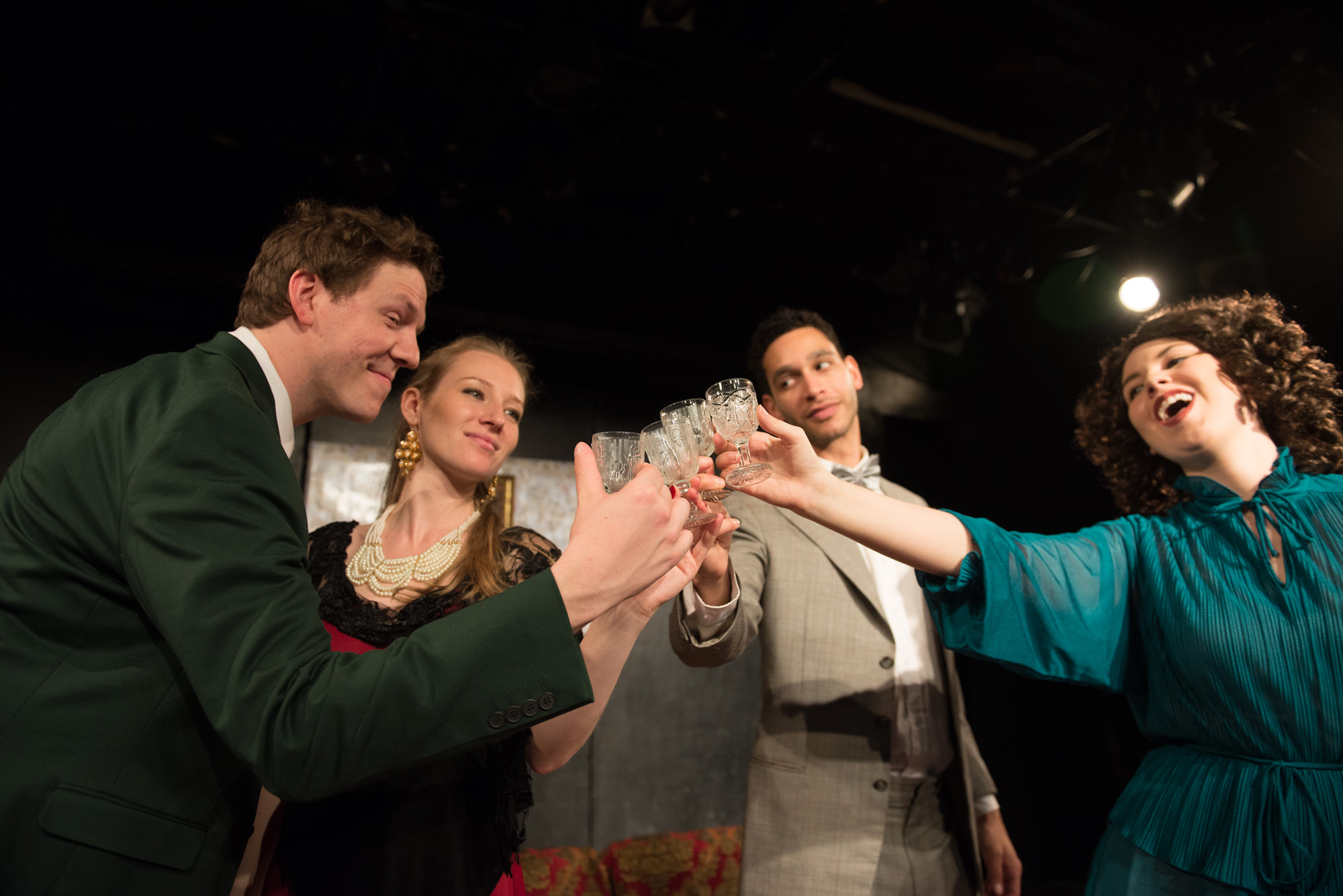 Dear Eleanor, written and directed by Estelle Girard Parks, premiered for one night only at the Kraine Theater. It billed itself as a murder mystery halfway between an Agatha Christie novel and Neil Simon’s Murder by Death. Unfortunately, it lacked the cleverness and intrigue of a Christie novel and the wit of a Simon play.

The plot was straightforward. The year is 1935. We find ourselves in the living room of a large house. A scream reverberates throughout, signaling that Eleanor Barnes (Linda Hill), the matriarch of the Barnes family, is dead. There are four suspects: her son Richard (Andy McCain), daughter-in-law Barbara (Estelle Girard Parks), daughter Gabriela (Genevieve Yosco), and guest and author Clayton (Sergio Acevedo). Who did it? Well, the audience came well prepared to solve the mystery, clad in 30s attire with many flappers, ascots, pinstriped suits, and Stetsons.

But the play took the sagacious theatergoers for granted. The writing creaked along with telltale signs of a novice playwright. Scenes unfolded with characters painstakingly describing exactly what they were thinking, what they were doing and what they had just done. While the scene was touted to be in the 30s, the anachronistic verbiage, props, clothing and accouterments were jarringly distracting as they did not fit into the 1930s vibe.

The climax provided little catharsis as any of the four suspects could have just as easily been the murderer. The fun of a murder mystery is to piece together the clues, avoid red herrings, and, if you’re a veteran sleuth, solve the mystery before the answer is revealed. Alas, there was no such opportunity.

The ending is reminiscent of a classic Simpson’s episode that parodied the Lord of the Flies. In the final seconds of the episode, the narrator, James Earl Jones, announced that the children “were rescued by, oh, let’s say, Moe.” Similarly, here, any of the suspects would have sufficed as the murderer because the only explanation came from an ending monologue by the guilty party explaining the reason for the murder. That motive might as well have been “she looked at me funny once,” or “she slept with my spouse,” or “plastics.” It had no relation to the rest of the play.

You’ve tricked and fooled your readers for years. You’ve tortured us all with surprise endings that made no sense. You’ve introduced characters in the last five pages that were never in the book before. You’ve withheld clues and information that made it impossible for us to guess who did it.

These words embody my frustration with Dear Eleanor. The savvy audience arrived, donned in their best attire and prepared to solve a crime. But the real mystery was why weren’t there any clues?