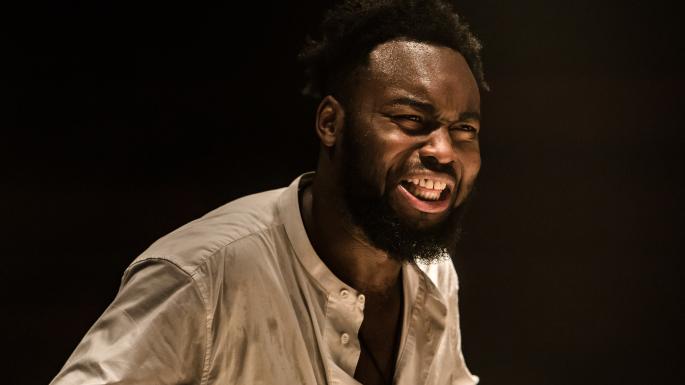 Othello was written 400 years ago but remains shockingly prescient in this day and age. A society unaccepting of a woman falling in love with a black man, does that ring a bell? In Tobacco Factory Theatres’ production at Wilton’s Music Hall, director Richard Twyman takes the modern relatability even further by presenting a distinctly contemporary production that touches on themes of religious intolerance. Arabic chanting opens and ends the play and it’s hinted at that Desdemona converts to Islam to be with her devout betrothed. It’s a creative and insightful angle on the text that really drives home the play’s relevance in 2017.

In the title role, Abraham Popoola has spectacular presence. He has spectators absolutely terrified when he enters his fits of jealous rage with his eyes turning white and his body shaking, but there’s a point a which his screaming rages grow tiresome and a little subtlety wouldn’t hurt. His foil Mark Lockyer goes full villain with a strikingly evil Iago, hateable from the moment he starts talking.

The minimalistic square set by designer Georgia Lowe intriguingly suggests a boxing ring and facilitates quick, multi-entrance transitions. The costumes (Jane Tooze) are very 2017 but not overwhelmingly so. Combat boots for Othello, dungarees for a tomboy Desdemona (Norah Lopez Holden), a graphic t-shirt for Roderigo (Brian Lonsdale) and a nice all black look for Iago. The lighting (Matthew Graham) adds to the ominous atmosphere of the play. All the elements work really well together and showcase creativity across the board.