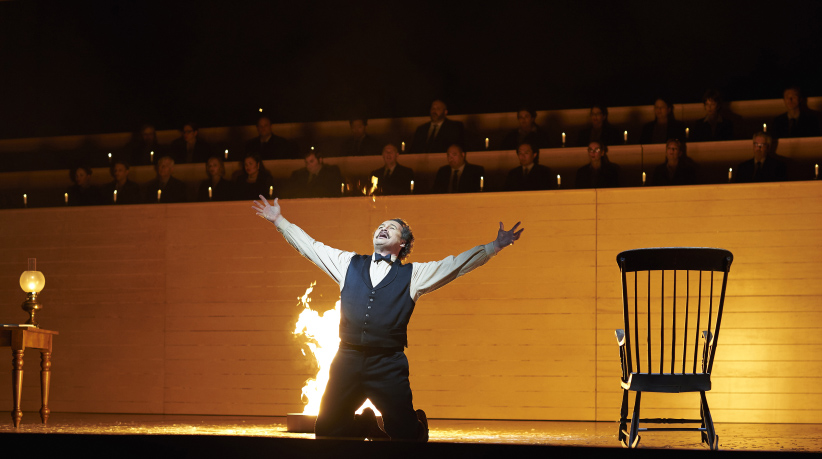 There are a few refreshing intellectual, social, and theatrical ideas in Peter Hinton‘s new production of Harry Sommers’ 1967 Canadian history opera Louis Riel. The judgemental chorus seated high in a jury box of designer Michael Gianfrancesco’s perfectly measured creation, watching history happen with the cold detachment Riel’s dramatic and important story so often receives from elementary school students just counting the minutes until history class is over. A non-singing chorus of Indigenous and Métis performers, clad in red and nearly omnipresent, observing with similar judgement but a heartbreakingly contrasted level of interest. Most impressive and affecting- a trilingual libretto with corresponding surtitles that make the piece equally accessible for English, French and Cree speakers while capturing the tension and discomfort of the story’s culture clash.

Russell Braun is powerful and complex in the title role- his mustache and wig perfectly iconic from a distance, the frustrating humanity behind his bombast revealed when he brings us in close- and Simone Osborne stuns as his wife Marguerite in a stirring Cree aria that anchors the excellent third act.

The rest, I’m sad to say, is something of a mess. The white political figures are broad, rainbow-coloured doofi (outfitted as though the hyper-stylized Video Cabaret had the only “Canadian Historical Figure” costumes available to rent) too laughable to be fully understood for the threat they pose to Riel, Manitoba and the Métis people. The silent chorus is underused and occasionally deployed for such silly tasks as waving grass back and forth. The book meanders, disrupted by 50 full minutes of intermission despite an active performance runtime just barely over 2 hours. Somers’ score has moments of transcendence in those act three solos but otherwise takes its thematic dissonance far past the point of listenability. Hinton’s direction, though clearly very thoughtful, lacks gravitas and buckles under the weight of too many characters.

It’s exciting to see Canadian stories being told at the COC- not just because it’s the responsible thing for a government-funded company that bears the country’s name to do, but because we have in our history stories as big and complex and, frankly, operatic as anything Puccini set to music. Peter Hinton brought some big ideas to this very flawed telling of a very tellable tale- some too big, some too small, some too “silent chorus waving grass” – but he couldn’t overcome the flaws of structure and form that are a high wall for a Louis Riel audience to climb on its way to truly getting it.