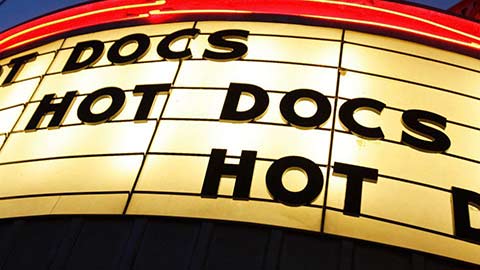 This year’s International HotDocs Festival in Toronto, is made up of eclectic array of documentaries divided into different categories. Part of the collection this year is an emphasis on the Asian perspective with docs like Tokyo Idols, Still Tomorrow and Ramen Heads. Other documentaries explore niche subcultures in society like, Mermaids and Shiners. However the best of this years festival have created a transformative emotional response in the viewer. These are some of the finer examples at this years HotDoc Festival and they should not be missed.

Ann Shin’s My Enemy, My Brother is one of the strongest Canadian documentaries this year because it packs an emotional punch. The story chronicles two war veterans on opposite sides of the conflict from the Gulf Wars, Najah from Iraq and Zahed from Iran. 25 years after they fought against one another they met in a waiting room in Vancouver, British Columbia. Shin captures both men’s journey towards their past. Najah whose hard life shoes from the wrinkles on his face, travels back to Iraq searching for the lost wife and child he had to leave behind. Zahed travels to Jordan to see his family and hopes to see his dying father one last time. The documentary tries to balance historical footage for the Gulf wars to provide necessary context for the viewer about the subjects in the film. Najah returns to a bunker in Iraq much like the one he was held in as a prisoner of war. This visceral moment allow the audience to see the personal repercussions of war, as Najah shows physical discomfort on his face reliving what it was like to be a prisoner on the verge of death.

The documentary is a “fly on the wall” style, as well as a “talking heads” style, but the most effective moments where when Shin’s cinematographer Duraid Munajim shoots the scenes following the subject’s action as if the camera was a silent spectator. For example, when the camera follows Najah to different neighbourhoods in Iraq trying to trace his wife and son were particularly powerful because we as the audience could clearly see his frustration and sense of loss. He would ask people in the streets if they had heard of his wife and son, and he never received the answer he wanted.

Even though the film explores both men’s separate stories, the most powerful impact is when the two men are connected.Throughout the film, I wondered how do these two parallel stories come together? Shin deliberately keeps that secret from the viewer and builds the tension to the very end. The film comes full circle and returns to the waiting room in Vancouver. When both Najah and Zahed discover why they knew each other 25 years earlier the two transform from enemies on either side of the conflict to brother’s. This emotionally climactic scene is an unforgettable moment in the film and one of the highlights at this year’s festival. Shin’s film reminds us that when we begin to see the humanity in what we conceive as “other,” only then will we find reconciliation and peace.

The second documentary film that stayed with me for days was Kalina Bertin’s, MANIC. This film is a unexpectedly cathartic journey about Bertin’s quest to find out secrets of her father past, and how they hold answers to her family’s current issues with bipolar disorder.

Bertin splits up storying telling in two frames. The first frame is of her father and his story and the second frame focuses on her siblings today, Felicia and Francois Sean who experience psychotic episodes. Bertin includes archival footage to open the film of them as children shot by her father. The audience sees the oasis life living on a caribbean island of Montseratt, riding ponies, eating bananas off the vine and swimming in the Atlantic ocean. The archival footage feels otherworldly and peaceful since the children were so connected to nature. This is a stark contrast to the way Bertin shoots her family’s life today living in an urban apartment in Montreal surrounded by walls. There is a claustrophobic quality to their dwellings which represents her siblings being trapped by their current struggles with mental health.

The story of her father, George is told through archival footage, photographs and interviews with previous lovers, friends and family. The interview subjects describe him as a charismatic man who could easily manipulate people to do things they wouldn’t normally do. The audience quickly discovers that George was a cult leader in the 1970s in Hawaii. By talking with those cult followers she discovers that her father had many children all over North America. Many of these half siblings also suffer from mental health issues. As Bertin learns more and more about her father, he becomes a complex con-artist who instead of helping himself went from one relationship to the next never finding stability. Bertin leaves out the most important details to the end which help the viewer understand where his motivations were driven from. The thorough investigation of her father is terrific and it leaves the audience with few questions about who this man was and why he acted the way he did.

The present day footage of Bertin’s siblings going through phases of hypomania and mania is intense. Since Bertin is shooting the film, the audience sees these episodes through her eyes. These moments are raw, and Bertin doesn’t shy away from showing her siblings lost in despair on their bed or welding a knife in fits of rage. This might be triggering for an audience member, but it’s important to show these experiences because they can help people better understand the day to day lives of someone who struggles with bipolar disorder. The most heartbreaking scene was when Felicia describes the feeling of shame going to the welfare office and not being able to get her “life together” to provide for her daughter. She breaks down into tears and we cry along with her. Mental health should be discussed more often, but more importantly it should be seen. Bertin crafted a gorgeous portrait of her siblings challenges and will likely provoke people to find help for themselves or find help for other who also suffering from mental illness.

The last film that will have a different cathartic response is Neil Berkeley’s delightfully funny documentary, Gilbert about the notorious cranky comedian, Gilbert Godfrey. Godfrey is a known for his voice, that crotchety high pieced unnerving sound, but in the last 16 years he has also been known as a blue comedy comedian who like Joan Rivers wants his comedy to provoke a response. Berkeley is an artist who understands how to capture candid moments as in his previous work, Beauty is Embarrassing. Gilbert is no different and Berkeley wants to reveal the real man from behind the curtain as a shy and sweet private man.

The story opens with a revelation that Godfrey has been in a monogamous relationship with a woman named Dara and they were expecting a child. Immediately Berkeley draws the audience into this very shy, awkward family man walking around his Manhattan apartment in a bathrobe and slippers. We see his two adorable children wrestling and goofing around with Godfrey as well as family photos on the mantle. Berkeley doesn’t stay in these moments long and tells Godfrey’s story through interviews with fellow comedians such as Whoopi Goldberg, Bill Burr, and Jim Gaffigan, as well as Godfrey’s family to understand who Godfrey is and where did this creature of comedy come from.

Berkeley understands comedy and he emphasis this with they way he edits Gilbert. The film is told non linearly jumping all over Godfrey’s career and personal life. This fluid structure of the story is a nice change from other documentaries in the same genre because it keeps the audience on its toes allowing for spontaneity. There are many subjects in the film that are being interviewed, and as much as they want to send up Godfrey, they also want the opportunity to roast him. Several comedians would say, “Did you show how cheap he is?” Cut to a shot of Godfrey going to the front desk for a comedy gig and picking up free toothbrushes and toiletries. Then the comedians say, “Did you know he takes a Megabus to gigs?” Then Berkeley would show Godfrey curled up on a lawn chair waiting in line for the Megabus. Berkeley edits these clips together to build to a climax and causing a guttural reaction in the audience.

At the film’s core is the story of familial love, which doesn’t mean you have to end your comedy career. Berkeley focuses on two families in Godfrey’s life, one older and one newer. The older family is his relationship with his two sisters and his mother. Gilbert was definitely a Momma’s boy and he still visits his two older sisters every day when he’s in New York. Here we see a less robust Godfrey, a more toned down man. He’s shy, awkwardly sitting beside his two siblings, but he still makes them laugh with his silly faces. One particularly moving moment was when Godfrey sat next to his sister who was undergoing chemo treatment. He had a sense of duty and even would wait for her while she took the city bus home. There’s a quiet dignity in this man.

The new family is with his partner the quirky and beautiful Dara who has been in a relationship with Godfrey for twenty years. Ten years earlier she became pregnant with their first daughter, which caused them to get married. These are the sweetest moments in the film with Godfrey kissing his children and his wife Dara giving him sweet kisses on the head. While they’re in the park she says, “I love you, Gilbert,” and his response is, “That’s your problem.” Perfect delivery, but yet it touches a nerve. Gilbert describes himself as living in a ‘Twilight Zone,” but what was beautifully captured by Berkeley was that Dara never wanted her husband to change. They truly understood one another and this is why Godfrey has such a remarkable life.

In regards to Godfrey’s career, he has had ups and downs in his popularity. The biggest blow to his career was when he lost his commercial contract with Aflac due to some offensive tweets over the tsunami in Japan. During an interview in sharing the story, Godfrey got a gig he’d ask his agent, “How much does it pay?” The agent replied, “Oh you don’t ask that question anymore.” Since Godfrey is supporting a family now, he needs to take any gig he can get going to small towns, selling his own DVD’s and books. Audiences love him and Berkeley shows the reactions of people’s faces aglow at Godfrey’s shocking yet hilarious delivery of joke after joke.

Godfrey may have made mistakes in his career but he is truly hard working and persistent. He is like the travelling salesman of our time travelling from town to town just to sell his shtick. Berkeley has allowed the viewer to show where there’s joy and love there is also humour.