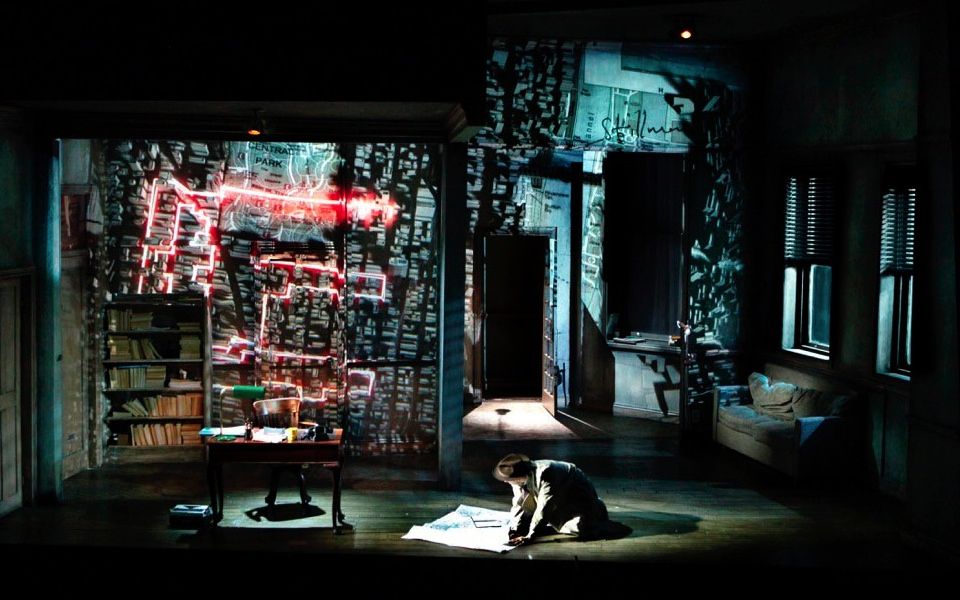 City of Glass at the Lyric Hammersmith

Boy does this play keep you gripped. Partly a detective noir drama, partly a psychological thriller, partly an exploration of the human mind, City of Glass is filled with so many twists and turns that it keeps you guessing long after you’ve left its home at the Lyric. With innovative effects and an array of fresh ideas, this production presents an utterly engaging piece of theatre.

Based on Paul Auster’s novel of the same name, City of Glass follows crime writer Daniel Quinn, who due to answering a phone call that was never intended to reach him finds himself embroiled in the protection of a young man fearful for his life at the expense of his estranged father. On the surface, this is a standard detective drama. A depressed protagonist, troubled victim and mentally unstable villain. However, the play explores much more than this, encompassing issues of loneliness, religion, imagination and without giving too much away is turned on its head about two thirds in. Allegiances are blurred, no character can be trusted, and even after the play has ended it is unclear what was truth and what was fiction.

It’s taken me a good 24 hours to work out how I feel about this play and even now I’m not totally convinced. I felt I had been entertained, but also felt slightly robbed of an explanation for much of what I had just seen. I’m certainly not someone who needs a “happily ever after” ending, nor do I crave answers to everything, but in the case of City of Glass the lack of clarity seems to be taken to the extreme. About an hour in, I felt I had a grasp of the possible routes we could be heading down, and then things quickly changed. After taking time to digest everything however, I now believe it’s an incredibly brave and brilliant piece of writing that would probably be enriched with multiple viewings. Given its often bizarre narrative, I imagine it will be quite divisive amongst audiences, something that the author and creative team might well have been going for.

The second thing that differentiates this play form other is its approach to staging and set design. The set is simply two rooms in Quinn’s home: a study and a lounge. Video technology is then used to change between the many locations within the play. Lysander Ashton’s video design is simply wonderful. The crisp images that are displayed, be that period paintings, train station boards, or brickwork are more realistic than any I have seen in theatre and you’d be excused for assuming they were actually painted on. Video is also used for storytelling when the play jumps back in time and to demonstrate the thoughts in Quinn’s mind. While such effects dominate the play, they do not feel intrusive or distract from the drama; instead, they perfectly accompany it and add to the mystery the piece attempts to create.

Similarly to both the plot and design, the casting isn’t kept simple. The role of Daniel Quinn is shared by Mark Edel-Hunt and Chris New. While it’s clear to the audience that two actors are playing this role—director Leo Warner takes advantage of this to demonstrate time passing by rapidly switching between actors—both play the part so similar to each other that it’s very difficult to tell whether Edel-Hunt or New are on stage at a given time. This part requires the personal performance of a man who is grappling with the loss of his family and the frustration of not solving his case. The two actors’ ability to work so closely together in creating one character is incredible. Chris New also plays Paul Auster (not to be confused with the author), the man the original phone call that Quinn answers is intended for. This works when the characters meet as it hints at whether things are actually in one of the character’s mind.

Vivienne Achampong presents a variety of differing and entertaining characters, covering all female roles within the play. She’s particularly enjoyable to watch as the sensual and self-assured wife of victim Peter Stillman where she gives a passionate if not slightly over-dramatic performance when convincing Quinn to take her husband’s case. Jack Tarlton gives a deep and meaningful performance as the schizophrenic and scared young Stillman who, if to be believed, is overcoming the emotional trauma of being imprisoned by his father for nine years. He also plays the senior Peter Stillman who has become encapsulated in strange religious theories. When we first meet the young Stillman, he explains his experience through a long and honest monologue that Tarlton manages respectfully, portraying a man who is damaged and struggling with mental illness. He also carefully balances similarities and differences within his two parts. Older Stillman has the same accent and intonation in his voice but speaks a lot slower than the younger character for instance.

City of Glass should be applauded for offering something different to what was expected and what is being produced elsewhere. The design and casting both compliment the complex source material that has been delicately adapted for the stage by Duncan Macmillan, and Leo Warner steers all the elements of the production to create a fine piece of work that ignores any preconceptions of traditional theatre.