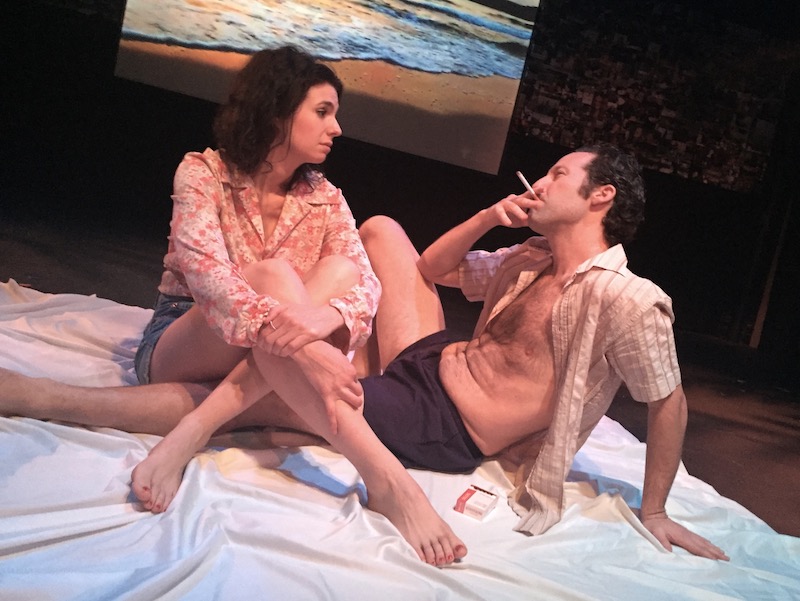 When something about a play doesn’t work, and perhaps more importantly – its run time exceeds 2.5 hours – one’s thoughts naturally tend towards the existential. What does it all mean? Why am I here? Loose Ends unfortunately struggles to be relevant to modern playgoers as its message has been muddled in the almost 40 years since its debut.

Loose Ends is a 1970s period piece written by Michael Weller and originally produced in 1979. It chronicles the life and marriage of Paul (Loren Bidner), who has just left the Peace Corps and Susan (Sarah Mae Vink), an aspiring photographer. The couple falls in love in Bali and vows to meet up again in the States where they endure the 70s together.

The remaining characters are caricatures of 70s tropes. Through the years we meet Paul’s successful brother Ben (Jason Asher), his friend and Vietnam veteran Doug (Erik  Endsley) and Doug’s perennially pregnant partner Maraya (Maggie Alexander), Paul’s colleague Selina (Hui-Shan Yong) as well as a host of acquaintances and friends who pop in and out of the two protagonists’ lives

So let’s get to the existential questions:

What does it all mean?

Like many things in life, it’s really hard to tell what it all means.  And the title of the play, “loose ends,” keys the audience into the fact that there won’t be any neat resolutions.

But for those of us who didn’t live through the 70s (full disclosure, I am a child of the 80s), the character decisions are enigmatic and haphazard.  For a modern audience, it’s as though the play needed a translator, perhaps a sagacious fellow theatergoer whispering, “Well, you really had to live through the 70s to understand this scene.”  The play doesn’t provide enough context to stand on its own and thus feels dated and obscure.

Paul wants to settle down and have a baby, while Susan wants to chase her dreams. The significance of this role reversal is lost in the revival. The characters are breaking free from what is expected. But, like a joke’s punch line without any lead in, the emotional impact of so many of the play’s moments becomes stifled. For example, Susan rejects family for career. But the play is devoid of the necessary lead up to make this choice matter. It’s as though the play assumes the phantom translator will again be there to remind the audience of how big a deal this would have been in the 70s. The importance of each character’s decisions is ultimately obfuscated by a lack of solid foundation of who these characters are.

And there lies the real issue with the play. The necessary elements are present but don’t add up. Without a doubt, the elements are there: Love. Affairs. Lies. Ambition. Pregnancy. Career. The problem, however, is that scene after scene involves the characters simply talking about past experiences. Each scene (which is a snapshot of a moment in each year of the decade) involves characters reminiscing or discussing moments from the previous year.

But what makes the answer to the big question (what does it all mean) continually elusive is the lack of opportunities for the audience to get inside the characters heads.  The play does not move beyond the characters simply making recitations of past events. Unlike, for example, a scene in which two characters may clash or disagree, the repeated reciting of events in near monologue form left me as an audience member unable to assess the validity or honesty of such stories.

The unfortunate result is that when a character expresses a real feeling, it comes off as a complete surprise. Paul has feelings for Selina. Who knew? Susan almost leaves only to return and confess her undying love for Paul? I’m still puzzling over that one. So much like life, it’s confusing and I don’t have a lot of answers.

Why am I here?

This is a question I decided to ask on behalf of the supporting characters.  Throughout the play we run into various friends and acquaintances of Paul and Susan. We meet a Bali fisherman, Paul’s friends, Paul’s brother, and work colleagues/potential love interests.

The acting itself was entirely satisfactory, yet the reminiscent backwards-looking nature of the play left the actors with little to work with. The lack of direct conflict meant there were few highs or lows and it was a rare moment that the play provided any emotional range for the actors to explore.

The one highlight was Lawrence (Gus Solomons Jr.) who lived in the moment, brought an acerbic wit to his scene that stole the show. Then he left and was never seen again. Such is life.

Loose Ends is directed by Terry Schreiber and running through April 15, 2017 at the T. Schrieber Theatre.