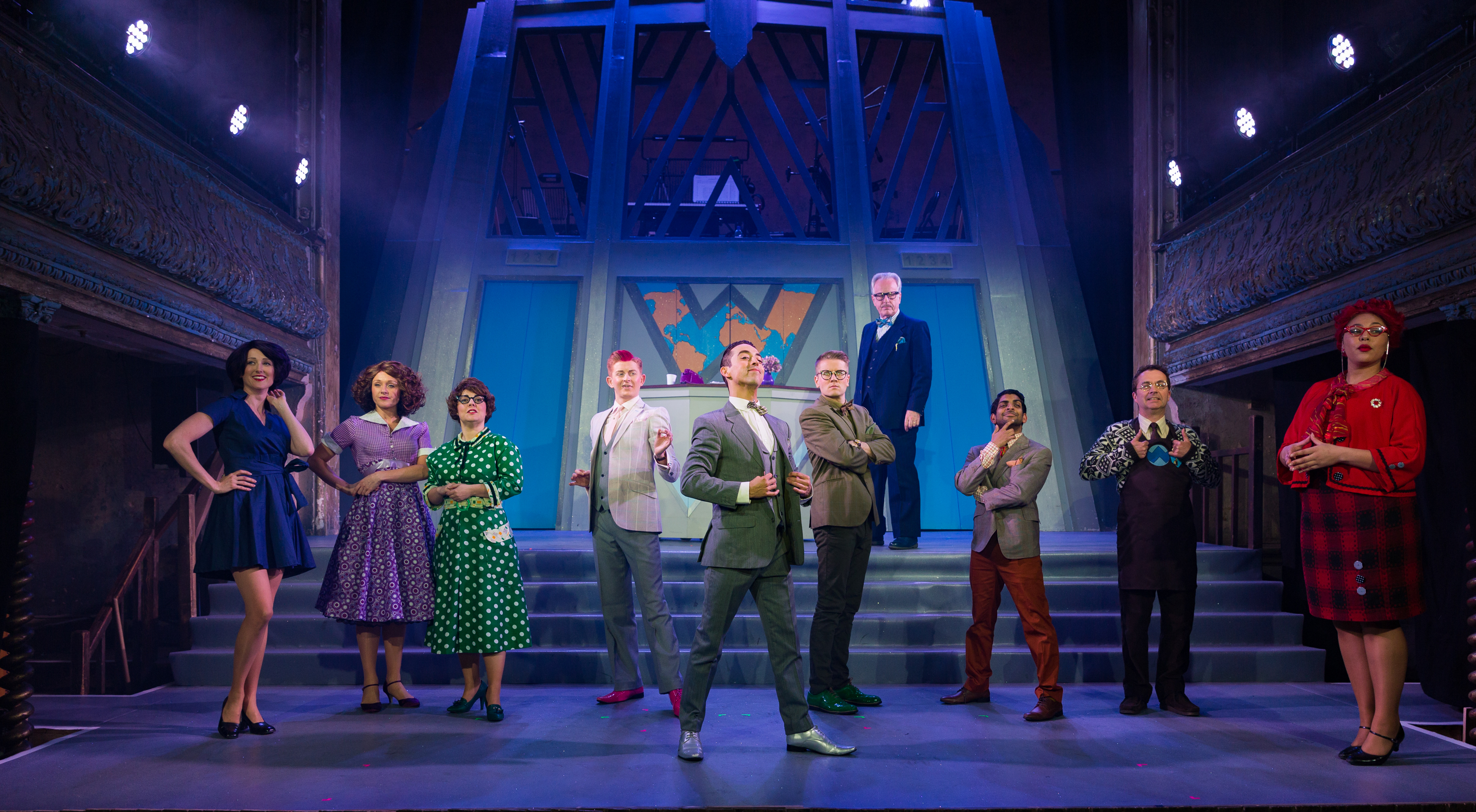 How To Succeed In Business Without Really Trying

There’s not anything groundbreaking or spectacular in this production of How To Succeed In Business Without Really Trying at Wilton’s Music Hall. Neither is there anything particularly problematic or dull. It’s very much an ok production, of an ok show. No more, no less.

Describing a show as “ok” seems a little insulting, but that’s not my intention. I had a pleasant time and didn’t leave feeling let down or disappointed. The comedy musical does enough to entertain, and has numerous funny moments that work very well. However, it lacks a slickness, especially in the chorus numbers and scene changes, which prevents the show from really wowing an audience.

The plot tracks the monumental rise of Ponty Finch, from window cleaner to vice-president of a large multi-national company, aided by a self-help business book. The script is knowingly farcical and littered with nods to the audience. This all works pretty well, but with an unusually long run time the simple concept does wear thin towards the end. The score, while perfectly pleasant, isn’t that great and lacks show-stopping numbers. Written in the 1960s and centred on the male-dominated business world of the time, it also feels dated. Its female characters have little more to do than pine over their male counterparts; even when allowing for the fact that is set in a different era, this can be a little irksome to watch.

What the production certainly doesn’t lack is a talented cast. There really aren’t any weak links and everyone gets the tone of their eccentric and exaggerated characters right. Lead Marc Pickering puts in a charming and cheeky performance as Finch. He controls the space when on stage and engages the audience with everything he has to say, especially during his well-timed delivery of the show’s funniest lines. His physicality plays into the comedy—in particular the way he subtly acknowledges the audience when something is going his way. Coupled with a great singing voice, which is under-utilised, he successfully encompasses all elements of this part. He’s supported by a cast of talented actors who all have their moment to shine and do not disappoint. Hannah Grover stands out, managing to make you empathetic to her character despite the limited material she has to work with, and performing her solo numbers beautifully (even if they are all about becoming a wife).

While individually all the characters come across well (especially when they’re being funny), there is less success when it comes to chorus numbers. This is a musical that prides itself on glitz and showbiz and there are many opportunities in the production to couple the comedy with spectacle. Unfortunately, we do not get this. Part of the problem is that it’s a small cast and so not only can there not be huge company dance routines, the cast are also required to double up on parts. That being said, this doesn’t excuse the fact that at times the action looks messy and cluttered. There are attempts to add different techniques into numbers but the final execution is not there. Additionally, cues are missed and scene changes are clunky—all things that should be easily avoided. Visually, the show looks smart thanks to Mike Lees’ set and costume design; the matching colours are especially pleasing.

I come back to my assessment: the show was ok. In fact, it was pretty good. It just wasn’t great.