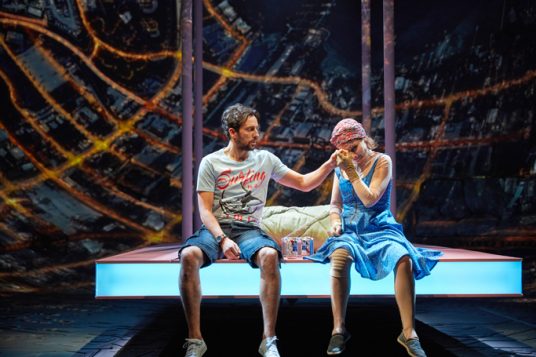 Ugly Lies the Bone at the National

Virtual reality is one of those things that most of us are aware of, but for many (me included), its uses don’t appear to extend much beyond teenage boys wearing a headset and playing the latest video game. In Lindsey Ferrentino’s new play, the technology is presented as an antidote to physical pain, specifically the pain felt by lead character Jess who has returned from a third term in Afghanistan where she fell victim to life-changing third-degree burns. Jess returns to her failing Florida hometown that is changing due to the end of the NASA Space Shuttle program—the cornerstone of the area. She is then tasked with slotting back into a place that has left her behind with injuries that mean she barely recognises herself and lives in constant pain.

Despite a pretty heavy premise, the show turns out light-hearted with numerous laughs to be had throughout. The scenes are short and snappy and interspersed with Jess’s experience in the VR clinic. Combining a recovery story with virtual technology is a pretty original idea, yet it never feels particularly ground-breaking here, which is both a weakness and a strength of the play. There isn’t too much meat in the text to get your teeth stuck into; however, the subtlety of the writing means the action is real and relatable. Indhu Rubasingham appears to have made a very conscious decision to focus on the relationships in her direction and instead of pressing VR into the story, she uses it only as part of a wider narrative. She avoids the temptation to make things overly dramatic and while there are moments with too much pretence for my liking (one scene depicting the voices in Jess’s head feels particularly off-kilter with the rest of the play), these are kept few and far between for the most part.

Naturally, a story exploring VR technology will require impressive visuals, and Es Devlin’s immense set does not disappoint: the stage is designed as a half dome with pieces of set sliding into place at different times. The best comparison I can think of is with ‘Cerebro’, the room used to find mutants in the X-men franchise (apologies for the niche reference!). During the VR scenes the stage is sparse and grey, filled only with Luke Halls’ effectively crafted video design. This works particularly well when contrasting the scenes in the real world that are created to look small and ordinary. Throughout the play Jess begins to recover in the fictitious world that has been created for her pain therapy, while in the real world things aren’t progressing nearly at the rate she’d like, and the set design is central in highlighting this point.

Kate Fleetwood has an incredibly challenging task on her hands as lead character Jess. Due to her character’s injuries, movement is limited and so she cannot rely on body language or facial expressions to convey her emotion; indeed, intonation in the voice is also partly restricted. Despite this, you always know exactly what Fleetwood is trying to show and it’s actually a very animated performance. Her character seems conflicted as to whether she feels a victim or not, and often struggles to hide anger and frustration with both her situation and the reactions of the people around her. Fleetwood also uses breathing and pauses in her voice to help convey these feelings, and this clever technique ensures that the audience stick with her story.

The other actors are very much supporting players to Fleetwood, and barring Ralf Little as former boyfriend Stevie, fail to get the most out of their roles. Little embraces the lovably awkward nature of his character, delivering many funny well-timed lines; his interactions with Fleetwood are the most interesting to watch and while in the most part are light and enjoyable, the tension below the surface is clear in both actors’ portrayals. Kris Marshall is also fun as the kind-hearted layabout Kelvin. His performance is not particularly deep but he’s satisfying in this happy-go-lucky part that has worked so well for him in the past. Olivia Darnley seems to struggle to get to grips with Kacie, the positive but progressively struggling sister of Jess. She overemphasises a lot of her lines, making it difficult to believe her character as a real person. It is clear that Kacie herself is struggling to understand how to act around her sister and so it is perhaps a directorial decision that Darnley ‘delivers’ rather than ‘says’ some of the lines directed towards Jess.

During the VR scenes, Jess is speaking to a voice played by Buffy Davis. Initially it is unclear whether this is also part of the VR but after a while it is revealed that it is actually a real person (if it had been the former then this may have added something more interesting). These conversations often feel a little stilted as there never seems to be much of a connection developed between the two characters. Rather, the voice seems to just provide an introduction for Fleetwood’s physical interaction with the set and video.

What the play does best is avoid focussing too heavily on the fact that it is using VR and the fact that it is a post-war recovery story. It’s a story about a person coming to grips with a life-changing tragedy that happens to include these elements. Certainly not without its problems, Ugly Lies the Bone is an enriching watch, sumptuously designed, delicately directed, and with a very commendable performance from Kate Fleetwood.