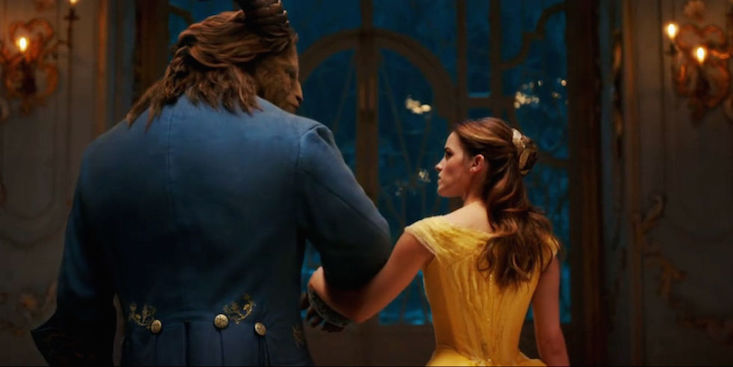 Beauty and the Sheep

I am a straight up sucker. Just take my money.

This is the dark truth of my movie consumption habits. A fatal flaw I’ve had to accept in my nearly 30 years of vociferous cinematic devouring. When people decry audience “sheep” who will see anything – I’m the sheep! I am a sucker for whatever remake, reboot, reimagining that the major studios want to send my way. And what’s worse? I freaking love it.

If every “adult” movie over the next ten years has super heroes, if Harry Potter gets remade into a TV show, if Disney decides to never again create original programming (except, of course, my beloved Moana) and instead just invests all their considerable resources in making less problematic versions of the movies that I loved as a child – sign me the hell up. I’m onboard. Take my money, please.

Beauty and the Beast is a beautifully rendered, well-acted (if slightly less impressively sung), flawed but lovely movie. A movie that takes some classic Disney tropes and tries its best to update them for today’s audience, while also deepening the mythology and justifying its own existence.

It also isn’t a particularly bold reimagining. Even the much ballyhooed transition of LeFou from “codedly gay” to actually gay is a two second, blink-and-you’ll-miss-it moment to cap off a movie full of gay-stereotype jokes. And while Watson imbues Belle with wit and grit and lots of other rhyming words that mean feminism, the story itself doesn’t particularly change her arc from kidnap victim to love interest. And the few new songs barely register within the pantheon of old greats.

And yet, I liked watching Belle walking through a pointedly diverse crowd of townfolks. And the additional Beast backstory – not to mention the surprisingly funny performance of Stevens – made the Beast a much more compelling romantic lead. And damn if I didn’t love watching Emma Watson dance along a gender-studies tight rope.

It helps that the movie is beautiful – with an attention to detail and no-expense-spared opulence that helps justify making the classic live action. It feels crafted with so much love and affection that, much like with last year’s truly fantastic The Jungle Book remake, it was hard not to get swept up.

Ultimately, your own taste for the remade Beauty and the Beast will depend a lot on your tolerance for change in your classic stories and your appreciation for what this remake is putting down. I’ve read reviews that criticized the movie for not changing enough, while also talking to fans who bemoaned every changed inflection note in “Be Our Guest”. It is what it is. For me, it is a wonderfully enjoyable imagining of a movie I very much so like – that also happens to take away some of the things I like less about Disney movies.

As long as I still get my Moanas, I’m a happy, Disney-fed, sucker.