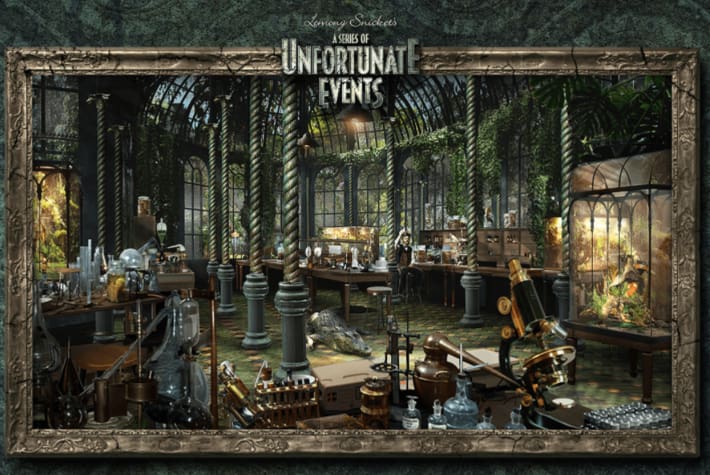 A Series of Unfortunate Events: The Reptile Room

A Series of Unfortunate Events continues to delight with “The Reptile Room”. While this adaptation of the second book of the series was fun, some pacing issues and gaps in logic made it a little less solid than “The Bad Beginning” parts 1 and 2. *Spoilers ahead*

Much of the success of “The Reptile Room Part 1” is due to a wonderful guest turn by Aasif Mandvi as the Baudelaire orphans’ new guardian, Dr. Montgomery Montgomery (no, that’s not a typo). I was only familiar with Mandvi from his work on The Daily Show, so was pleasantly surprised when I saw him in the trailers for the show. Mandvi did not disappoint in his portrayal of Dr. Montgomery, or “Uncle Monty”. He was a kind and enthusiastic guardian, and the kind of cool uncle every kid wants to have. (He lets the children hang out with reptiles all day! They eat Chinese food and go to the movies! He was going to take them on an expedition to Peru!)

Of course, this being a series of unfortunate events, good things can’t last, so Uncle Monty was killed by Count Olaf*. Olaf has disguised himself as “Stefano”, an assistant. While Olaf’s terrible alias is funny, it did create some logic problems within the show itself.

Granted, this is a show that gleefully rejects logic. The world and its rules vaguely resemble ours, but it’s also a world where three orphans are passed around from guardian to guardian like hot potatoes and no one bats an eye. But even allowing that the story takes place in an off-kilter fantasy world, some things still didn’t make sense. Uncle Monty is an old friend/associate of the Baudelaire’s parents, and is an active part of some secret organization that is actively interfering with Olaf’s plans. Which makes it strange that he doesn’t recognize Olaf. Instead, he thinks Stefano/Olaf is a spy sent by his herpetological rivals, and said so to Stefano/Olaf. It would make no sense to confront Stefano/Olaf by calling him a spy, if Monty knew he was actually Olaf. If he knew Olaf was Olaf, it would have made more sense for Monty to either a) call Olaf out on being Olaf and get backup from Jacquelyn or the ticket guy or b) continue pretending to believe Olaf’s disguise until he could get the children away safely. Instead, Monty called Stefano/Olaf a spy and kicked him out, causing Olaf to speed up his plans, which had disastrous results for Monty and the Baudelaires. So I have to assume Monty honestly thought Olaf was a spy, and didn’t recognize him.

This oversight on Monty’s part was a little too jarring to overlook. It didn’t make sense that an otherwise intelligent and competent adult who is in a secret organization would not notice when he’s face to face with a man who constantly fights with said secret organization. (It also made me scrutinize any of subsequent logic gaps, until I reminded myself a huge part of the show’s charm is its whimsy and that I should probably chill).

I do like the addition of Cobie Smulders and Will Arnett as the Baudelaire parents, who are alive, but too far away to help their children. (I was going to mention them in the review of The Bad Beginning, but wanted to leave their appearance as a surprise for anyone who hadn’t seen the first two episodes.) Smulders and Arnett are two actors whose careers I don’t obsessively follow, but am always delighted to see pop up. Their scenes at the end of the episodes are a fun addition, as is the addition of their associate Jacquelyn. It’s unclear exactly what the purpose of their secret organization is, except that they engage in vague spy shenanigans.

The vagueness is amusing for now, but eventually we’ll need some more answers. The Monty/Stefano/Olaf bungle gave me pause that it would play out in a satisfactory way. That being said, I think the inclusion of the secret organization was a good decision. The Reptile Room started to drag, especially in the second part. The Baudelaire parents, Jacqueline and the rest of that subplot filled some of the episode up, which helped the stop the dragging. Time will tell whether or not that storyline is just filler, or if it pays off in the end.

Overall, The Reptile Room was a mostly strong follow up to The Bad Beginning. What the episode did right (great guest star, funny one-liners, gorgeous visuals, and some good visual gags) far outweighed what it got wrong, so for now, I’m more excited than worried about the next story. On to The Wide Window!

* Olaf also killed Gustav, Uncle Monty’s assistant, who appeared briefly in the first few episodes. Was anyone else bummed Gustav didn’t miraculously survive? His and Jacquelyn’s relationship was fun in the few scenes they shared; I especially enjoyed their exasperated theater commentary in Episode 2.  RIP Gustav.